You've got to be kidding, GM

The transportation geek in me was piqued by the recent publication of a New York Times story on GM's efforts to market cars to Millennials. (The Atlantic's Jordan Weissman added his own analysis here.) Allow me to explain why.

GM approached my former employer about placing two types of Chevys on our campus. Apparently, someone in GM's young people marketing unit thought that our campus - due to the size of our student body and our location in a "car metropolis" - would be a good place to try to plant the seeds for making Chevy relevant to Millennials.

I was skeptical when I first heard about this in a small staff meeting. Parking is scarce for students on our campus. Also, our students are pretty price sensitive. I couldn't imagine many of them buying cars anytime soon. (See past articles about declining car ownership rates amongst young people.) also, I pointed out that GM has to overcome the bad rap they have with Millennials.

Many of us - myself included - grew up with a GM vehicle in their household. And more likely than not, that car was crap. Often, we saw first hand how GM produced cars that were reliable, clunky, and poorly finished.

Example: When the three-year warranty ran out on our Malibu, the water pump promptly needed to be replaced. Cost: $900. I drove the car sometimes as an adult, and I swore that I would never, ever, EVER buy a GM car.


Edit:
That said, I would have fulfilled my obligations as an employee to market and promote the cars had they ever arrived on our campus.  My employer and I wanted GM to figure out some sort of deal that would enable Zipcar, a vendor with whom we had a contract, to manage the cars. For reasons unknown to me, this was not possible. Instead, GM wanted to have WeCar (a subsidiary of Enterprise) manage the cars, which would have been more (unnecessary) work for me.

GM is also poorly regarded on our campus and amongst Millennials nationwide.

Example:  The "Reality Sucks" campaign. GM placed ads in university student newspapers (including mine) showing a "hot" woman smiling, flaunting her superiority to a cyclist:

Bike Portland was tipped off to this ad by an anonymous source, who just happened to be a professor at my place of employment.

Chaos ensued. We're talking thousands of negative posts on the GM Facebook page, countless angry tweets, and lots of coverage in the traditional and new media.

GM's efforts to increase its relevance amongst Millennials are not going very well. I think that had GM successfully placed the cars on our campus, students might have rented them. However, but I also think we would have also faced considerable criticism from various corners of our campus for partnering with GM, due to their bad reputation (car quality, insensitivity to cyclists and pedestrians, of which there are many on our dense campus).

I, in the meanwhile, will continue to ride the bus, a bike, or a Xootr Scooter: 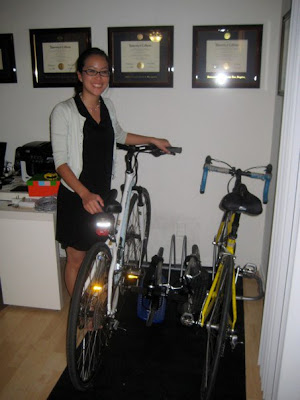