For me, all the news about Queen Elizabeth II's passing has brought thoughts that I did not know I had.   Her life and history were always embedded in our living history since the days of World War II, all the way up to this last week, and her role in life emerged as something that I did not really appreciate, until now.   It was easy growing up and being amused by much of the humor and snarky comments directed at the decadence of the monarchy as dysfunctional family members went about in awkward behavior.   To know that she had 15 Prime Ministers pass by, and was a party and witness to all of the upheavals, and how she was able to remain stoically in charge as the personification of "British Character" all these years.   So, it is now, that my wife has convinced me to join her, as she rewinds back to the first episode, and we will be watching "The Crown", with a renewed sense of history.
https://www.nytimes.com/2022/09/10/opinion/king-charles-queen-elizabeth-princess-diana.html?campaign_id=2&emc=edit_th_20220910&instance_id=71658&nl=todaysheadlines&regi_id=2318049&segment_id=106000&user_id=af58c63b30a52a2ca05d6e1633e35b95 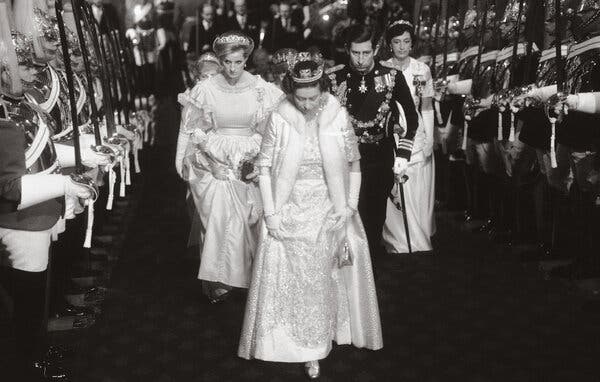 Queen Elizabeth II followed by Princess Diana, the Princess of Wales and Prince Charles, the Prince of Wales, arrive for the State Opening of Parliament in London on Tuesday, Nov. 6, 1984.Credit... Pool photo by Bob Dear, via Associated Press

WASHINGTON — His whole life, King Charles has been in the shadow of women with more star power.
First, his mother, the queen. Next, his first wife, Diana. Then, in recent years, Meghan Markle, with her breakaway from Buckingham Palace and her sensational Oprah interview alleging racism in the royal family.
As the women around him held the spotlight, the Prince of Wales spent decades trying to find himself and prove he was not a mere ornament, fretting that he did not want a life of polo and cutting ribbons.
I saw this dynamic up close, on the 1985 visit of Prince Charles and Princess Diana to Washington, four years after they married. They brought 7,000 pounds of luggage.

It's hard to remember, but in public, they seemed to delight in each other's company back then, with smiles, winks and teasing.

Charles was charming and self-deprecating, chatting with lawmakers and hoi polloi about everything from Baltimore architecture to the TV hit "Dynasty."
He was so smooth people compared him to Cary Grant. Even the biting British tabloid reporters on the trip were at a loss for a negative angle. "I think the myth of him being a wimp has been dispelled by himself," said James Whitaker, then The Daily Mirror's royal watcher.
But as the visit wore on, heads swiveled to Diana. If the royals are the last great silent film stars, as some say, here was Garbo.
Diana rarely spoke in public. She didn't have to. When the couple experienced Americana in a suburban mall, she unveiled The Look. She tucked her chin, then flashed those sky blues under her hooded lids and her hat brim — a look both shy and sulky.

Diana seemed to relish her ability to draw all attention wordlessly. Charles seemed to handle it well, but I wondered how it would work out in the long run. (It didn't.)

The capstone of the trip came when Nancy Reagan played fairy godmother to Cinderella at a White House dinner. Diana wore a midnight blue velvet gown and a pearl-and-sapphire choker. As the princess started tapping her fingers on the table and her feet on the floor to the music, Mrs. Reagan led over Diana's dance partner: John Travolta. The Marine Band had been practicing "Night Fever," and the glamorous pair twirled. "Diana's Saturday Night Fever," The Daily Mail trumpeted.
"She's a great little mover," Mr. Travolta pronounced afterward.
Diana was euphoric. No one seemed to notice if Charles was having a good time.
I was raised in an Irish family baked in bitterness about British oppression. The monarchy seems like an expensive relic to me, and I think King Charles, on the throne at last at 73, will struggle with a domain in which former colonies may consider dropping him as head of state.
I always thought of Queen Elizabeth as an avatar of nepotism and colonialism. But as time went on, and victimhood became the fashion, I began to have a creeping admiration for her stoicism.
Then, in 2011, I covered her fraught trip to Ireland, the first by a British monarch in a century. Suddenly I understood how one small movement of her head could soothe over 800 years of bloodshed and hatred.
The Irish were skeptical at first, not wanting to be treated as subjects. Gerry Adams complained the visit was too soon. (Maybe wait another century.) The queen's guards were skeptical, too. She had the tightest security ever on the island.

How could Queen Elizabeth move past the 1979 murder by the I.R.A. of her cousin Lord Mountbatten and his 14-year-old grandson? Some officials in the Irish government, after all, were former I.R.A. capos.

And how could the Irish move past the 1972 Bloody Sunday horror, when British forces gunned down 14 innocent civilians?
The queen spoke a phrase in perfect Gaelic and offered regret about how Britain had made Ireland suffer. She said both sides needed to be "able to bow to the past but not be bound by it."
She visited the Garden of Remembrance, a memorial to Irish patriots who died battling for independence, laying a wreath and bowing her head. She paid sartorial tribute with outfits by her Irish dressmaker: a gown featuring 2,091 hand-sewn shamrocks, hats trimmed in green feathers, an Irish harp brooch made of Swarovski crystals, ladies-in-waiting in 50 shades of green.
The queen showed all the empathy and warmth she could not summon when Diana died. By the end of the visit, the Irish had melted. They were calling Elizabeth their "prodigal mother," "Liz," and some were even waving Union Jacks. Her Irish guard of honor gave her the moniker "Eilis A Do," Gaelic for Elizabeth II.
The women who overshadowed Charles are gone now. We'll see what this new king can do, as he collects his prize in the primogeniture lottery and steps into a spotlight that's all his own.