Something to Know - 1 May

We are now able to see that Trump is desperately trying to find a scapegoat for all of his political problems.   His demonstrated inability to be presidential by not paying attention to his PDBs (president daily briefings) and other intelligence sources, put this nation way behind in preparing for and conducting an effective response to the Covid-19 Pandemic.   It has hit home in his slipping poll numbers, and "Sleepy Joe" is beating him.  He cannot stand this, and he is lashing out at anything that might stick on the walls to place blame.   His latest game is to try and blame the Chinese city of Wuhan for unleashing a lab-created virus on the United States (which is nothing more than an extreme right-wing conspiracy theory which has no basis in scientific findings).  Now, he and his trolls are stirring up noise on rolling back  CDC restrictions on lockdown measures, and the stooges are showing their ugly faces with Confederate flags and assault rifles on the steps of state capital buildings occupied by Democratic Party governors.  The nation is not falling for this, because people are scared....scared of getting sick, while there is no cure or vaccine for the virus.   If Trump would spend his energy and his position as president to effectively organize and secure the manufacture and distribution of PPE (protective personal equipment), he might get a favorable rating; but he does not, because he does not know how, and he is not listening to the needs and fears of the people.   He is his own worst enemy, and is incapable of understanding that he is so way over his head, and is doomed to failure.   David Brooks tells us how his latest game is not working:

Why the Trump Ploy Stopped Working 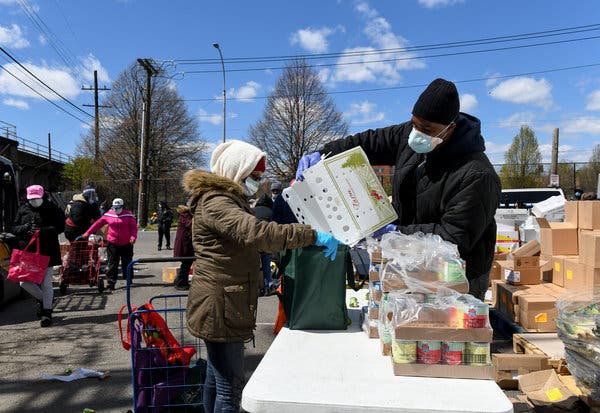 Even in a pandemic there are weavers and rippers. The weavers try to spiritually hold each other so we can get through this together. The rippers, from Donald Trump on down, see everything through the prism of politics and still emphasize division. For the rippers on left and right, politics is a war that gives life meaning.
Fortunately, the rippers are not winning. America is pretty united right now. In an ABC News/Ipsos poll last week, 98 percent of Democrats and 82 percent of Republicans supported social-distancing rules. According to a Yahoo News/YouGov survey, nearly 90 percent of Americans think a second wave of the virus would be at least somewhat likely if we ended the lockdowns today.
A Pew survey found 89 percent of Republicans and 89 percent of Democrats support the bipartisan federal aid packages. Seventy-seven percent of American adults think more aid will be necessary.
According to a USA Today/Ipsos poll, most of the policies on offer enjoyed tremendous bipartisan support: increasing testing (nearly 90 percent), temporarily halting immigration (79 percent) and continuing the lockdown until the end of April (69 percent). A KFF poll shows that people who have lost their jobs are just as supportive of the lockdowns as people who haven't.

The polarization industry is loath to admit this, but, once you set aside the Trump circus, we are now more united than at any time since 9/11. The pandemic has reminded us of our interdependence and the need for a strong and effective government.

It's also taken us to a deeper level. The polarization over the past decades has not been about us disagreeing more; it's been about us hating each other more. This has required constant volleys of dehumanization.
This dehumanization has always been a bit of a mirage. A new study from the group Beyond Conflict shows that Republicans and Democrats substantially exaggerate how much the other side dislikes and disagrees with them.
The pandemic has been a massive humanizing force — allowing us to see each other on a level much deeper than politics — see the fragility, the fear and the courage.
On May 8, I recommend you watch "In This Together: A PBS American Portrait Story," airing and streaming on PBS. It is just regular Americans talking into their cellphones and showing what they are going through.

There's a mom giving birth to twins while in the hospital with the coronavirus. She can't see her babies for weeks.
There are a couple of married nurses who have to send their 6-year-old to live with Grandma while they shuttle to the hospital. The boy can't understand what's happening, and the hurt and missing manifests as tantrums.
There's an older woman sitting in a dark living room: "I never expected to be alone. My husband tested positive for Covid. He lasted over a week. He didn't die until St. Patrick's Day. We're 78 and I know it sounds funny, but I thought we were going to grow old together. And now I'm alone."
We're also being united by those who are sacrificing for the common good: the nurse who came from North Carolina to serve New York even though she has an 8-month-old baby at home; the E.M.T.s who are living through death after death; the workers who lived in their factory for 28 days to make masks.
In normal times, the rippers hog the media spotlight. But now you see regular Americans, hurt in their deepest places and being their best selves.
Everywhere I hear the same refrain: We're standing at a portal to the future; we're not going back to how it used to be.
If you want to be there at one harbinger of the new world, I suggest you tune in to "The Call to Unite," a 24-hour global streamathon, which starts Friday at 8 p.m. on Unite.us and various digital platforms. It was created by Tim Shriver and the organization Unite. There will be appearances by world leaders, musicians, religious leaders, actors and philosophers — everybody from Oprah and George W. Bush to Yo-Yo Ma and the emotion scholar Marc Brackett.

When the streamathon was first being organized (I played an extremely minor role) the idea was to let the world give itself a group hug. But as the thing evolved it became clear that people are not only reflecting on the current pain, they are also eager to build a different future.
If you tune in, you'll see a surprising layers of depth and vulnerability. You'll see people hungering for The Great Reset — the idea that we have to identify 10 unifying ideas (like national service) and focus energy around them.
Americans have responded to this with more generosity and solidarity than we had any right to expect. I've been on the phone all week with people launching projects to feed the hungry, comfort the grieving, perform little acts of fun with the young. You talk with these people and you think: Wow, you're a hidden treasure.
The job ahead is to make this unity last.
--
****
Juan
CoronaTrump is a nasty virus, and if we distance ourselves like
Patriots, like a miracle it will all be gone in the Fall.
Posted by 1ma2t