Something to Know - 29 June

In the run-up to elections, we are often advised that voters gravitate to the economic issues of how one's wallet or purse is affected.   It seems as though now is the time to inject the decline of our stature in the world.  The current buffoon's red-light - green-light of playing his bullying games with sanctions and threats, plus his stupid antics that humiliate and demean allies, treaties, and long-standing friendships is causing us great harm.
Opinion 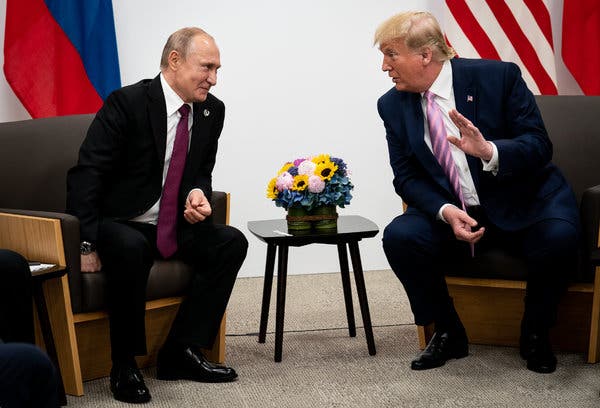 So Vladimir Putin, the Russian president, has told The Financial Times, "The liberal idea has become obsolete." It has, he says, "outlived its purpose." President Trump finds him amusing. In Japan, at the G-20 summit meeting, he wags his finger at Putin and says, with a grin: "Don't meddle in the election, President."
It's a measure of American decline over the past three decades that Putin's claim, however objectionable, is no longer preposterous and Trump's frivolity no longer surprising. Thirty years ago, the Berlin Wall fell. Two years later, the Soviet Union was gone. The liberal idea was triumphant, and American power virtually uncontested in "the unipolar moment."
That moment was heady. Liberalism posited the indivisibility of freedom and human dignity, as well as the idea that the rule of law and democracy offered the best chance for human advancement, peace and prosperity. Its spread appeared inevitable and irreversible. Its guiding spirit was the United States.
The road from that high-water mark of the American idea to Trump's autocrat-coddling indecency offers a story of squandered American opportunity and eroded American self-belief that Edward Gibbon would have qualified as "decline and fall." All Democratic candidates should be asked what they intend to do about it.


I can think of no better guide for reflection than William Burns's book, "The Back Channel," his wonderful memoir of a life in diplomacy. Burns, a former deputy secretary of state and ambassador to Moscow, was, by general consensus, one of the finest Foreign Service officers of recent decades, a man of unusual judgment and prescience. Suffice to say that back in 1993, in a memo to the incoming Clinton administration, he wrote:
"Democratic societies that fail to produce the fruits of economic reform quickly, or fail to accommodate pressures for ethnic self-expression, may slide back into other 'isms,' including nationalism."
Burns, now the president of the Carnegie Endowment for International Peace, attributes the loss of America's "unrivaled position of strength" in part to inevitable geopolitical trends, including the rise of China and India in the "Pacific century."
This was, however, compounded by what he calls "grievous missteps." They included the post-9/11 "inversion of force and diplomacy" that saw a disoriented United States lurch onto a "road to war in Iraq" that "was distinctive for its intensity and indiscipline."
In a debate on the legitimacy of going to war against Saddam Hussein, Burns listens to former Vice President Dick Cheney saying, "The only legitimacy we really need comes on the back of an M1A1 tank." He makes clear his own objections to the war — the "wrong time to shift our focus from Afghanistan" — but calls not making a "hard stand against war altogether" his "biggest professional regret." In a different context, I share that regret.
The unhappy sidelining and devaluation of diplomacy is a theme of the book. It has, for Burns, culminated in Trump's "savaging of American diplomacy" that has left "our friends confused, our adversaries emboldened, and the foundations of the international system we built and preserved for seven decades alarmingly fragile."


He writes of "unilateral diplomatic disarmament" under Trump, born of "equal parts ideological contempt and stubborn incompetence." The president's view of diplomacy is "narcissistic, not institutional," Burns observes, full of "muscular posturing and fact-free assertions" that insult allies and indulge autocrats.
Remember, all this comes from a supremely measured man who dedicated his life to the proposition that what diplomacy is all about is "not perfect solutions, but outcomes that cost far less than war and leave everyone better off than they would otherwise have been."
Among those imperfect but beneficial solutions was the Iran nuclear deal that Burns played a leading role in negotiating and that Trump called "the worst deal ever" before withdrawing from it. This, Burns writes, "was exactly the kind of risky, cocky, ill-considered bet that had shredded our influence before, and could easily do so again."
He notes: "Walking away from imperfect agreements, however, is rarely better than addressing their imperfections over time." Especially when that "walking away" leads the United States to the brink of an unnecessary war.
For Burns, the erosion of American power and influence long predates Trump. He regrets the loss of the extraordinary American cohesion that, at the end of the Cold War, secured the place of a united Germany in NATO. He notes the failure to perceive early enough how Russian "humiliation and wounded pride" would, under Putin, spur a Russian resurgence.
NATO expansion was, he suggests, "premature at best, and needlessly provocative at worst" — a debatable point in my view, given the need to secure and stabilize the liberation of more than 100 million long subjugated people in Central Europe and the Baltic States.
He thinks President Obama made a mistake by not upholding his "red line" against the Syrian regime's use of chemical weapons. The Obama administration "had blinked" and, Burns notes, "it would leave an enduring mark." Into that vacuum Putin strode.


Now the Russian president claims liberalism is obsolete. He is wrong. It is more necessary than ever even as Trump scoffs at it. But America's ability to promote liberal democracy cannot be served by what Burns calls "a State Department in which officers are bludgeoned into timidity, or censor themselves, or are simply ignored."
Related
Opinion | William J. Burns
How to Save the Power of DiplomacyMarch 8, 2019

The Times is committed to publishing a diversity of letters to the editor. We'd like to hear what you think about this or any of our articles. Here are some tips. And here's our email:letters@nytimes.com.
Follow The New York Times Opinion section on Facebook, Twitter (@NYTopinion) andInstagram.

Roger Cohen has been a columnist for The Times since 2009. His columns appear Wednesday and Saturday. He joined The Times in 1990, and has served as a foreign correspondent and foreign editor. @NYTimesCohen
--
****
Juan
I'd like to see Paris before I die... Philadelphia will do.
- W. C. Fields
Posted by 1ma2t