The presidential hopeful Republicans are going to a race.    The race (the contest, not the ethnic game) is going to be in Palm Springs.   They contestants are vying for the Koch Brother's checkbook.   Money, yes money from the elite of the wealthy of this nation is what drives these contestants to compete.   They will fawn (to give a servile display of exaggerated flattery or affection, typically in order to gain favor or advantage) at whatever gets attention and the nod from the Brothers Koch.  This is the driver of the morality and direction of the GeeOpie.  Interesting that Mitt Romney is not invited to this party - but then again he has his own money to play with:
http://www.nytimes.com/2015/01/21/us/koch-seminar-is-early-proving-ground-for-gop-hopefuls.html?emc=eta1 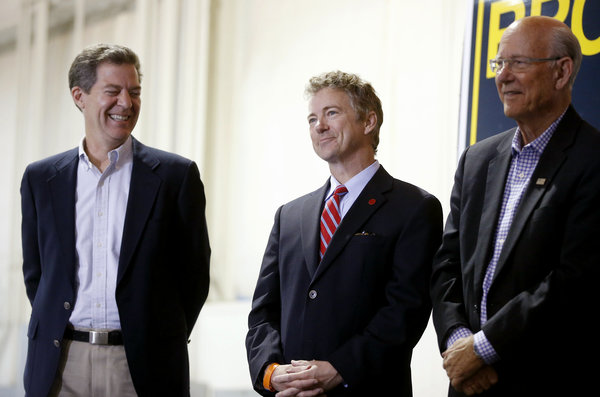 WASHINGTON — When Senator Rand Paul of Kentucky went to Kansas last year to campaign for Gov. Sam Brownback, he quietly requested a private meeting with the oil billionaire Charles G. Koch in his Wichita headquarters.

The senator's pitch: Of all the potential 2016 Republican presidential candidates, he best reflects the views of Mr. Koch and his younger brother,David H. Koch.

Similarly, Senator Ted Cruz of Texas popped through Wichita in October for an audience he had requested, and he told the elder Mr. Koch that theRepublican Party needed a grass-roots conservative like him to take back the White House.

And Gov. Chris Christie of New Jersey has worked to cultivate a relationship with the younger Mr. Koch, stopping by his Manhattan office, calling him to talk politics and socializing with him, their wives included.

"What they've built is incredibly impressive," said Phil Cox, who has worked for the Koch-affiliated group Americans for Prosperity and recently served as executive director of the Republican Governors Association under Mr. Christie as chairman. "The invitation to the seminar is a big deal. It's important entree to those donors and potential donors, and having Charles or David or other leaders in the network say good things about any particularly candidate at one of these seminars is a big deal."Perhaps no organization commands more deference in Republican politics nowadays than the sprawling operation established by the Koch brothers. And this week, the intense competition among Republicans for their embrace and attention will break out into the open. An invitation-only group of 2016 hopefuls will travel to a resort near Palm Springs, Calif., for the Koch brothers' annual winter seminar, kicking off the so-called Koch primary.

Mr. Cruz, Mr. Paul and Senator Marco Rubio of Florida have all received invitations to the event and are expected to attend. Other invited Republicans include Gov. Scott Walker of Wisconsin and Jeb Bush, the former governor of Florida, who is not expected to make it because of a scheduling conflict.

Unlike groups on the left like the A.F.L.-C.I.O., the Kochs do not hand out traditional endorsements. But their network spans roughly 300 donors, many of whom are wealthy business owners and entrepreneurs, and allows candidates to tap individuals who are conservative but not part of the traditional Republican donor establishment. In 2012, Americans for Prosperity spent more than $120 million in an effort to defeat President Obama and congressional Democrats.

Of course, the Koch network is hardly unified behind a single candidate, with donors preferring a wide range of personalities and issues. "It would be a mistake to view our donors as monolithic," said Marc Short, president ofFreedom Partners, an umbrella organization for donors allied with the Kochs. "They come from different geographic regions, but they are all committed to free markets and advancing a free society."

The network is still debating just how far into the Republican primary process to venture. Most likely, the Kochs and their affiliated groups will opt for an approach similar to the one they took in 2014; they will largely stay out of specific races and instead work to shape the Republican landscape to ensure that their core issues — fighting the Affordable Care Act, rolling back various energy and environmental regulations, and overhauling government spending and the tax code — rise to the top of the candidates' agendas.

But it is possible that one or both of the brothers, or a senior official of one of the affiliated groups, would individually endorse candidates, supporting them with money and events. Another option includes using issue-advocacy groups to support candidates they like and attack those they dislike.

Any audience with the Koch network provides Republican politicians with access to a valuable world. Candidates get the opportunity to pitch to the megadonors who can help them survive a grueling primary cycle. And even a subtle nod from the Koch brothers and their network — a high-profile speaking slot at an Americans for Prosperity summit meeting, or an invitation to the brothers' biannual seminars — confers upon prospective candidates a stamp of approval that begets donor support.

At an Americans for Prosperity summit meeting in Dallas in August, both Mr. Paul and Mike Pence, the governor of Indiana, asked for and received a private meeting with David Koch. Mr. Christie was unable to make the gathering, but a month later he attended a private dinner with donors at David's duplex on the Upper East Side of Manhattan.

"Whether we like it or not, one of the first primaries in either party is the fund-raising primary, and having access to that network helps you," said Greg Mueller, a Republican strategist. "Being before a Koch-like network of prominent conservatives, who have financial resources, helps put you on the path to clear those early primary hurdles."

In a speech Thursday, Tim Phillips, president of Americans for Prosperity, outlined what he described as the group's "ambitious, steady effort" for the coming election cycle, complete with a "substantial" financial investment. "We're going to be there throughout this year and the next year in 2016 and beyond," Mr. Phillips said.

In many ways, what has made the network so powerful is its evolution into an almost shadow version of the Republican Party, including a top-shelf data and analytics firm, niche organizations targeting groups like Latinos and veterans, and grass-roots activists and staff members around the country.

Still, the most influential figures remain David and Charles Koch, and the 2016 contenders are racing to solidify their personal relationships with them. Several Republicans with ties to the network said that Mr. Paul was considered ideologically close with Charles, while Mr. Christie has long ties to David.

When Mr. Paul met with the elder Mr. Koch in Wichita, the two spoke about foreign policy — where Mr. Paul's less hawkish approach most closely dovetails with the brothers' personal views — and the senator's ideas for overhauling the criminal justice system, another area where he and the libertarian-leaning Kochs align, according to someone with knowledge of the meeting who spoke on the condition of anonymity to discuss a private conversation.

Mr. Paul has also golfed with Charles. ("I remember Rand said Charles had beat him pretty handily," said a friend.) And Mr. Paul also shares a bond with Charles's son, Chase. Once, when Chase introduced Mr. Paul at an event, he began by talking about how he, too, could empathize with the pressures of growing up the son of a prominent libertarian and having to read Hegel and Ludwig von Mises.

Taking the microphone, Mr. Paul joked, "But did you get to read it in English?"

Mr. Christie began reaching out to David during his first run for governor. The two men spoke at least a half-dozen times last year in Mr. Christie's capacity as chairman of the Republican Governors Association. And in November, Mr. Christie and his wife attended a Giants-Cowboys game with Mr. Koch and his wife.

Mr. Pence is another rising Republican star who excites the Koch network. As a Midwestern governor, he is well positioned to run, many in the network believe, able to animate the conservative base but with a tone and a demeanor that also appeal to the party's establishment. And his roots in the Koch community run deep, with many former staff members from his days as a congressman now working within the brothers' network.

Mr. Walker, a fellow governor from the Midwest, has earned favorable reviews for his high-profile fight with unions in Wisconsin, and the Americans for Prosperity chapter in his state is one of the group's most active.

Another prospective presidential candidate who has been popping up at Koch events in recent years is Mr. Rubio. He delivered the closing speech at last year's summer seminar — a high-profile and carefully chosen speaking slot — and has been a frequent speaker at American for Prosperity summit meetings.

Mitt Romney, the 2012 Republican presidential nominee who recently said he was considering a third run for the White House, was notably not invited to this year's seminar, although he has not been invited in recent years, either.

For those with strong relationships in the Koch network, this week's gathering in the California desert will provide a critical early test of the race to win the Koch sweepstakes. The seminar, said Sheila Krumholz, the executive director of the Center for Responsive Politics, is as much for the candidates as for the donors.

"Everyone is on display," Ms. Krumholz said, "either being courted, or being interviewed for the job."