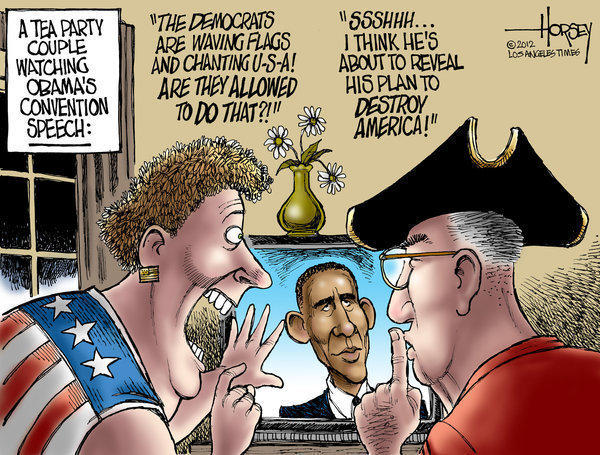 1.  David Brooks I think really likes Obama in a moderate Republican way, but does not want to say so.  Here, he reviews Obama's acceptance speech.  I have to say, that I went back after I sent out the 7 Sept. edition, and went through his speech again.  My admiration of the speech went higher.  Brooks was expecting something that soared with greater audacity than Obama has put forth before.  Perhaps that was my expectation, but I think that times have indeed changed, and Obama is very well aware of the political terrain that presents constant obstacles.  When an entire political bloc is against your agenda, no matter what it is, a smart person does not put the specifics in advance of the election.  A very strong and audacious plan to plot the changes that need to be made, and what Brooks expects, could be made when a solid legislative support system is in place.  If the Democrats could indeed take control of the House, and increase the Senate to a filibuster-proof majority, then a bold program could be rolled out and be executed.  What was not mentioned is the 3rd branch - the Supreme Court - and the nomination of upcoming vacancies, that has great impact on any president.  So, Brooks rightfully condenses his analysis and calls it "Character, not Audacity", which is about as good of a back-hand endorsement that Brooks is capable of right now.  He has already given us his take on Willard Mitt Romney, and we know that the GOP has no audacity, and is absent on Character:
http://www.nytimes.com/2012/09/07/opinion/brooks-why-democrats-lead.html?nl=todaysheadlines&emc=edit_th_20120907&pagewanted=print
2.   Morning Joe on the day after the DNC closes with Obama's acceptance speech, and continues the lovefest.  There is no comparison between the Tampa and the Charlotte shows.   "Romney just blew it":
http://www.huffingtonpost.com/2012/09/07/joe-scarborough-obama-speech-dnc_n_1864019.html
3.  Mitt's professed bluster on his foreign policy statement that Russia is the Number One Foe of the USA has drawn a reaction from Putin.  Thanks, Mitt, you really know who to make friends and influence people:
http://www.nytimes.com/2012/09/07/world/europe/putin-calls-missile-deal-more-likely-if-obama-wins.html?_r=1&ref=world&pagewanted=print
4.  A Laughing Mitt Romney describes the subject of our troops in Afghanistan as something that is not important in his speeches.   He says that when you address an audience, you talk about what you think is important, and you don't have to go through a laundry list.  So, Afghanistan is up there in Mitt's laundry list of topics that are not interesting enough to talk about:
http://www.youtube.com/watch?v=YQKmGYggADM
5.  A preliminary poll by the Gallup organization is showing Obama with a bounce that widens his lead 52% to 48%, from where it started of last week, after the Tampa Tango last week.  More definitive polls will be coming out next week.   Gallup is usually a more conservative polling organization, so the impact just may be greater in actuality:
xhttp://pollingmatters.gallup.com/2012/09/obama-bounces-up-to-52-approval-48-to.html
6.  In the battle between various state groups, the Department of Justice, ACLU, and similar groups against Republicans, it seems as though the GOP is losing most of the contests.  It is a shame that voter suppression is even an issue:
http://www.bloomberg.com/news/2012-09-07/republicans-losing-election-law-war-as-campaign-ramps-up.html
7.  Here is an excellent mix of graphs and pie charts that do a great job of explaining why/how our current method of health-care insurance spends $750 BILLION a year in waste and unnecessary charges.  This is the amount of money that is being used by both parties to explain where the money is coming from to support their agendas and plans.   Ryan is going to completely remove all of this money from the medical side and use it to support tax breaks for the rich, and let Medicare run out of money in 2016,  and then turn it into a voucher system, and let all the others who are/or were to receive health care to go with nothing.   Obama wants to take it to support Medicaid, and the millions now and who will benefit from the Affordable Care Act, and make modifications to reform Medicare.   It's all a matter of values.  Wreck what we now know as Medicare, and completely gut the medical care for those who are/and will  benefit from the  Affordable Care Act, or keep the money in the medical care system for all of our citizens so that no one goes without the benefit of access to health care.  That is what it is all about:
http://www.washingtonpost.com/blogs/ezra-klein/wp/2012/09/07/we-spend-750-billion-on-unnecessary-health-care-two-charts-explain-why/?hpid=z3
8.  Gail Collins has a political pop quiz for those of you political junkies who watched both conventions.   The quiz also tests your ability to make stuff up, if you didn't:
http://www.nytimes.com/2012/09/08/opinion/collins-convention-pop-quiz.html?ref=opinion&pagewanted=print
9.  With all the noise and angst coming over the political news highway and into our newspapers, radio, TV, and conversations, let's just take a break and read this wonderful story by Dick Cavett and his meetings with the late-in-life comedian, Stan Laurel:
http://opinionator.blogs.nytimes.com/2012/09/07/the-fine-mess-maker-at-home/?ref=opinion&pagewanted=print
10.  The LA Times Op-ed piece on "Tax Cheating or Tax Havens?" is really a "Tax Evasion for Dummies".   This piece most certainly provide the fodder for many questions for the presumptive brilliant business man from Bain, at the same time raising the hackles for all the wealthy who use off-shore banks to hide profits from taxation by the IRS.    If the average voter were to understand all of this, Mitt and his boys would think again about going out into the public arena seeking an elected office - Shame on you Mitt !!.   My solution to all of this is that Obama pushes through a law that effectively grants statehood to the Cayman Islands, and that we tax the hell out of it.   If we can't work it out on the statehood angle, let's just take it over under the rules of eminent domain:
http://www.latimes.com/news/opinion/commentary/la-oe-kleinbard-tax-cheats-20120907,0,6526020.story

"I was so naive as a kid I used to sneak behind the barn and do nothing."
-- Johnny Carson
"None are so busy as the fool and knave."
-- John Dryden
"It may be true that the law cannot make a man love me, but it can stop him from lynching me, and I think that's pretty important."
-- Martin Luther King Jr.
"There are three kinds of lies: lies, damned lies, and statistics."
-- Benjamin Disraeli
"It matters not whether you win or lose; what matters is whether I win or lose."
-- Darrin Weinberg
Posted by 1ma2t