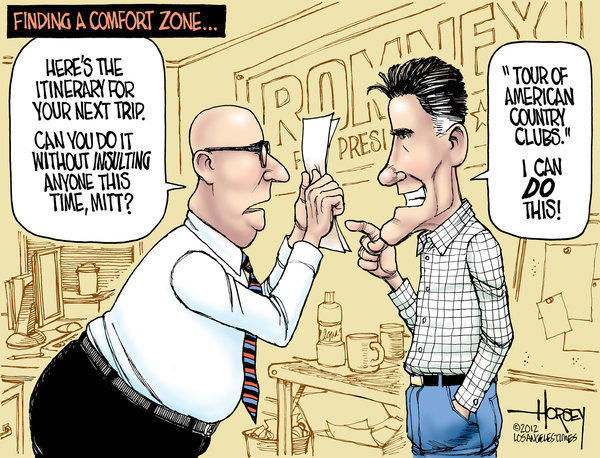 The NASA/JPL Rover "CURIOSITY" land on Mars and is in excellent operating condition.  This is a BIG Frickin Deal!!!!
1.  Leave it to the Brits.  There intrepid investigative news reporter staff can dig up the real stuff.  Here, refuting that the image the Romney says he lived under very austere conditions while a missionary in France.  It would not surprise me if the "leaked" tax returns for Romney's missing years will surface through a Brit tabloid:
http://www.telegraph.co.uk/news/worldnews/us-politics/8959440/US-election-2012-Mitt-Romneys-life-as-a-poor-Mormon-missionary-in-France-questioned.html
2.  The way the presidential candidates are perceived (their "likable or unlikeable " factor) seems to be a liability for Mitt Romney.   It may one of of the greatest reasons why he is destined to lose:
http://www.ibtimes.com/articles/370412/20120804/mitt-romney-personal-image-negative-pew-poll.htm

3.  This article comes out and says that what appear to be very inept gaffes are actually carefully calculated statements that are put out to piggyback on the bigotry and hatred that are already aimed at Obama.  If true, and in the direction that this is going, this is going to be a very nasty and shameful rest of the campaign session.  Out if it all, this will tear at the very fabric of our nation's soul:
http://www.salon.com/2012/08/05/mitt_romneys_culture_war/
4.  Articles like this are guaranteed to keep the Romney tax return issue front and center for the duration of the campaign:
http://slatest.slate.com/posts/2012/07/31/harry_reid_speculates_romney_didn_t_pay_taxes_for_10_years_.html
5.  There is an estimated $21 Trillion in wealth accumulated by the very rich sitting in off-shore tax havens to avoid taxes.   Patriotism and love of country is expressed in many ways.   Would someone like to explain to us what all this means?   I mean, isn't there some sort of commitment one has to this country to be called an American Citizen?   Is there some cut off where one no longer has to belong, but still enjoy all the goodies?:
http://truth-out.org/news/item/10710-super-rich-holding-21-trillion-overseas-to-avoid-taxation
6.  Add one more prominent Republican to the list that think that Romney should release his tax returns:
http://thinkprogress.org/politics/2012/08/05/640781/top-gop-strategist-pushes-romney-to-release-more-tax-returns-two-years-is-not-enough-obviously/
7.  This is the MAIN REASON TO SEE THE TAX RETURNS.  Seeing how the wealthy use the loopholes and all of the "rent-seeking" benefits of their tax code, we will see how it is that the very rich can pay almost nothing in taxes and still say that they broke no laws.  That's true - the tax codes benefit the very wealthy.   This is not fair.   Whether Mitt Romney is a tax cheat or a liar has nothing to do with it.  I want to see how the system is rigged.  Personally, I have a real problem with someone who knows that he's getting away with murder, and does not want to show anybody how he does it.  In Mitt's case, he is running to be president, and anyone who is hiding stuff like this should be trusted.   It was his choice to run for office.  He wants a leap of faith and trust to be given to him.   Show me the money, Mitt:
http://www.nationalmemo.com/what-romneys-taxes-tell-us-about-the-tax-code/
8.  Sheldon Adelson is the guy who financed Newt Gingrich, and the guy who financed the 30-minute "When Bain Came to Town" very anti-Romney TV ad.  Now, He's fully on to the Romney campaign with unlimited Big Bucks.  Sheldon also has corruption charges in association with his vast gambling casinos to answer for, along with investigations by the S.E.C.  So, why is the moralistic Mormon Mitt allowing this scum bag to get so close to him.  Is it only to prove that his Mittness has absolutely no values or integrity?:
http://campaignstops.blogs.nytimes.com/2012/08/06/embracing-sheldon-adelson/?ref=opinion&pagewanted=print

"Devotees of grammatical studies have not been distinguished for any very remarkable felicities of expression."
-- Amos Bronson Alcott
"Living hell is the best revenge."
-- Adrienne E. Gusoff
"I write down everything I want to remember. That way, instead of spending a lot of time trying to remember what it is I wrote down, I spend the time looking for the paper I wrote it down on."
-- Beryl Pfizer
"Addresses are given to us to conceal our whereabouts."
-- Saki
Posted by 1ma2t