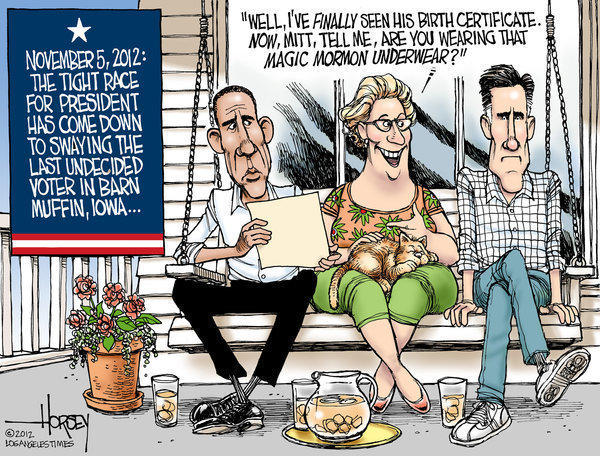 1.  We will be getting to know more about Paul Ryan from bits and pieces as we roll along to the GeeOpee/Tea Party Tent in Tampa.   Here's a piece that plays on the loosey-goosey theme attributed and disputed with Ayn Rand.  Also, we pick up where Ryan has picked up his financial wealth along the way (big inheritance), and how he really does like rent-seeking corporate welfare for those who are in his favor:
http://www.nationalmemo.com/selfishness-as-virtue-the-narcissistic-politics-of-paul-ryan/?utm_source=sendgrid.com&utm_medium=email&utm_campaign=website
2.  Four days into his campaign, Romney is having to live with his decision and terrible judgements.  Nothing is working for him, and you can see him and his handlers trying to throw out everything and anything to see what will work.   See and hear him here in a subdued and sadly morose demeanor crying out that Obama has taken the office of the presidency to new lows.   This is a defensive position when nothing else is working.  Is is that bad for him so soon?:
http://maddowblog.msnbc.com/_news/2012/08/15/13295056-when-anger-and-hate-replaces-jobs-and-the-economy?lite
3.  Here is a piece that admirably shows that the media is undertaking a more responsible journalistic approach to politics this time, rather than passive like the last time.   Here is Chuck Todd actually telling the Governor of Iowa that his charge that Obama is "weakening the work for welfare" aspect of a welfare law, while trying to tell him that it is a toll for the Governors to utilize, if they wish.   By all non-partisan and fact-finding sources, the Republicans are making false charges, and I admire the media for bringing this up rather than letting things slide:
http://thinkprogress.org/economy/2012/08/15/693381/branstad-welfare-waivers/
4.  As a side note to the chatter, here is a poll taken on those who are not likely or show no interest in voting.  They favor Obama by a huge margin.   This represents a challenge to the Obama team, and to those who do not want the RomRyan duo anywhere near the White House; work to get out the vote:
http://www.washingtonpost.com/blogs/the-fix/wp/2012/08/15/obamas-silent-majority/
5.  By tying Ryan to Romney, the Democrats know that they can win.  Romney put Ryan on his ticket to bolster it because Mitt was so lacking in anything, that Rafalca would have given him a boost on the ticket.  Now, Romney is going to have to suffer with the demonstrated paper trail of votes that are killers to voters.   What Romney got was an inconvenient booster shot of Nurse Ayn Rand's Tea Party Fix - and he can't handle anything even stronger than caffeine.   He's done:
http://www.washingtonpost.com/opinions/ej-dionne-how-paul-ryan-threatens-the-gop/2012/08/15/f70bfcdc-e703-11e1-936a-b801f1abab19_print.html
6.  Gail Collins does a great job with the flim-flam phrases compiled by the RomRyan duo to hide the actual cause and of their confusing medical plan, while also making people feel like they are being neglected by bringing in health care to all those who really have been neglected.  It all does nothing but heap confusing and shame on the GeeOpee:
http://www.nytimes.com/2012/08/16/opinion/collins-middle-age-blues.html?ref=opinion&pagewanted=print
7.  Timothy Egan does a brilliant presentation of Willard Mitt Romney.  It's like one of those gift wrapped presents that you open up by taking off the out layer of paper, and find another layer of wrapping under that, and then another , and another, etc.  You get to the center of it, and you have a whole lot of nothing of value or substance to talk about.   All you can really discuss is the lack of substance:
http://opinionator.blogs.nytimes.com/2012/08/15/romney-the-unknowable/?ref=opinion&pagewanted=print
8.  This piece from the New Yorker approaches the subject, again, on Paul Ryan and his initial infatuation with Ayn Rand, and his total emersion in her philosophy, and his gradual and almost total cherry-picking of ideas, when it does not suit him.   Come to think of it, he's into the etch-a-sketching game like his partner:
http://www.newyorker.com/online/blogs/newsdesk/2012/08/paul-ryan-and-ayn-rand.html?printable=true&currentPage=all
9.  Let's end it for today with the LA Times serving it all up in a short, non-sacharine, easy to digest summation of RomRyan after 5 days:
http://www.latimes.com/news/opinion/opinion-la/la-ol-romney-ryan-medicare-flip-flop-20120815,0,4604504.story
--
Juan

"One of the few good things about modern times: If you die horribly on television, you will not have died in vain. You will have entertained us."
-- Kurt Vonnegut
"A lot of people like snow. I find it to be an unnecessary freezing of water."
-- Carl Reiner
"Why be a man when you can be a success?"
-- Bertolt Brecht
"Mustard's no good without roast beef."
-- Chico Marx
Posted by 1ma2t