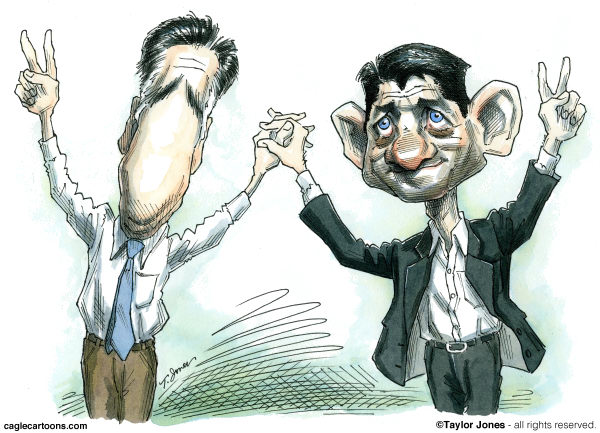 1.  We are going to be seeing much commentary on how Ryan's budget plan will affect all aspects of the Federal governance.  As stuff comes up, some will pass through here.  Especially hard hit will be federal employees who provide the day-to-day services that we depend on.  Justice Dept, FDA, Veterans Affairs, Homeland Security, CDC, etc, etc.  I suppose those who oversee the regulation of Wall Street will be gone as well.  It's not pretty.   The discussion will provide us a good definition of what it is our government is and what we want it to do.  That is good, and people, who have existed in apathy for as long as I can remember (probably some time after WW 2) will wake up and have to understand.   I for one, would not want to see the Food and Drug Administration gutted.  The somewhat adequate job that it does now, needs to be strengthened.   The stuff that is manufactured and we ingest cannot be subject to "Market Forces", as an example.   We'll talk about this more:
http://www.washingtonpost.com/blogs/federal-eye/post/paul-ryans-budget-plan-hits-federal-workers/2012/08/11/8953b832-e3a3-11e1-98e7-89d659f9c106_blog.html?wpisrc=nl_fedinsider
2.  The GeeOpee honeymoon is a wonderful boost for Romney, since he has deflected attention to his own lack of interest, lack of skills, and lack of character,  Whew..!   However, Paul Ryan is just another version of Voodoo Economics envisioned by Reagan, and later by the Bush reign.  It does not work.  Ryan is just a nice looking, well spoken messenger of an old tried and failed doctrine.  As the weeks roll on, this will all emerge, as well as the etch-a-sketch haze that Romney will try to apply on the differences.  Make no mistake, however, Romney is the guy who is running for president, and we still need to see his tax return so that we can understand him more.   Romney hiding behind Ryan is emblematic of Mitt's character, and that is NOT leadership:
http://www.nationalmemo.com/ryans-hope-voodoo-economics-still-isnt-a-plan/?utm_source=sendgrid.com&utm_medium=email&utm_campaign=website
3.  So, rather than show up his boss, Ryan is taking the same 2-year excuse to not release any more tax returns.   I really don't care about Ryan's returns, as much as I do Romney's.   If Ryan has been a congressman for the last 14 years, then he should show a very modest (in income for legislators) tax return - unless he somehow has millions stashed, which is hard to explain on income of less than $180,000/year.:
http://www.huffingtonpost.com/2012/08/12/paul-ryan-tax-returns_n_1770915.html?utm_hp_ref=daily-brief?utm_source=DailyBrief&utm_campaign=081312&utm_medium=email&utm_content=NewsEntry&utm_term=Daily%20Brief
4.  Two days into the Honeymoon, and the bridal pair seems to be having a rocky start:
http://www.nationalmemo.com/poll-paul-ryan-an-unpopular-pick-for-vp/?utm_source=sendgrid.com&utm_medium=email&utm_campaign=website
5.  Ryan's first day out on the stump, alone, at the Iowa State Fair.  He did not have a good experience in front of a bi-partisan crowd.  Not ready for prime time?:
http://www.washingtonpost.com/opinions/paul-ryan-on-soapbox-at-iowa-state-fair/2012/08/13/7a04d3c4-e598-11e1-8f62-58260e3940a0_print.html
6.  This is where the money behind Romney starts getting very dark and mess.  You remember Sheldon Adelson - the Las Vegas resident and big international casino mucky-muck?  He was bankrolling Gingrich. 'cause he thought he might pan out, but it was a bad bet (chump change).  Now, he's banking on Romney with big bucks.  Seems as though Romney as president would help him do better business dealings with the Chinese and Macau, and all the money laundering that goes on in international deals.  Mitt is real tight with Sheldon now.  Problem is, Adelson is tied to some nefarious and dirty deals in Asia, to the point that the Department of Justice is in some serious investigations.   It is one thing to be tied to Ryan's scheme to dismantle Medicare, but now Mitt has got his hands mixed in with some really dirty deals.   Not good:
http://www.nytimes.com/2012/08/14/us/politics/sheldon-adelsons-dealings-in-china-are-under-investigation.html?_r=1&ref=politics&pagewanted=print
7.  David Stockman, Reagan's Budget Director, has had plenty of experience on supply-side and Laffer economics (Voodooo?) to be able to detect and call out a rat.  His description of the Paul Ryan budget plan is less than complimentary, and says it is nothing more than a regurgitated mish-mash of the same B.S. that the Republicans have been inept in working out, and many, in fact, are running away from.  Anyway, Stockman's review of the Ryan Plan is not good news for his Mittness:
http://www.nytimes.com/2012/08/14/opinion/paul-ryans-fairy-tale-budget-plan.html?ref=opinion&pagewanted=print
8.  Roger Cohen does a pretty good job of appearing somewhat neutral about the campaign, but does hold hope that the BIG discussion that will inevitably redefine our purpose and mission to occur.   Cohen is clear about his likes and dislikes about the candidates, but he is even of stronger conviction about what some of the rhetoric means to certain segments of our population of they are disrespected,neglected, and disregarded:
http://www.nytimes.com/2012/08/14/opinion/cohen-saving-private-romney.html?ref=opinion&pagewanted=print
--
Juan

"Conscience is what makes a boy tell his mother before his sister does."
-- Evan Esar
"Here's a rule I recommend: Never practice two vices at once."
-- Tallulah Bankhead
"Every composer knows the anguish and despair occasioned by forgetting ideas which one had no time to write down."
-- Hector Berlioz
"Eternity's a terrible thought. I mean, where's it all going to end?"
-- Tom Stoppard
Posted by 1ma2t