Something to Know - 24 October

The mid-term election is coming soon.   The Republicans (better known as the MAGA Mob) think they have it in the bag because they assume that the public thinks they have a handle on economic policy and a very tough-on-crime reputation.   Well folks, that is all a bunch of MAGA droppings).   Recent history (from the 1920's to the present) has some good examples of poor economic strategy;  Hoover is blamed for the Wall Street mess of 1929, and it took FDR several years to clean that up - of course the economic boost from supporting the military during a war helped.   In recent years it appears that the Republicans get into power, screw things up, and the Democrats have to come in and clean up what huge tax cuts for the wealthy left behind.   Seems as though Republicans come in, and put into play tax cuts that benefit the rich, and cut back on programs that benefit the not-so-rich (like Medicare, Social Security, and investments in education, infrastructure, etc).    It is very clear that the GOP sees its role as creating economic policy for the top of the scale, but does nothing or take away from government actions that benefit and raise the standards of living for the rest of us.   As for being "tough on crime", how do you explain the MAGA disregard for the Rule of Law, when so many of them have ignored their oaths of office?  So, with this in mind, this article from Michael Hiltzik of the LA Times compares the recent disaster of the conservatives in the UK, who .....well, you can read the rest for yourself.   And then you have HCR for dessert:
https://www.latimes.com/business/story/2022-10-24/column-britains-prime-minister-followed-the-gops-economic-plan-the-markets-crashed-and-she-was-gone-in-44-days?utm_id=72775&sfmc_id=2418290 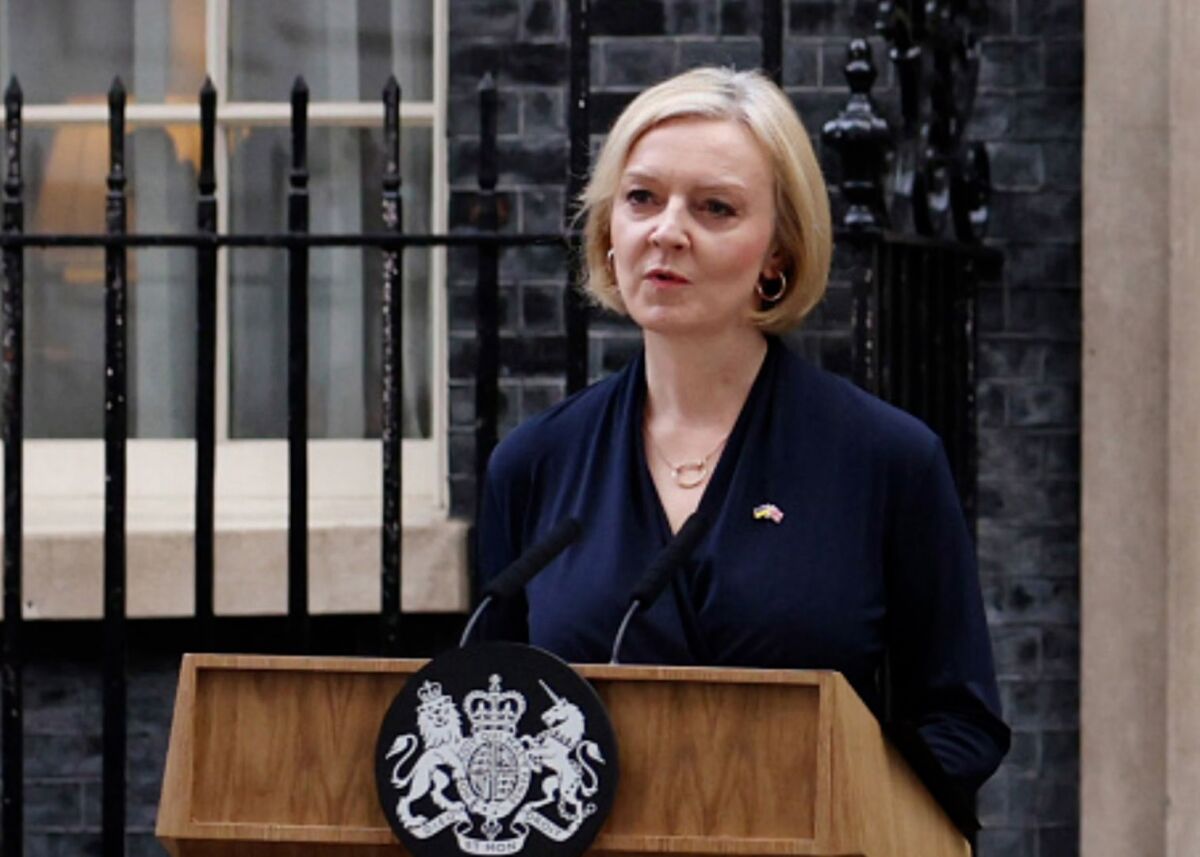 Former British Prime Minister Liz Truss announces her resignation on Oct. 20 following the collapse of a disastrous conservative economic plan
(Dan Kitwood / Getty Images / Wibbitz)
BY MICHAEL HILTZIKBUSINESS COLUMNIST
Fox Business talking head Larry Kudlow was over the moon on Sept. 23.
"The new U.K. Prime Minister Liz Truss has laid out a terrific supply-side economic growth plan, which looks a lot like the basic thrust of Kevin McCarthy's 'Commitment to America' plan," he told viewers of his daily program that day.
What got Kudlow vibrating was Truss' release of a budget plan that included cutting corporate taxes and slashing the top tax rate on the wealthiest Britons to 40% from 45%.

It's just very exciting that we finally got Thatcher back in Britain under the name of Liz Truss.
— Economist Arthur Laffer, shortly before Truss was ousted as Prime Minister
Kudlow, a former economic advisor to former President Trump, was correct that the Truss plan closely resembled Republican economic orthodoxy, which begins and ends with tax cuts for the rich.
What prompted him to mention House Minority Leader Kevin McCarthy (R-Bakersfield), was a bit of a mystery, however, since the published version of McCarthy's program is devoid of the details needed to make the comparison.

No matter, no matter. The point is that far from being "terrific," the Truss economic plan was a disaster from the start. The U.K. bond market plummeted, sending officials at the Bank of England scurrying to try to rectify the damage.
Britain's entire political establishment, from right to left, was aghast at Truss' proposal to pare the country's tax revenues by about $3.4 billion a year without offering any clue to how she would make up the deficit. The idea that the largest tax cut since 1972 would inspire a wave of entrepreneur-driven growth was widely derided.

Truss and her then-Chancellor (or treasury chief) Kwasi Kwarteng reversed course on the tax cut plan on Oct. 3, nine days after they proposed it. Truss fired Kwarteng 11 days after that. And on Oct. 20, a mere 44 days after taking office, Truss herself was forced to resign, marking the shortest tenure of a prime minister in British history.
If there's a lesson in all this, Kudlow hasn't voiced it. Whether he has commented at all on the fall of Liz Truss isn't clear — no clip of him doing so turns up in a search of the Fox Business channel website. (Fox Business did not immediately respond to a request for comment.)

But the Fox Business archives are chockablock with praise for Truss by other right-wing economic pundits, all aired in the first days of her premiership.
Here's economist Art Laffer on Kudlow's show on Sept. 28: "Now you're going to watch Britain perform — outperform — the rest of the world year-in, year-out going forward," Laffer exulted. "It's just very exciting that we finally got Thatcher back in Britain under the name of Liz Truss."
On Kudlow's Sept. 26 show, Stephen Moore, senior economist at the right-wing think tank FreedomWorks and another former member of the Trump economic brain trust, anointed Truss as a "hero" and a "superstar." Moore said, "It's hard to find anything not to like about what she has done so far."


All this cocksure commentary was accompanied by smirking sideswipes at what Kudlow called "business lefties" who were sounding the alarm about Truss at the outset.
We've reported before on the unerring talent of Laffer and Moore for being wrong about economic policy. The burst of praise for Truss and the rapidity with which her program collapsed is something new, however.
To paraphrase the late Joan Didion, they were offering analysis in which "measurable cerebral activity is virtually absent." The great press critic A.J. Liebling might have described it as "the futility of flapdoodle."


Didion was taking a swipe at Bob Woodward's vacuous books, Liebling at the lengthy period of uninformed speculation about the health of Joseph Stalin while he lay on his deathbed in 1953.
The wrong calls on the Truss program reflected a knee-jerk impulse of supply-siders to react to anything even remotely resembling the policies of Margaret Thatcher and Ronald Reagan with sedulous adoration.

This is a habit that only the most rock-ribbed conservatives in Britain itself continued to display, until "a new generation" of Conservative Party members of parliament, including Truss and Kwarteng, "called for a return to the free-market Thatcherite principles of low tax and supply-side reforms," observed the Financial Times, which no one would mistake for a liberal newspaper.
Their thesis, as it was under Thatcher and Reagan, was that "tax cuts would pay for themselves if they enabled the economy to grow."
The truth is that the Thatcher and Reagan revolutions did not allow the British and U.S. economies to grow in a way that benefited everyone. Their policies benefited only the rich. Moreover, today is not the 1980s and Truss is not Thatcher, whose nearly 12 years in office made her the longest-serving prime minister since 1885.

Among British economic observers, there were widespread doubts that the Truss tax cuts would have any measurable effect on growth, especially given the self-imposed headwinds facing the British economy. Comparing the impact of Thatcher's tax cuts to Truss' was sheer folly.
"Under Thatcher, the top rate was slashed from 80 percent to 40 percent," recalled Martin Wolf, the chief economics commentator of the Financial Times. "It is debatable whether even that improved performance significantly. This mouse of a change surely cannot do so.... For economic performance, these changes are totemic, not real. For income distribution, however, they will be perfectly real, not totemic."
Added Paul Johnson, head of the London-based Institute for Fiscal Studies, "It is a lack of productivity growth that has led to the stalling of earnings and living standards.... To a large extent, that lack of growth has been a choice. We have chosen not to invest in education, liberalise the planning system or stay in the European single market. The combined cost of this is huge."

Truss and Kwarteng surely knew that their policy would be ineffective and ruinously expensive. Days before announcing their plan, they fired Tom Scholar, the top civil servant at the Treasury, presumably because they knew he would speak out against the tax cuts. They refused to allow the Office for Budget Responsibility, an independent government fiscal watchdog akin to our Congressional Budget Office, to examine the plan.
As a result of these maneuvers and its basic structure, the Truss plan almost produced an immediate political pushback. The reduction of the top tax rate would directly affect only about 600,000 Britons with annual incomes over about $170,000 — almost exactly the top 1%.

As Johnson calculated, the very richest households, the 0.1% with incomes over about $680,000, would get a tax cut of about $22,500 each. Everyone else would see their basic tax rates cut only to 19% from 20%.
Meanwhile, most Britons would face cuts in government services as the government struggled to cover its increased deficit.
There are lessons in all this for the U.S., particularly for Republican policy makers. One is that clinging to Reagan-style economic policy-making won't help create growth. It didn't do so in the past and won't do so now. Another is that continuing to feed fat cats with tax cuts while impoverishing the rest of America has limited appeal, and eventually the public will get wise.

A third is that serious political leaders admit their mistakes. Truss did so, telling the BBC, "We went too far and too fast." (Not that her confession was enough to save her job.)
Kudlow, Laffer and Moore were spectacularly wrong about Truss and her policies. If they were honest analysts, they'd admit it. Supply-side economics has been a failure for most Americans. They and their GOP followers should stop clinging to the wreckage.