We are all very familiar and concerned with the attention-grabbing headlines every day.   It's to the point where one might just want to chuck it all and go someplace where there is no news, no access to any media, and into a serene environment where peace and the wonders of nature are the only matters of the day.   However, it ain't all that easy of an escape.   Add this story to the mix, and absorb the playpen and toys of those hell-bent on capitalizing on the authoritarian destruction of our democracy:
https://www.nytimes.com/2022/07/05/opinion/dobbs-christian-nationalism.html?campaign_id=2&emc=edit_th_20220706&instance_id=65875&nl=todaysheadlines&regi_id=2318049&segment_id=97710&user_id=af58c63b30a52a2ca05d6e1633e35b95

Christian Nationalists Are Excited About What Comes Next 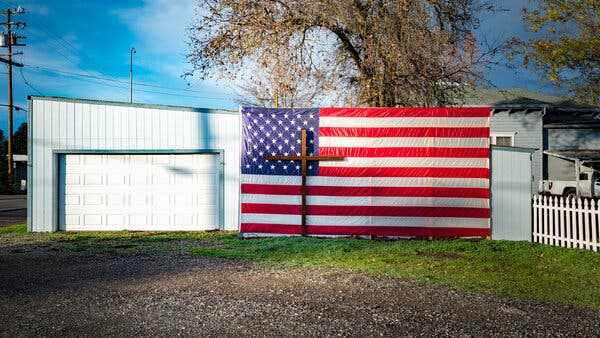 Ms. Stewart has reported on the religious right for more than a decade. She is the author of "The Power Worshippers: Inside the Dangerous Rise of Religious Nationalism."

The shape of the Christian nationalist movement in the post-Roe future is coming into view, and it should terrify anyone concerned for the future of constitutional democracy.
The Supreme Court's decision to rescind the reproductive rights that American women have enjoyed over the past half-century will not lead America's homegrown religious authoritarians to retire from the culture wars and enjoy a sweet moment of triumph. On the contrary, movement leaders are already preparing for a new and more brutal phase of their assault on individual rights and democratic self-governance. Breaking American democracy isn't an unintended side effect of Christian nationalism. It is the point of the project.
A good place to gauge the spirit and intentions of the movement that brought us the radical majority on the Supreme Court is the annual Road to Majority Policy Conference. At this year's event, which took place last month in Nashville, three clear trends were in evidence. First, the rhetoric of violence among movement leaders appeared to have increased significantly from the already alarming levels I had observed in previous years. Second, the theology of dominionism — that is, the belief that "right-thinking" Christians have a biblically derived mandate to take control of all aspects of government and society — is now explicitly embraced. And third, the movement's key strategists were giddy about the legal arsenal that the Supreme Court had laid at their feet as they anticipated the overturning of Roe v. Wade.

They intend to use that arsenal — together with additional weaponry collected in cases like Carson v. Makin, which requires state funding of religious schools if private, secular schools are also being funded; and Kennedy v. Bremerton School District, which licenses religious proselytizing by public school officials — to prosecute a war on individual rights, not merely in so-called red state legislatures but throughout the nation.

Although metaphors of battle are common enough in political gatherings, this year's rhetoric appeared more violent, more graphic and more tightly focused on fellow Americans, rather than on geopolitical foes.
"The greatest danger to America is not our enemies from the outside, as powerful as they may be," said former President Donald Trump, who delivered the keynote address at the event. "The greatest danger to America is the destruction of our nation from the people from within. And you know the people I'm talking about."
Speakers at the conference vied to outdo one another in their denigration of the people that Mr. Trump was evidently talking about. Democrats, they said, are "evil," "tyrannical" and "the enemy within," engaged in "a war against the truth."
"The backlash is coming," warned Senator Rick Scott of Florida. "Just mount up and ride to the sounds of the guns, and they are all over this country. It is time to take this country back."

Citing the fight against Nazi Germany during the Battle of the Bulge, Lt. Gov. Mark Robinson of North Carolina said, "We find ourselves in a pitched battle to literally save this nation." Referencing a passage from Ephesians that Christian nationalists often use to signal their militancy, he added, "I don't know about you, but I got my pack on, I got my boots on, I got my helmet on, I've got on the whole armor."

It is not a stretch to link this rise in verbal aggression to the disinformation campaign to indoctrinate the Christian nationalist base in the lie that the 2020 election was stolen, along with what we're learning from the Jan. 6 hearings. The movement is preparing "patriots" for the continuation of the assault on democracy in 2022 and 2024.
The intensification of verbal warfare is connected to shifts in the Christian nationalist movement's messaging and outreach, which were very much in evidence at the Nashville conference. Seven Mountains Dominionism — the belief that "biblical" Christians should seek to dominate the seven key "mountains" or "molders" of American society, including the government — was once considered a fringe doctrine, even among representatives of the religious right. At last year's Road to Majority conference, however, there was a breakout session devoted to the topic. This year, there were two sessions, and the once arcane language of the Seven Mountains creed was on multiple speakers' lips.
The hunger for dominion that appears to motivate the leadership of the movement is the essential context for making sense of its strategy and intentions in the post-Roe world. The end of abortion rights is the beginning of a new and much more personal attack on individual rights.

And indeed it is personal. Much of the rhetoric on the right invokes visions of vigilante justice. This is about "good guys with guns" — or neighbors with good eavesdropping skills — heroically taking on the pernicious behavior of their fellow citizens. Among the principal battlefields will be the fallopian tubes and uteruses of women.
At a breakout session called "Life Is on the Line: What Does the Future of the Pro-Life Movement Look Like From Here?" Chelsey Youman, the Texas state director and national legislative adviser to Human Coalition Action, a Texas-based anti-abortion organization with a national strategic focus, described the connection between vigilantes and abortion rights.
Instead of the state regulating abortion providers, she explained, "You and me as citizens of Texas or this country or wherever we can pass this bill, can instead sue the abortion provider." Mrs. Youman, as it happens, played a role in promoting the Texas law Senate Bill 8, which passed in May 2021 and allows private citizens to sue abortion providers and anyone who "aids or abets" an abortion. She was exultant over the likely passage of similar laws across the nation. "We have legislation ready to roll out for every single state you live in to protect life regardless of the Supreme Court, regardless of your circuit court." To be sure, Christian nationalists are also pushing for a federal ban. But the struggle for the present will center on state-level enforcement mechanisms.

Movement leaders have also made it clear that the target of their ongoing offensive is not just in-state abortion providers, but what they call "abortion trafficking" — that is, women crossing state lines to access legal abortions, along with people who provide those women with services or support, like cars and taxis. Mrs. Youman hailed the development of a new "long-arm jurisdiction" bill that offers a mechanism for targeting out-of-state abortion providers. "It creates a wrongful death cause of action," she said, "so we're excited about that."

The National Right to Life Committee's model legislation for the post-Roe era includes broad criminal enforcement as well as civil enforcement mechanisms. "The model law also reaches well beyond the actual performance of an illegal abortion," according to text on the organization's website. It also includes "aiding or abetting an illegal abortion," targeting people who provide "instructions over the telephone, the internet, or any other medium of communication."
Mrs. Youman further made clear that Christian nationalists will target the pills used for medication abortions. "Our next big bill is going to make the Heartbeat Act look tame, you guys; they're going to freak out!" she said. "It's designed specifically to siphon off these illegal pills."
Americans who stand outside the movement have consistently underestimated its radicalism. But this movement has been explicitly antidemocratic and anti-American for a long time.
It is also a mistake to imagine that Christian nationalism is a social movement arising from the grassroots and aiming to satisfy the real needs of its base. It isn't. This is a leader-driven movement. The leaders set the agenda, and their main goals are power and access to public money. They aren't serving the interests of their base; they are exploiting their base as a means of exploiting the rest of us.
Christian nationalism isn't a route to the future. Its purpose is to hollow out democracy until nothing is left but a thin cover for rule by a supposedly right-thinking elite, bubble-wrapped in sanctimony and insulated from any real democratic check on its power.

Opinion | Thomas B. Edsall
The MAGA Formula Is Getting Darker and Darker
May 18, 2022

Opinion | Katherine Stewart
Christian Nationalism Is One of Trump's Most Powerful Weapons
Jan. 6, 2022

Opinion | Katherine Stewart
Why Trump Reigns as King Cyrus
Dec. 31, 2018
Katherine Stewart (@kathsstewart) is the author of "The Power Worshippers: Inside the Dangerous Rise of Religious Nationalism."
--
****
Juan
The Republican Party - willing agents and representatives of the Gun Manufacturing and Ammunition Industry - "the lobby".
Posted by 1ma2t