Something to Know - 7 July

Today's offering is something that has been on my mind for quite a while.   It is the Democrat party and its disjointed messaging, or lack of an inspired response, to all that is going on.   I have suggested that the party borrow the playbook from the Lincoln Project.   Joe is a nice man, and I feel that he was the only one of the slate of possible candidates who could have won the 2020 election, and he did.   Now, we are dealing with a political situation that requires a full-throated and inspiring response to generate enthusiasm, with solid plans, and at the same time taking a bold stance against authoritarianism.   I could go on and on, but I won't.   There are only two political donations that I have given my money to so far; 1) The Lincoln Project, and 2) A member, and friend in Congress from Nevada.   Let this article speak for itself:
https://www.nytimes.com/2022/07/06/us/politics/biden-democrats-action.html?campaign_id=2&emc=edit_th_20220706&instance_id=65966&nl=todaysheadlines&regi_id=2318049&segment_id=97803&user_id=af58c63b30a52a2ca05d6e1633e35b95

Biden Promised to Stay Above the Fray, but Democrats Want a Fighter

President Biden's measured approach at a time of political tumult has left him struggling to inspire his supporters and allies to action. 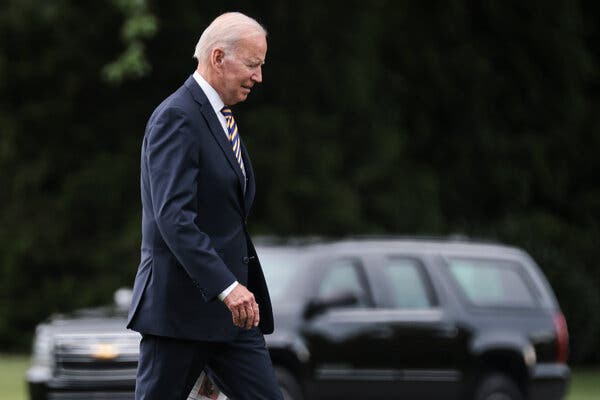 President Biden came into office promising competence and deliberative action, but he has recently appeared less engaged than many of his supporters had hoped.Credit...Oliver Contreras for The New York Times

July 6, 2022
WASHINGTON — Forty-eight hours after a horrific mass shooting on the Fourth of July, President Biden flew to Ohio on Wednesday for a speech on pension plans.
With inflation soaring and Democrats still fuming about the Supreme Court's decision to overturn Roe v. Wade, Mr. Biden's public schedule included no events or announcements on either topic.
And in response to last week's blockbuster testimony about the Jan. 6 attack on the U.S. Capitol, Mr. Biden has said almost nothing, pledging deference to the congressional committee investigating the violent assault on American democracy.

At a moment of broad political tumult and economic distress, Mr. Biden has appeared far less engaged than many of his supporters had hoped. While many Democrats are pleading for a fighter who gives voice to their anger, Mr. Biden has chosen a more passive path — blaming Congress, urging people to vote and avoiding heated rhetorical battles.

"The economy seems to be running out of control. Fundamental rights are being stripped away. And the White House just isn't coming with anything," said Bill Neidhardt, a former spokesman for Senator Bernie Sanders, independent of Vermont.
Inside the White House, administration officials say Mr. Biden has been quick to respond to the country's crises, even if he doesn't get the credit they believe he deserves.
The president came into office promising competence and deliberative action after four years in which his predecessor governed by angry Twitter posts and frequent tirades. By contrast, Mr. Biden touted his sober experience as a legislator, saying it would help him bridge ideological divides. And he campaigned on knowing how to wield the authority of the presidency after serving eight years as vice president.
Early in the president's term, Mr. Biden aggressively campaigned for a trillion-dollar economic stimulus by promising $2,000 checks for every American, a robust political effort that helped energize his supporters and aided Democratic victories in Georgia to capture control of the Senate. Mr. Neidhardt said few Democrats see the same kind of energy or passion from the president now.

On the big issues of the day, the president in recent months has often cited the limits of his power.
He notes that the Federal Reserve has "a primary responsibility" to fight inflation. On guns, he insists that Congress must do more. When it comes to college tuition, voting rights, the border, competition with China and more, Mr. Biden's usual answer is that it is up to lawmakers.
The Supreme Court's action on abortion, he said, was a "tragic error" — but not one that he can fix.

"The only way we can secure a woman's right to choose and the balance that existed is for Congress to restore the protections of Roe v. Wade as federal law," Mr. Biden said. "No executive action from the president can do that."
Legal experts say Mr. Biden's assessment of the constraints is accurate. But critics say his measured approach simply does not meet the moment, leaving him struggling to inspire his supporters and allies to action.
Activists, elected leaders, and everyday Democratic voters say they are eager for Mr. Biden to push the legal limits. Among the ideas: Establish abortion clinics on federal lands; demand an expansion of the Supreme Court; call for the prosecution of former President Donald J. Trump; push harder for tougher climate change regulations and legislation.

"I don't want always-mad-trigger-happy leaders," Amanda Litman, a progressive activist said on Twitter on Wednesday. "But staying calm & barely responding when the crises in front of us are massive — on abortion, guns, climate, democracy, etc — makes us feel like *we're* the crazy ones for thinking things are bad!"

The president's White House aides and closest allies reject the Democratic criticism as little more than misinformed or misdirected complaints.
"It's nice for Democratic leaders to come up with ideas," said Cedric Richmond, a former top White House adviser who is now working for Mr. Biden at the Democratic National Committee. "But if the ideas are illegal or if they don't work or if they place people in more harm, he's not going to do it."
Mr. Richmond, a former member of Congress from Louisiana, lashed out at Democrats for engaging in what he called a "circular firing squad" and said they are buying in to Republican claims that the president's party is destined to lose the midterm elections.
"To those Democrats that are nervous, anxious, scared, whatever you call it," he said, "go out, knock some doors, win some elections."
In Europe last week, Mr. Biden pushed world leaders to embrace a proposal to try to bring gas prices down. After months of study, Mr. Biden proposed a federal gas-tax holiday to reduce prices at the pump — an idea popular with Democrats. When the court struck down Roe v. Wade, he issued a series of executive orders aimed at ensuring some access to health services. And last month, he helped push through the first bipartisan gun safety legislation in decades.
White House officials noted that Mr. Biden delivered a forceful speech just hours after the court's Roe decision, calling it a "terrible, extreme decision." On guns, they said the president has been blunt and passionate, saying after the shootings at a Texas elementary school: "I am sick and tired of it. We have to act. And don't tell me we can't have an impact on this carnage."

Representative Ro Khanna, a Democrat from California, has called for more urgency from the White House, especially on economic issues. But he said Wednesday that the sniping about Mr. Biden from members of his own party is counterproductive and will only help Republicans win congressional elections this fall and the presidential contest in 2024.

"The Democratic Party needs to rally around President Biden heading into the midterms and heading into the president's re-election," he said. "If people have constructive ideas, they should share them. But they should do it in a spirit of strengthening this president's hand."
Mr. Khanna said Democrats need to find constructive ways to channel their anger and frustration about abortion, gas prices and other issues into action. He said the party's leaders should not hesitate to take actions like imposing more regulations on guns, restoring a woman's right to an abortion or making it easier for Americans to afford everyday goods.
"I guess my view of it is that we will have a lot more success doing that with constructive dialogue with the White House than taking potshots at the president," he said.

As Mr. Biden faces increased criticism, his approval ratings are taking a hit.
A Monmouth University poll released Tuesday put Mr. Biden's approval rating at 36 percent and found that a majority of Americans believe the federal government's actions are doing them harm. In a Harvard CAPS-Harris poll, 71 percent of those surveyed said they do not think the president should run for re-election.
In the meantime, other Democratic politicians are jumping into what they see as a void of leadership.
In the hours after the shooting in Highland Park on Monday, Gov. J.B. Pritzker of Illinois captured the attention of many Democrats with a blunt proclamation: "Be angry," he said, his words captured on television and later spread on social media. "I'm furious. I'm furious that yet more innocent lives were taken by gun violence."

Gov. Gavin Newsom of California, a Democrat running for re-election, ran a television ad in Florida on Monday that gave voice to the message that many members of Mr. Biden's party wish they would hear from him.

"Freedom, it's under attack in your state," Mr. Newsom said. "Republican leaders, they're banning books, making it harder to vote, restricting speech in classrooms, even criminalizing women and doctors," he added, in a barely veiled political attack on Ron DeSantis, the state's Republican governor and a possible candidate for president in 2024.
Grumbling among Democrats has been underway for weeks if not months, often focused on what they say is a failure to effectively communicate by Mr. Biden and his staff at the White House.
On Wednesday, Kate Bedingfield, the White House communications director and one of the president's longtime advisers, announced she will leave the administration soon. Top White House officials praised her work, and people close to her said she wanted to spend more time with her children after working for Mr. Biden for more than seven years.
Interviews with Democrats across the country earlier this summer showed a deep reservoir of frustration with Mr. Biden.
"The president needs to be more aggressive," David Walters, the former Oklahoma governor, said. Matt Hughes, a member of the Democratic National Committee in North Carolina, said Mr. Biden needed to offer a "full-throated campaign against Republican extremism." Radhika Nath, a former Colorado state co-chair for Mr. Sanders's 2020 campaign, cited a "lack of energy and enthusiasm" from the Biden administration.

But the sentiment appears to have deepened during the past several weeks, as inflation has risen, the court has ruled on abortion and blaring headlines describing mass shootings have become weekly occurrences.
In the face of one crisis after another, Mr. Biden has sought to explain his inability to offer solutions, in part by shifting the blame to other people or institutions.
Senator Mitt Romney, a Utah Republican, wrote an article this week decrying what he called a "sickness" in Washington's politics. He praised Mr. Biden for trying to improve things but lamented his inability to do so.
"President Joe Biden is a genuinely good man," Mr. Romney said. "But he has yet been unable to break through our national malady of denial, deceit, and distrust."


--
****
Juan
The Republican Party - willing agents and representatives of the Gun Manufacturing and Ammunition Industry - "the lobby".
Posted by 1ma2t