We are undergoing a barrage of definitions that try to explain who we are, what we believe, what we should think about believing, what is right and what is wrong, and actually what is up and what is down.   Structurally, we are the United States of America.   We are a product of what we grew up with, what we understood through the teachings of history, and current events.   We grew up with the basic understanding of a document called the Constitution, Democracy, the "pledge of allegiance", mom and apple pie.   It seems that we are at the stage where all we learned and believed is being thrust upon by a compacted blast of problems on being alive.   Types of governing, types of economic systems, globalization, global warming, human rights, daily gun violence and killings, dysfunctional government, personal freedoms, racial strife, hacking of personal identity, cyber attacks, and that is only page one of today's newspaper.   The top of the list, today, are Ukraine, and Putin - Facism, Authoritarians, Democracy.   Timothy Snyder, is a historian of political movements, and has this article in today's NY Times.  He is the author of a book that rose to great interest in the wake of Trump's surge to the presidency, and how bad stuff happens when you think it can't possibly happen (and it is now happening).   You can lump in all the bad guys we have had to live through in recent history (Hitler, Stalin, Mussolini, Franco, and now Putin), and they are all called Nazis, Communists, Authoritarians, etc), but they all wind up with the same tactics - dictators, violent oppresors of freedom, murderous bullies, and cult figures).   If you can absorb all the various points in Professor Snyder's presentation, you will have a better understanding of what is going on, and maybe where we should be going:
https://www.nytimes.com/2022/05/19/opinion/russia-fascism-ukraine-putin.html?campaign_id=2&emc=edit_th_20220520&instance_id=61868&nl=todaysheadlines&regi_id=2318049&segment_id=92819&user_id=af58c63b30a52a2ca05d6e1633e35b95

We Should Say It. Russia Is Fascist. 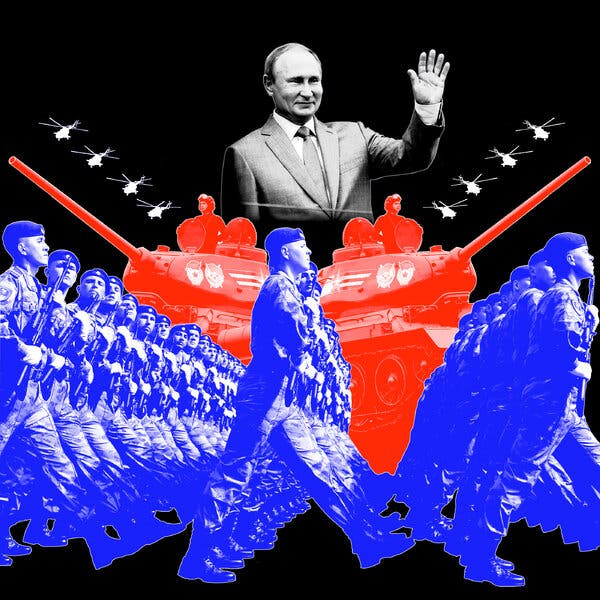 Dr. Snyder is a professor of history at Yale University and the author of many books on fascism, totalitarianism and European history.

Fascism was never defeated as an idea.

As a cult of irrationality and violence, it could not be vanquished as an argument: So long as Nazi Germany seemed strong, Europeans and others were tempted. It was only on the battlefields of World War II that fascism was defeated. Now it's back — and this time, the country fighting a fascist war of destruction is Russia. Should Russia win, fascists around the world will be comforted.
We err in limiting our fears of fascism to a certain image of Hitler and the Holocaust. Fascism was Italian in origin, popular in Romania — where fascists were Orthodox Christians who dreamed of cleansing violence — and had adherents throughout Europe (and America). In all its varieties, it was about the triumph of will over reason.
Because of that, it's impossible to define satisfactorily. People disagree, often vehemently, over what constitutes fascism. But today's Russia meets most of the criteria that scholars tend to apply. It has a cult around a single leader, Vladimir Putin. It has a cult of the dead, organized around World War II. It has a myth of a past golden age of imperial greatness, to be restored by a war of healing violence — the murderous war on Ukraine.
It's not the first time Ukraine has been the object of fascist war. The conquest of the country was Hitler's main war aim in 1941. Hitler thought that the Soviet Union, which then ruled Ukraine, was a Jewish state: He planned to replace Soviet rule with his own and claim Ukraine's fertile agricultural soil. The Soviet Union would be starved, and Germany would become an empire. He imagined that this would be easy because the Soviet Union, to his mind, was an artificial creation and the Ukrainians a colonial people.


The similarities to Mr. Putin's war are striking. The Kremlin defines Ukraine as an artificial state, whose Jewish president proves it cannot be real. After the elimination of a small elite, the thinking goes, the inchoate masses would happily accept Russian dominion. Today it is Russia that is denying Ukrainian food to the world, threatening famine in the global south.
Many hesitate to see today's Russia as fascist because Stalin's Soviet Union defined itself as antifascist. But that usage did not help to define what fascism is — and is worse than confusing today. With the help of American, British and other allies, the Soviet Union defeated Nazi Germany and its allies in 1945. Its opposition to fascism, however, was inconsistent.
Before Hitler's rise to power in 1933, the Soviets treated fascists as just one more form of capitalist enemy. Communist parties in Europe were to treat all other parties as the enemy. This policy actually contributed to Hitler's ascent: Though they outnumbered the Nazis, German communists and socialists could not cooperate. After that fiasco, Stalin adjusted his policy, demanding that European communist parties form coalitions to block fascists.
That didn't last long. In 1939, the Soviet Union joined Nazi Germany as a de facto ally, and the two powers invaded Poland together. Nazi speeches were reprinted in the Soviet press and Nazi officers admired Soviet efficiency in mass deportations. But Russians today do not speak of this fact, since memory laws make it a crime to do so. World War II is an element of Mr. Putin's historical myth of Russian innocence and lost greatness — Russia must enjoy a monopoly on victimhood and on victory. The basic fact that Stalin enabled World War II by allying with Hitler must be unsayable and unthinkable.
Stalin's flexibility about fascism is the key to understanding Russia today. Under Stalin, fascism was first indifferent, then it was bad, then it was fine until — when Hitler betrayed Stalin and Germany invaded the Soviet Union — it was bad again. But no one ever defined what it meant. It was a box into which anything could be put. Communists were purged as fascists in show trials. During the Cold War, the Americans and the British became the fascists. And "anti-fascism" did not prevent Stalin from targeting Jews in his last purge, nor his successors from conflating Israel with Nazi Germany.


Soviet anti-fascism, in other words, was a politics of us and them. That is no answer to fascism. After all, fascist politics begins, as the Nazi thinker Carl Schmitt said, from the definition of an enemy. Because Soviet anti-fascism just meant defining an enemy, it offered fascism a backdoor through which to return to Russia.
In the Russia of the 21st century, "anti-fascism" simply became the right of a Russian leader to define national enemies. Actual Russian fascists, such as Aleksandr Dugin and Aleksandr Prokhanov, were given time in mass media. And Mr. Putin himself has drawn on the work of the interwar Russian fascist Ivan Ilyin. For the president, a "fascist" or a "Nazi" is simply someone who opposes him or his plan to destroy Ukraine. Ukrainians are "Nazis" because they do not accept that they are Russians and resist.
A time traveler from the 1930s would have no difficulty identifying the Putin regime as fascist. The symbol Z, the rallies, the propaganda, the war as a cleansing act of violence and the death pits around Ukrainian towns make it all very plain. The war against Ukraine is not only a return to the traditional fascist battleground, but also a return to traditional fascist language and practice. Other people are there to be colonized. Russia is innocent because of its ancient past. The existence of Ukraine is an international conspiracy. War is the answer.
Because Mr. Putin speaks of fascists as the enemy, we might find it hard to grasp that he could in fact be fascist. But in Russia's war on Ukraine, "Nazi" just means "subhuman enemy"— someone Russians can kill. Hate speech directed at Ukrainians makes it easier to murder them, as we see in Bucha, Mariupol and every part of Ukraine that has been under Russian occupation. Mass graves are not some accident of war, but an expected consequence of a fascist war of destruction.
Fascists calling other people "fascists" is fascism taken to its illogical extreme as a cult of unreason. It is a final point where hate speech inverts reality and propaganda is pure insistence. It is the apogee of will over thought. Calling others fascists while being a fascist is the essential Putinist practice. Jason Stanley, an American philosopher, calls it "undermining propaganda." I have called it "schizofascism." The Ukrainians have the most elegant formulation. They call it "ruscism."
We understand more about fascism than we did in the 1930s. We now know where it led. We should recognize fascism, because then we know what we are dealing with. But to recognize it is not to undo it. Fascism is not a debating position, but a cult of will that emanates fiction. It is about the mystique of a man who heals the world with violence, and it will be sustained by propaganda right to the end. It can be undone only by demonstrations of the leader's weakness. The fascist leader has to be defeated, which means that those who oppose fascism have to do what is necessary to defeat him. Only then do the myths come crashing down.
As in the 1930s, democracy is in retreat around the world and fascists have moved to make war on their neighbors. If Russia wins in Ukraine, it won't be just the destruction of a democracy by force, though that is bad enough. It will be a demoralization for democracies everywhere. Even before the war, Russia's friends — Marine Le Pen, Viktor Orban, Tucker Carlson — were the enemies of democracy. Fascist battlefield victories would confirm that might makes right, that reason is for the losers, that democracies must fail.

Had Ukraine not resisted, this would have been a dark spring for democrats around the world. If Ukraine does not win, we can expect decades of darkness.

--
****
Juan
Only drug dealers, cartel bosses, scam artists, and other criminals trying to hide use burner phones.
Posted by 1ma2t