Something Else to Know - 8 October

My thanks to Charleen Krueger for bringing this to our attention.   Remdesevir is what Trump claims is making him feel so great, and that he wants all infected with the Covid-19 should get this for free.  The irony is that Trump in his demented petulant thinking was opposed earlier to further development and testing of this drug because it was coming from China.   So, he may now realize that his "China Virus" is being treated with a China Cure. 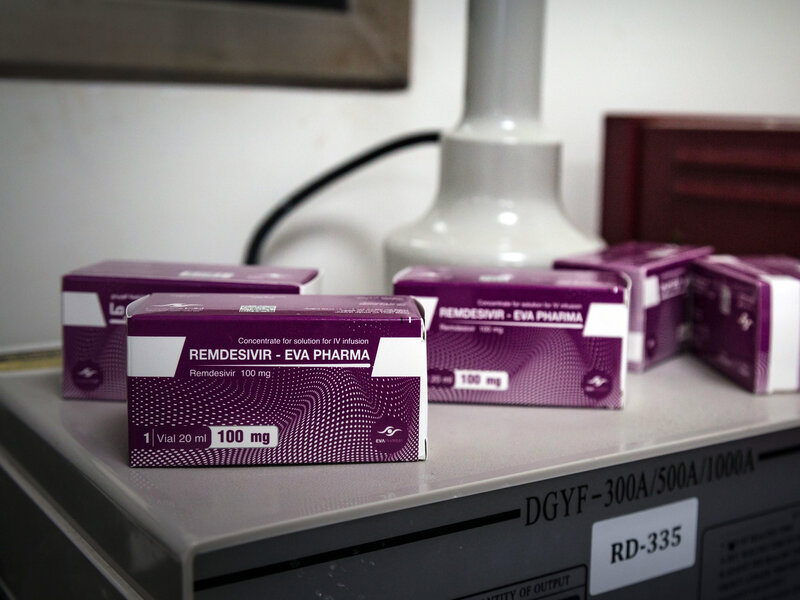 Boxes of remdesivir, an antiviral drug considered a promising treatment for COVID-19.

President Trump has credited the apparent improvement of his coronavirus infection to, as he put it in one tweet, "some really great drugs" that were "developed, under the Trump Administration."

For years Daszak led a U.S.-funded project that played an important role in the emergence of one of those drugs — remdesivir — as a promising treatment for COVID-19. Specifically, Daszak's U.S.-based research group, EcoHealth Alliance, collaborated with scientists in China to collect fluid samples from bats there in search of coronaviruses that could pose a threat if they spilled over into humans.

Beginning in 2014, virus experts in the U.S. tested remdesivir against some of the bat strains that EcoHealth Alliance had discovered. The results were promising — helping to elevate remdesivir's profile within pharmaceutical research such that, when the current coronavirus hit, the drug was one of the first options scientists proposed trying against it.

Yet in April the National Institutes of Health abruptly terminated funding for the China bat research project with no clear explanation. In the weeks earlier, Trump administration officials had been pushing a largely discredited theory that the Chinese lab that EcoHealth Alliance was partnered with – the Wuhan Institute of Virology – had accidentally released the virus causing COVID-19. And at a White House press conference days before the funding was pulled, Trump erroneously implied that the entirety of the money had gone to the Wuhan Institute and promised that his administration would take action on the issue.

After an uproar among scientists — including 77 Nobel laureates who sent a letter in protest — the National Institutes of Health said it would reinstate the grant in July. But officials have imposed conditions that Daszak says are unprecedented and purposefully impossible to meet: "One involves investigating the whereabouts of a lab technician who worked in Wuhan and who the conspiracy theorists say has disappeared mysteriously" — but with whom, Daszak says, his group never worked.

"It's extremely frustrating," Daszak says. "I understand what's going on. [The president] is not trying to undermine our organization specifically. He just wants to create a narrative that's anti-China." But he adds a little wistfully, "If collaborating with China on this work led to a drug that might help save his life, maybe that will turn him around and make him realize that this research is the sort of thing we need to be doing."

Another researcher who shares that hope is Mark Denison, a professor at Vanderbilt University who specializes in studying coronaviruses. Denison notes that the one causing the current pandemic — known as SARS-CoV-2 — is the third coronavirus to prove deadly to humans in the last 20 years, following SARS and MERS. So when it comes to the focus of his research, "I'm preparing for SARS-CoV-3."

But Denison adds that work is now hampered because EcoHealth Alliance has been effectively barred from discovering additional coronaviruses in China — which research suggests is a major reservoir for viruses that could cause future outbreaks. "We cannot be prepared for these things if we aren't looking ahead," Denison says. "We cannot close our research to what's out there."

For example, he says, it will be important to track how many other potentially deadly coronaviruses share a vulnerability of the current one: When making copies of itself, the virus uses a particular proofreading mechanism to ensure that errors aren't introduced into its genetic sequence. Disrupt the proofreading, and you prevent the virus from replicating inside the human body.

Denison and some collaborators at his lab — notably Clint Smith — first identified key aspects of this proofreading vulnerability between 2007 and 2014 in a coronavirus that causes hepatitis in mice. Denison then immediately went to the pharmaceutical company Gilead Sciences to ask if it had any experimental compounds that might interfere with the proofreading. "They had this immense panel [of options]," Denison recalls. And "one of the first they sent us was the parent drug of remdesivir."

When Denison's team put the drug into a petri dish with the mouse hepatitis coronavirus, it showed "tremendous" success. This sparked a collaboration with researchers at still more institutions — including Timothy Sheahan at the University of North Carolina at Chapel Hill.

At the time, another coronavirus — MERS — was circulating among humans. So "we were focused on developing MERS-specific therapies," Sheahan says. But there was also strong interest in ensuring they came up with a treatment that could work against many other coronaviruses as well — as Sheahan puts it, "not just one drug for one bug but a drug for many kinds of bugs."

That prompted Sheahan also to try remdesivir on two bat coronaviruses that EcoHealth Alliance had identified in China — as well as against the coronavirus that causes severe acute respiratory syndrome, or SARS, in humans.

These were experiments in petri dishes and mice. "But the potency of remdesivir against all the different coronaviruses we tested was high enough that it would make you excited and encouraged that this could perhaps work [against the virus] in a person," Sheahan says.

He notes that even if remdesivr hadn't been tested on the bat coronaviruses, its success against MERS and SARS would probably still have led researchers to prioritize testing it against the current coronavirus. (It also helped that remdesivir was more recently tested in humans against Ebola. And though it did not pan out as a cure for that virus, the clinical trial at least offered evidence of remdesivir's safety.)

Still, Sheahan says, the tests on the bat coronaviruses provided information that was "undoubtedly" useful.

Denison agrees, and he says this history behind remdesivir's development offers an important lesson: "This feels sometimes like it was fully formed from the head of Zeus: You know, there remdesivir was sitting on a shelf — let's try it in humans. But that was predicated on the availability of these bat viruses that allowed us to make predictions about the broad use of this drug."