Something to Know - 19 July

In case you need to know, HCR is posting about yesterday, but it is mostly a history lesson on the appreciation of what John Lewis has to offer.   Maybe proper grammar would be to say what he "had to offer", but he represents a legacy that will live on forever.   That is serious history.   Maureen Dowd has something else to talk about:

The Doctor Versus the Denier

Anthony Fauci's at the pool, but Donald Trump's in deep. 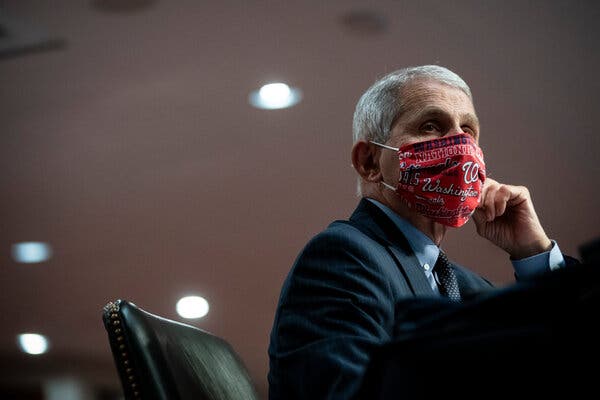 WASHINGTON — Never mind Johnny Depp and Amber Heard.
You want to see a real can't-look-away train wreck of a relationship? Look to the nation's capital, where a messy falling out is chronicled everywhere from the tabloids to a glossy fashion magazine, replete with a photo shoot by a swimming pool.
The saga has enough betrayal, backstabbing, recrimination, indignation and ostracization to impress Edith Wharton.
The press breathlessly covers how much time has passed since the pair last spoke, whether they're headed for splitsville, and if they can ever agree on what's best for the children.
It was always bound to be tempestuous because they are the ultimate odd couple, the doctor and the president.

One is a champion of truth and facts. The other is a master of deceit and denial. One is highly disciplined, working 18-hour days. The other can't be bothered to do his homework and golfs instead. One is driven by science and the public good. The other is a public menace, driven by greed and ego. One is a Washington institution. The other was sent here to destroy Washington institutions. One is incorruptible. The other corrupts. One is apolitical. The other politicizes everything he touches — toilets, windows, beans and, most fatally, masks.
After a fractious week, when the former reality-show star in the White House retweeted a former game-show host saying that we shouldn't trust doctors about Covid-19, Donald Trump and Anthony Fauci are gritting their teeth.
What's so scary is that the bumpy course of their relationship has life-or-death consequences for Americans.
Who could even dream up a scenario where a president and a White House drop oppo research on the esteemed scientist charged with keeping us safe in a worsening pandemic?
The administration acted like Peter Navarro, Trump's wacko-bird trade adviser, had gone rogue when he assailed Dr. Fauci for being Dr. Wrong, in a USA Today op-ed. But does anyone believe that? And if he did, would he still have his job?

No doubt it was a case of Trump murmuring: Will no one rid me of this meddlesome infectious disease specialist?
Republicans on Capitol Hill privately confessed they were baffled by the whole thing, saying they couldn't understand why Trump would undermine Fauci, especially now with the virus resurgent. They think it's not only hurting Trump's re-election chances, but theirs, too.
As though it couldn't get more absurd, Kellyanne Conway told Fox News on Friday that she thinks it would help Trump's poll numbers for him to start giving public briefings on the virus again — even though that exercise went off the rails when the president began suggesting people inject themselves with bleach.
"How did we get to a situation in our country where the public health official most known for honesty and hard work is most vilified for it?" marvels Michael Specter, a science writer for The New Yorker who began covering Fauci during the AIDs crisis. "And as Team Trump trashes him, the numbers keep horrifyingly proving him right."
When Dr. Fauci began treating AIDs patients, nearly every one of them died. "It was the darkest time of my life," he told Specter. In an open letter, Larry Kramer called Fauci a "murderer."
Then, as Specter writes, he started listening to activists and made a rare admission: His approach wasn't working. He threw his caution to the winds and became a public-health activist. Through rigorous research and commitment to clinical studies, the death rate from AIDs has plummeted over the years.
Now Fauci struggles to drive the data bus as the White House throws nails under his tires. It seems emblematic of a deeper, existential problem: America has lost its can-do spirit. We were always Bugs Bunny, faster, smarter, more wily than everybody else. Now we're Slugs Bunny.

Can our country be any more pathetic than this: The Georgia governor suing the Atlanta mayor and City Council to block their mandate for city residents to wear masks?
Trump promised the A team, but he has surrounded himself with losers and kiss-ups and second-raters. Just your basic Ayn Rand nightmare.
Certainly, Dr. Fauci has had to adjust some of his early positions as he learned about this confounding virus. ("When the facts change, I change my mind. What do you do, sir?" John Maynard Keynes wisely observed.)
"Medicine is not an exact art," Jerome Groopman, the best-selling author and professor at Harvard Medical School, put it. "There's lots of uncertainty, always evolving information, much room for doubt. The most dangerous people are the ones who speak with total authority and no room for error."
Sound like someone you know?
"Medical schools," Dr. Groopman continued, "have curricula now to teach students the imperative of admitting when something went wrong, taking responsibility, and committing to righting it."
Some are saying the 79-year-old Dr. Fauci should say to hell with it and quit. But we need his voice of reason in this nuthouse of a White House.
Despite Dr. Fauci's best efforts to stay apolitical, he has been sucked into the demented political kaleidoscope through which we view everything now. Consider the shoot by his pool, photographed by Frankie Alduino, for a digital cover story by Norah O'Donnell for InStyle magazine.

From the left, the picture represented an unflappable hero, exhausted and desperately in need of some R & R, chilling poolside, not letting the White House's slime campaign get him down or silence him. And on the right, some saw a liberal media darling, high on his own supply in the midst of a deadly pandemic. "While America burns, Fauci does fashion mag photo shoots," tweeted Sean Davis, co-founder of the right-wing website The Federalist.
It's no coincidence that the QAnon-adjacent cultists on the right began circulating a new conspiracy theory in the fever swamps of Facebook that Dr. Fauci's wife of three and a half decades, a bioethicist, is Ghislane Maxwell's sister. (Do I need to tell you she isn't?)
Worryingly, new polls show that the smear from Trumpworld may be starting to stick; fewer Republicans trust the doctor now than in the spring.
Forget Mueller, Sessions, Comey, Canada, his niece, Mika Brzezinski. Of the many quarrels, scrapes and scraps Trump has instigated in his time in office, surely this will be remembered not only as the most needless and perverse, but as the most dangerous.
As Dr. Fauci told The Atlantic, it's "a bit bizarre."
More than a bit, actually.