Something to Know - 18 April

A swirl of news, changes in what we see and hear, and a constant barrage of opinions is enough to bewilder anyone who is stuck in isolation day after day.   However, if you can back far enough away from the clatter, you just might think that the same old story out of the White House is running out of gas.  By that, I mean, there are rumblings from within the GOP that the old Rockefeller wing has decided to speak out and say that Trump is not really a Republican, and he has just about destroyed the traditional philosophies upon which the party is based.   On the other side, the con game of overpromising and underdelivering, and just flat ass lying is no longer working.  This column speaks to the developing crack in the political structure of Trumpism, and it scares the big boys who put him in there:

Trump and His Allies Are Worried About More Than November

The temporary imposition of popular relief programs in response to the coronavirus makes Republicans nervous. 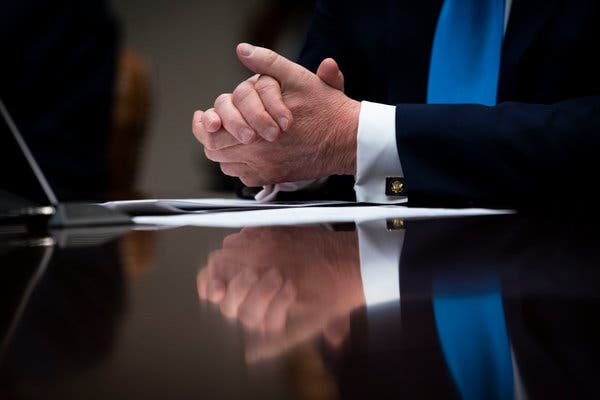 In the face of mass unemployment and a rapidly contracting economy, President Trump is desperate to end the pandemic lockdown and bring the country back on line. That's why he spent the past week asserting his "total" authority to reopen the economy ("The president of the United States calls the shots") and promising a rapid return to normal: "Our country has to get open, and it will get open, and it'll get open safely and hopefully quickly — some areas quicker than others," he said on Tuesday.
Republicans in Congress, likewise, are urging an end to the freeze. "It should have happened yesterday," Representative Andy Biggs of Arizona, chairman of the hard-line House Freedom Caucus, told Politico. Representative Trey Hollingsworth of Indiana acknowledged the chance of "loss of life" from an early end to social distancing but asserted, nonetheless, that it was better than the alternative. "It is policymakers' decision to put on our big boy and big girl pants and say it is the lesser of these two evils," he said to a local radio station. Senator John Kennedy of Louisiana was even more blunt during an interview on Fox News on Wednesday. "We gotta reopen, and when we do, the coronavirus is going to spread faster, and we got to be ready for it."
No doubt there is real concern for the economic and health consequences of an extended shutdown. But Republicans, and Trump in particular, are also thinking about November. If the president knows anything, it's that his fate rises and falls with the state of the economy. And if he loses his campaign for re-election, then in this polarized environment of nationalized politics, he's likely to take congressional Republicans down with him.
But I think there's another element underlying the push to reopen the economy despite the threat it poses to American lives, a dynamic beyond partisanship that explains why much of the conservative political ecosystem, from politicians and donors to activists and media personalities, has joined the fight to end the lockdown.

To even begin to tackle this crisis, Congress had to contemplate policies that would be criticized as unacceptably radical under any other circumstances. At $2.2 trillion, the initial relief package was a bill that was more than twice the size of the American Recovery and Reinvestment Act passed in 2009. Further aid is almost certainly forthcoming, and Democrats, at least, are contemplating trillions more in additional stimulus, including universal basic income for the duration of the crisis, a COBRA expansion that would cover 100 percent of health care costs for laid-off and furloughed workers and a proposal to cover payrolls for nearly every business in America. On top of all of this, the Federal Reserve is flooding the economy with trillions of dollars in rescue loans and bond purchases, to stabilize markets and keep interest rates low.
In one short month, the United States has made a significant leap toward a kind of emergency social democracy, in recognition of the fact that no individual or community could possibly be prepared for the devastation wrought by the pandemic. Should the health and economic crisis extend through the year, there's a strong chance that Americans will move even further down that road, as businesses shutter, unemployment continues to mount and the federal government is the only entity that can keep the entire economy afloat.
But this logic — that ordinary people need security in the face of social and economic volatility — is as true in normal times as it is under crisis. If something like a social democratic state is feasible under these conditions, then it is absolutely possible when growth is high and unemployment is low. And in the wake of two political campaigns — Bernie Sanders's and Elizabeth Warren's — that pushed progressive ideas into the mainstream of American politics, voters might begin to see this essential truth.
If the electoral danger for the Republican Party is that voters will blame the president for high unemployment and mass death — a reasonable fear, given how Trump loudly denied the threat in the face of warnings from inside and outside his administration — then the ideological danger is that it undermines the ideological project that captured the state with President Ronald Reagan and is on the path to victory under Donald Trump.

Republicans haven't openly expressed this, but they seem aware of it, to the extent that on the eve of approval of the first coronavirus bill, they tried to kill the most generous provisions of relief — an enormous expansion of unemployment insurance. The reason? "The moment we go back to work, we cannot create an incentive for people to say, 'I don't need to go back to work because I can do better someplace else,'" Senator Rick Scott of Florida explained on the Senate floor. In other words, we cannot help people so much that they can effectively bargain for better wages; crisis or not, we must discipline the working class.
There's no guarantee that Americans will respond to the pandemic and economic collapse with support for more and greater assistance from the federal government. But the possibility is there and it will become more apparent the longer this continues. If the rolling depressions of the late 19th century disrupted the social order enough to open the space for political radicalism — from the agrarian uprising of the Farmers' Alliance to the militant agitation of the industrial labor movement — then the one-two punch of the Great Recession and the Pandemic Depression might do the same for us.
In which case, it makes all the sense in the world for Trump, the Republican Party and the conservative movement to push for the end of the lockdown, public health be damned. After years of single-minded devotion, the conservative movement is achingly close to dismantling the New Deal political order and turning the clock back to when capital could act without limits or restraints.
But in trying to destroy the administrative state — in trying to make government small enough to "drag it into the bathroom and drown it in the bathtub" — conservatives left the country vulnerable to a deadly disease that has undermined that project and galvanized its opponents.
And all of this is happening as one of the most progressive generations in history begins to take its place in our politics, its views informed by two decades of war and economic crisis.
Yes, nothing is set in stone and, yes, events still have to unfold. But at this moment in American life, it feels as if one movement, a reactionary one, is beginning to unravel and another, very different in its outlook, is beginning to take shape.
--
****
Juan
Freedom's just another word for nothing left to lose.
- Kris Kristofferson
Posted by 1ma2t