Something to Know - 11 April

Wouldn't you know it. Trump is scrambling now to put together the program the Barak Obama had put in place to predict the rise of a pandemic, and which Trump cut back severely.  Pouring in a ton of money to the program, but isn't it kind of late?  Is he seriously trying to catch up with the current Covid-19, or the next pandemic?   He's a failure any way you look at it.
CALIFORNIA
Trump, Congress scramble to revive virus-hunting program that was marked for deep cuts 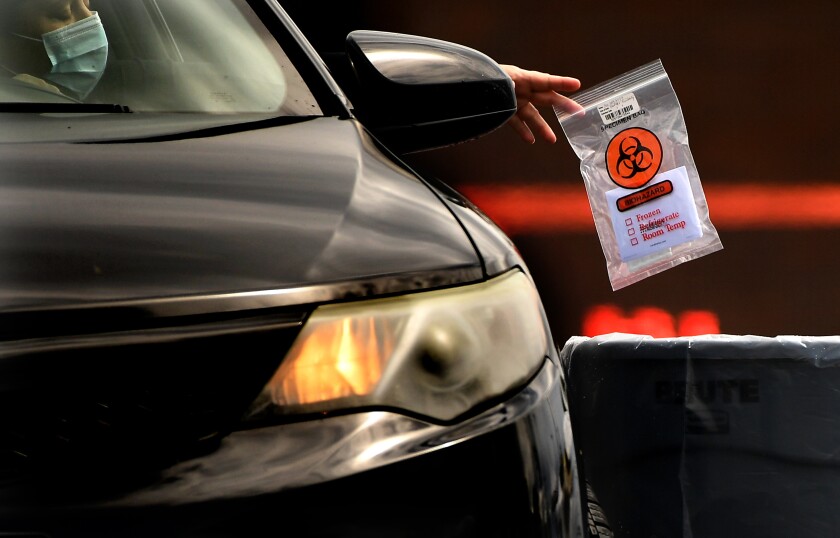 A specimen is turned in at a drive-through coronavirus testing site at the Charles R. Drew University of Medicine and Science in South Los Angeles
By JAMES RAINEY, EMILY BAUMGAERTNER
APRIL 11, 20203 PM

It's an obscure U.S. government bureau with many missions, including this vital one: hunting down viral diseases like COVID-19 that spill over from animals to the human world.
But in late 2019 it found itself without a permanent leader, and squarely in the Trump administration's budget-slashing sights.
That all changed with the coronavirus pandemic that has killed more than 20,000 Americans and more than 100,000 people across the world.
Now, the Global Health Bureau, part of the U.S. Agency for International Development (USAID), has abundant government support. Congress and President Trump have agreed to multiply the budget for the bureau's activities that can support "global health security" and related efforts as much as fivefold, to more than half a billion dollars. And its top leadership position — left empty for three years by the White House and a plodding Senate confirmation process — finally was filled in late March.
The funding boost, along with new leadership, will enhance the agency's ability to respond to the immediate crisis and bolster foreign health systems to protect against future outbreaks. It also could reboot stalled efforts to have the U.S. help lead a global quest to corral an estimated 1.6 million animal-borne viruses that threaten to leap to human hosts.
"With support from policymakers and the scientific community, we can do this — we have all of the tools and just need to harness the energy and the resources to get it done," said Jonna Mazet, executive director of the One Health Institute at the UC Davis School of Veterinary Medicine, who headed USAID's previous initiative to track dangerous viruses.

Outside experts caution that they have seen the U.S. beef up global health programs during past emergencies, like the 2014-16 Ebola epidemic, only to see funding wither when the crises subsided. "The U.S. government funding for this kind of work is completely episodic. There will be another outbreak — that's a given — and funding that comes in fits and starts doesn't allow for any real preparations," said Jennifer Kates, who heads global health policy research at the Kaiser Family Foundation. "Right now, we're just in response mode. The money is really important, but if the outbreak is as devastating as it could be, it won't go very far."

The injection of new funds increases the budget USAID devotes to this work to as much as $535 million, dwarfing 2019 funding of roughly $100 million for the programs. (It's unclear how much of the $535 million will be spent in the coming year.) That advance is even more notable given that the Trump administration's budget team previously proposed trimming global health security funding at USAID by 10% to a maximum of $90 million, according to the Kaiser Family Foundation.
The new money would be enough to allow the agency to extend the kind of work done by one of its key virus-hunting programs, called PREDICT. That program to allow early warnings about dangerous viruses had been allowed to go fallow, just two months before the deadly new coronavirus burst onto the world stage.
The failure to fully renew PREDICT dismayed infectious disease experts, who said chasing down the pathogens was a key to preventing future pandemics.

A Times story reporting on the demise of PREDICT created a furor and, like much of the responses to the coronavirus pandemic, quickly took on political overtones. Presumptive Democratic presidential nominee Joe Biden tweeted that the ending of the PREDICT program had been a mistake, adding: "Donald Trump's shortsighted actions left our nation ill-prepared to deal with this outbreak."
Dr. Alma Golden, the newly confirmed head of the Global Health Bureau, did not respond to a request for comment. The White House also did not respond to a request to discuss why it previously moved to trim USAID's budget for global health security or why the top job at the bureau was allowed to remain open for nearly three years.
In defending the demise of PREDICT, a USAID spokesman previously said that it was "just one component of USAID's global health security efforts and accounted for less than 20% of our global health security funding."
Dennis Carroll, the former head of the agency's Pandemic Influenza and Other Emerging Threats unit, said in an interview that the demise of the PREDICT project was the result of a variety of factors, including inattention from the Trump administration and excessive caution from some bureaucrats within USAID.

Carroll said he hopes the bureau will see the value in virus early-warning programs, like a start-up effort called the Global Virome Project, which he helps lead. PREDICT and the fledgling Virome Project focus on identifying viruses, in bats and other wild creatures, that could trigger epidemics or pandemics.
"What we are saying is that we have found Ebola and we can deal with Ebola," said Carroll, a renowned authority on infectious diseases. "But Ebola is just the tip of a very large large iceberg, and it's that unknown, what other viruses are in that iceberg — we need to get a better handle on that. And what PREDICT, and now the Global Virome Project, are about is trying to move from the unknown into the known, so that we can manage these risks."
The benefit to the U.S. and to other nations of Virome's work would be the creation of a worldwide database of potentially dangerous pathogens, said Carroll. "At some point, there will be a nice handover from the Global Virome Project, identifying clear, high-value, high-risk, newly identified viruses that are circulating in wildlife," he said. "Then we will know [the viruses] that have the pedigree to wreak havoc among human populations."
The Global Virome Project incorporated in February, with Carroll as its chair. Its leadership team includes infectious disease authorities like Mazet, who was the PREDICT global director for a decade.


Carroll blamed the lack of support for the virus-hunting work in the past in part on the Trump administration's wider disdain for foreign aid. A review of recent budgets by the nonpartisan Congressional Research Service showed that the Trump team had proposed a 21% overall slashing of programs at the State Department and related agencies, like USAID.
Congress generally has fought off such moves, including proposals last year that would have cut one-quarter of the funding for environmental protection and slashed more than 60% of funds for clean water, sanitation and related "micro-enterprises." The Trump administration, meanwhile, proposed an 80% increase in funding for the Women's Global Development and Prosperity Initiative, a $100-million program rolled out in 2019 by Ivanka Trump, according to the Congressional Research Service.

Carroll said that, at least in the past, the administration saw no value "in terms of the larger issues of building foreign assistance and capacities for countries around the world and taking leadership on that."
PREDICT discovered about 1,200 new viruses. And the initiative that USAID plans to launch this fall, dubbed the STOP Spillover Project, will work to cut off the "amplification, and spread" of these so-called zoonotic pathogens.
Experts estimate there may be 1.6 million in the animal world with at least a potential to be some threat to humanity and STOP Spillover does nothing to hunt down and catalog those unidentified threats, Carroll said. That was the mission envisioned by Carroll for the new Global Virome Project.
But the proposal ran into obstacles inside USAID on several fronts before the current pandemic, said Carroll, who left the agency in August.


The Global Health Bureau lacked a permanent leader for most of the time since Trump took office. The White House did not name Golden to head the bureau until April 2019. It then took almost a year, until March 20 — as the pandemic was exploding — for the Republican-controlled Senate to approve Golden, a respected physician who ran a string of clinics for the poor in Texas.
Carroll, who studied the molecular mechanics of viral infection at the acclaimed Cold Spring Harbor Laboratory in New York, said that he was cautioned by lawyers within USAID about his intention to help lead the new Global Virome Project.
"I couldn't create the Global Virome Project while I'm a U.S. government employee," Carroll said. "That was a serious legal issue. … U.S. agencies, by law, are not allowed to establish NGOs [nongovernmental organizations]. They were very cautious about that, and rightfully so."
His retirement eight months ago cleared the way for him to launch the Global Virome Project, which obtained its nonprofit status in February, Carroll said. He said the organization hopes to land about $20 million in funding from the U.S. government.
Experts agree the U.S. must be better prepared for the next pandemic.
"It's a feature of global health security that we don't do preparedness well," said Kates of the Kaiser Family Foundation, "and there's no clear road map to set out and change that. We need to be shoring up for future defense."
--
****
Juan
Freedom's just another word for nothing left to lose.
- Kris Kristofferson
Posted by 1ma2t