Something to Know - 25 March

Our daily TV fare has the governor of New York, the Governor of California, and our local big city mayor all trying to explain and inform.   Then we have the current occupant of the White House, who is totally disconnected from what the other guys are saying.   One question:  Trump says he wants to re-open everything and have everybody go back to work by Easter.   As Lawrence O'Donnell said last night, that Trump has disconnected himself from any responsibility and he cannot re-open anything because he did not close anything.   It is the governors and city mayors who took it upon themselves to shut things down.  This will be an interesting Constitutional crisis that could be looming soon.   Oh, and another question, how are people who ride public transportation to work going to "social distance" themselves on buses, trains, and subways and not catch or infects others?
https://www.nytimes.com/2020/03/24/opinion/coronavirus-trump-economy.html?campaign_id=2&emc=edit_th_200325&instance_id=16984&nl=todaysheadlines&regi_id=2318049&segment_id=22794&user_id=af58c63b30a52a2ca05d6e1633e35b95
We're Relying on Trump to Care About Our Lives
Will he, given his obsession with the economy?
Frank Bruni
By Frank Bruni
Opinion Columnist
March 24, 2020 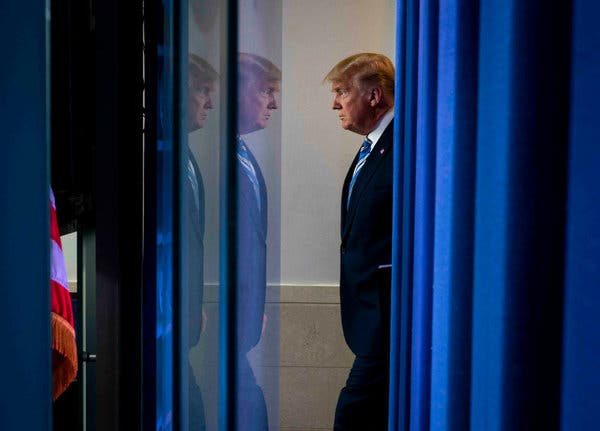 President Trump on his way to the White House briefing room on Monday.
Listening to our marginally articulate president the other night, I suddenly understood: The economy wasn't merely his pride. It was more like his lover. He can't get enough of it. He won't be kept from it.
Ain't no mountain high enough. Ain't no pandemic grim enough.
Briefing after briefing, I see it, sense it: how he itches to feel that rush again. He digresses from the terrifying present and uncertain future to revisit the heady past, when he lavished trinkets on the Dow and it purred on cue, telling him how potent he was.
Having it turn on him is more than he can bear. It has addled him — I mean even further. "Our country wasn't built to be shut down," he said during the White House briefing on Monday evening, as if other countries planned their own obsolescence. He repeated those words — "this is not a country that was built for this; it was not built to be shut down" — and then trotted them out yet again at a town hall on Fox News on Tuesday, apparently convinced that their profundity demanded it.

He also boasted — for the zillionth time — about how the economy just before the pandemic was the best economy ever. Those lips! Those eyes! They'd be reunited, he and his amour. They'd be together again when the credits rolled.

My metaphor may be lighthearted but my concern sure as hell isn't. There are difficult choices ahead, because what's necessary to save lives and what's necessary to salvage livelihoods are in tension. Our leaders have to figure out how much disruption is too much disruption.
That's the calculus that Trump is signaling with his and his allies' new favorite refrain: "We cannot let the cure be worse than the problem."

That's what was on his mind when, during the Monday briefing, he insisted that the health and economic threats of the coronavirus were separable. "We are not going to let it turn into a long-lasting financial problem," he said. "It started out as a purely medical problem, and it's not going to go beyond that."
News flash: It already has. But that aside, the president is acknowledging a genuine and intensifying debate over whether social distancing, if enforced too rigidly and for too long, could leave so many people destitute, isolated and despairing that what America sacrifices rivals what it gains.

"Look, you're going to lose a number of people to the flu," he said during the town hall. "But you're going to lose more people by putting a country into a massive recession or depression."
That unease is hardly confined to the president and to glib conservative supporters of his like Dan Patrick, the 69-year-old lieutenant governor of Texas, who said in an interview on Fox News on Monday night: "I'm not living in fear of Covid-19. What I'm living in fear of is what's happening to this country. And you know, Tucker, no one reached out to me and said, 'As a senior citizen, are you willing to take a chance on your survival, in exchange for keeping the America that all America loves for your children and grandchildren?' And if that's the exchange, I'm all in."
The issue of trade-offs and of how best to balance epidemiological and economic concerns has informed many articles in the Opinion pages of The Times, receiving more measured consideration from my colleague Tom Friedman, from two academic titans and from a public-health expert, David Katz, who recently wrote, "I am deeply concerned that the social, economic and public health consequences of this near total meltdown of normal life — schools and businesses closed, gatherings banned — will be long lasting and calamitous, possibly graver than the direct toll of the virus itself."
That perspective transcends political party. A prominent Democrat, for instance, said to me, "Will we lose more Americans to suicide than to the coronavirus?" That was days before Trump, during the town hall, said that if the country is locked down for long, "you're going to have suicides by the thousands."
This is excruciatingly tough stuff, and yet Trump is pre-empting the thorough and thoughtful deliberation that it demands — and painting himself into a corner — with pledges that the economy will roar back and that America will "be open for business very soon, a lot sooner than three or four months that somebody was suggesting — a lot sooner," as he said on Monday. If you're an enemy of "soon," you're on thin ice with him. I can hear it cracking under Anthony Fauci even as I type.
The president's obsession with the economy is an extension of his obsession with wealth. He has only two lenses through which he sees the world, two yardsticks by which he measures everyone and everything: money and celebrity. He can't pretend otherwise because he doesn't bother to try.
--
****
Juan
Freedom's just another word for nothing left to lose.
- Kris Kristofferson
Posted by 1ma2t