Of all the excuses for hiding a big lie that he promised not to mess with, using his Impeachment Trial to distract from the fact that he is now putting Medicare, Social Security, and other entitlements on the chopping block, after his huge tax cut to the rich and corporate folks, well this is Trump at his cold-hearted lying worst:
Trump opens the door to Social Security cuts 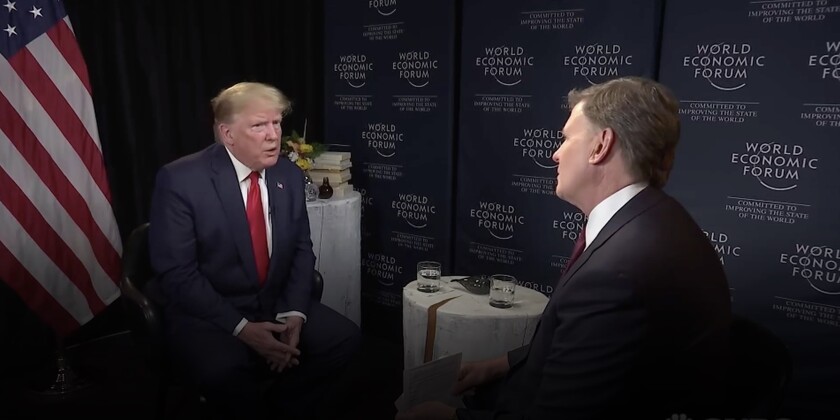 PRESIDENT TRUMP, speaking with CNBC's Joe Kernen at the World Economic Forum in Davos, Switzerland, signaled he was open to cutting back Social Security, Medicare and other social safety net programs.
MICHAEL HILTZIK
With his penchant for saying the quiet parts out loud and assuming no one is paying attention, President Trump on Wednesday opened the door to cutting Social Security and Medicare later this year.
The word came at the very end of an interview conducted by Joe Kernen of CNBC, in connection with Trump's appearance at the World Economic Forum in Davos, Switzerland. Here's how it unfolded, according to the tape and transcript from CNBC:
"KERNEN: Entitlements ever be on your plate?
"PRESIDENT TRUMP: At some point they will be. We have tremendous growth. We're going to have tremendous growth. This next year I — it'll be toward the end of the year. The growth is going to be incredible. And at the right time, we will take a look at that. You know, that's actually the easiest of all things, if you look, cause it's such a —"
Trump then wandered off into a string of false and incoherent claims about the economy. "We've never had growth like this," he said, even though economic growth during Trump's term is nowhere near a record pace.
What's important is that Trump appears to be falling into lockstep with the more general Republican position that closing the federal deficit requires cutting back on Social Security, Medicare and other social safety net programs. Never mind that the deficit was opened into a gaping maw by the tax cut Trump signed in December 2017, which went mostly to corporations and the wealthy, the effect of which goosed economic growth for a short period but has faded.
Other commentators have underscored the conflict between Trump's appearing open to tampering with Social Security and Medicare, and his promise during the last presidential campaign to leave those programs alone.
"Every Republican wants to do a big number on Social Security," he said in one appearance. "They want to do it on Medicare, they want to do it on Medicaid. And we can't do that. And it's not fair to the people that have been paying in for years."
Just before election day 2016, he claimed: "Hillary Clinton is going to destroy your Social Security and Medicare. … I am going to protect and save your Social Security and your Medicare."
Cutting benefits has been part of Republican orthodoxy for decades, but the drumbeat has gotten louder. In September, Sen. Joni Ernst (R-Iowa) talked about the need to go "behind closed doors" to reform Social Security, because it's clear that the American public won't stand for it being done in the open. A year earlier, Senate Majority Leader Mitch McConnell (R-Ky.) labeled Social Security, Medicare and Medicaid — so-called entitlements — "the real drivers of the debt" and called for them to be adjusted "to the demographics of the future."
It's worth noting that proposals to cut social insurance benefits are certain to be dead on arrival as long as Democrats control at least one chamber of Congress, as they do currently. Indeed, the Democratic Party, through its representatives in Congress and its candidates for president, has shown itself to be strongly in favor of expanding and increasing Social Security benefits, not cutting them back.
Trump still can do a lot of damage to these programs by starving their administrative budgets or tinkering with administrative rules, as he's proposed to do with Medicaid and Social Security Disability Insurance.
As I've reported before, Trump's cavalier approach to these programs isn't really a secret.
His proposed 2020 budget would have pared as much as $1.5 trillion from Medicaid, partially by repealing the Medicaid expansion enacted as part of the Affordable Care Act, and partially by converting the program to a block grant to states — a system that destroys the program's ability to match funding with costs and results in a massive shortfall over time.
Trump's budget would gut the nation's disability programs by $84 billion. At least $10 billion of that would come from Social Security disability through changes in eligibility rules. An additional $400 million would come out of the Social Security Administration's administrative budget, which is already strapped for cash, in the next year alone. Beneficiaries could expect more busy signals on the phone lines and longer waits at Social Security offices.
In October, Trump signed an executive order bristling with stealth attacks on Medicare. Buried within the order was a provision that would destroy Medicare by driving its costs to an unsustainable level. He also proposed to turn more of the program over to commercial insurers. As I wrote then, "Put simply, he's proposing to privatize Medicare."
Again, all this has been hiding in plain sight. Trump's latest remarks have gotten a lot of attention, because they appear to be so blunt. But the danger the Trump administration poses to programs that protect America's most vulnerable populations has been evident almost from the first.
Keep up to date with Michael Hiltzik. Follow @hiltzikm on Twitter, see his Facebook page or email michael.hiltzik @latimes.com.
--
****
Juan
Freedom's just another word for nothing left to lose.
- Kris Kristofferson
Posted by 1ma2t