At long last.  A news item that wipes Trump off the front page.  Well, not exactly, since the Kurds are now calling Tump an unreliable ally and a CHICKEN, as our troops make a hasty retreat.

It's only $4.99. But Costco's rotisserie chicken comes at a huge price

At the back of Costco's stores, past the televisions, jewelry, jumbo-sized ketchup jugs and tubs of mixed nuts, is one of the retailer's most prized items: The rotisserie chicken that costs just $4.99.

Cheap Kirkland Signature rotisserie chickens aren't only a quick way for families to get dinner on the table. For Costco, the chickens are a lure, pulling customers into stores and getting them to browse the aisles, adding sometimes hundreds of dollars worth of items to their shopping carts before they pick up that bird.
The chickens have become almost a cult item. 91 million were sold last year, double the number from a decade earlier. They have their own Facebook page with nearly 13,000 followers.
So Costco is willing to go to extreme lengths to keep its chickens at $4.99. For the past few years, it's been recruiting farmers for this moment: The official opening of a sprawling, $450 million poultry complex of its very own in Nebraska.
It's a highly unusual move for one of the world's largest retailers. Costco will control the production process from farm to store, making key decisions down to the grain chickens eat and the type of eggs hatched. Costco has even put its socially-conscious corporate reputation on the line, fending off local critics who have rallied against the Nebraska operation.
This is a big experiment not only for Costco, but the broader industry as well. Retailers will be watching Costco's plan closely. It's one of the largest-scale tests of a store's ability to become its own meat supplier. And there's no guarantee it will work. 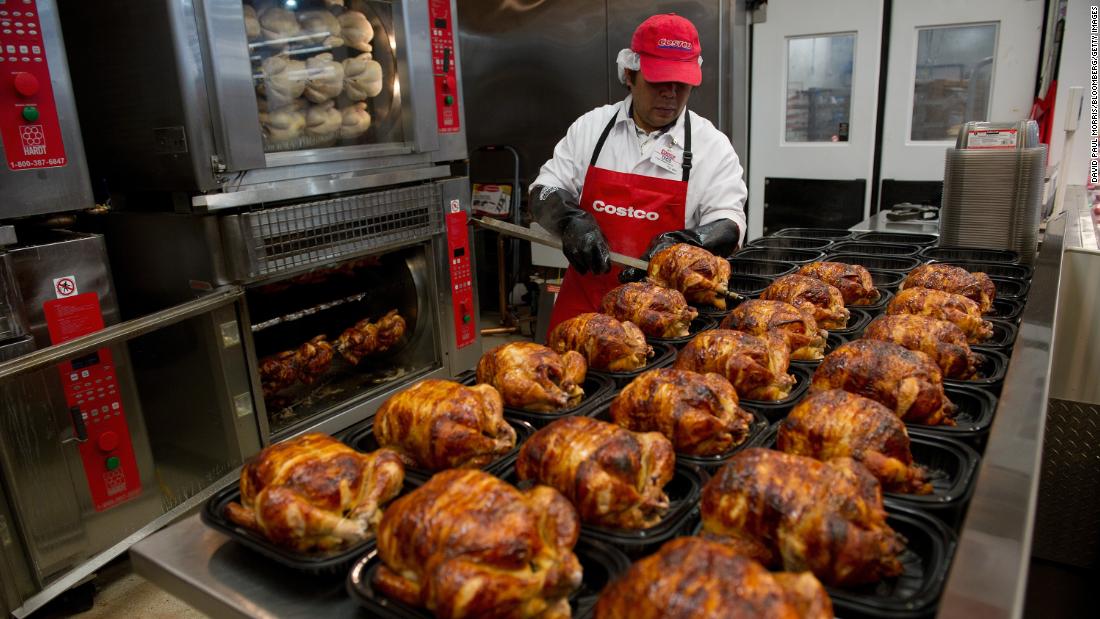 The 'inexorable rise of chicken'

Costco is so determined to keep its rotisserie chickens at $4.99 that it's been willing to lose money selling them in the past. Even as competitors increased their rotisserie chickens to $5.99 in recent years, Costco held its price steady.
"As prices changed dramatically and we saw the competition raising the price, it was a hot price," Costco's chief financial officer Richard Galanti said in 2014.
Costco was willing to sacrifice "$30 million, $40 million a year on gross margin by keeping it at $4.99," Galanti said the following year. "That is what we do for a living."
Jeff Lyons, senior vice president of fresh foods at Costco, who joined the company in 1990 as its first meat buyer, declined to say whether Costco still loses money selling them. But rotisserie chickens have been a "very, very good business and very consistent growth for a long period of time," he said. "We're right about 100 million right now."
But in recent years, it has become even more difficult for Costco to keep its rotisserie chicken prices down. Americans are eating more chicken than ever before, and the company faces supply challenges and cost pressures in the highly concentrated poultry industry.
A small number of massive producers dominate America's chicken supply: Tyson, Pilgrim's Pride, Sanderson Farms, Perdue and Koch Foods. Together, those companies control more than 60% of America's $65 billion poultry market, according to Watt Poultry, a meat industry publication.
"A more consolidated industry has more bargaining power against its customers," said Timothy Ramey, a longtime poultry industry analyst.
Costco wants to reduce its reliance on those big producers.
Traditional chicken suppliers are also producing fewer birds to be sold as rotisserie chickens.
An estimated 15% of chickens today are sold as whole birds, down from around 50% of all poultry in the 1980s, according to the Department of Agriculture. Instead, they are chopped up into breasts, legs, thighs, chicken nuggets and wings to feed Americans' insatiable appetite for chicken at grocery stores and fast-food restaurants.
"Make no mistake: Consumers want cheap Walmart chicken," said Ramey. "That explains the inexorable rise of chicken."
As the number of full-sized birds in production drops, bird weights are going up to keep up with demand. Companies like Tyson Foods can make a higher profit by cutting up and skinning heavier chickens and selling their parts.
Bird weights are expected to continue rising, presenting a problem for Costco. Costco needs birds around six pounds to cook in stores.
"We were having trouble getting the size bird we wanted on a consistent basis," said Lyons from Costco. "We couldn't take a seven-pound bird or an eight-pound bird and make it work. They're too big. They wouldn't even fit on our rotisserie line." 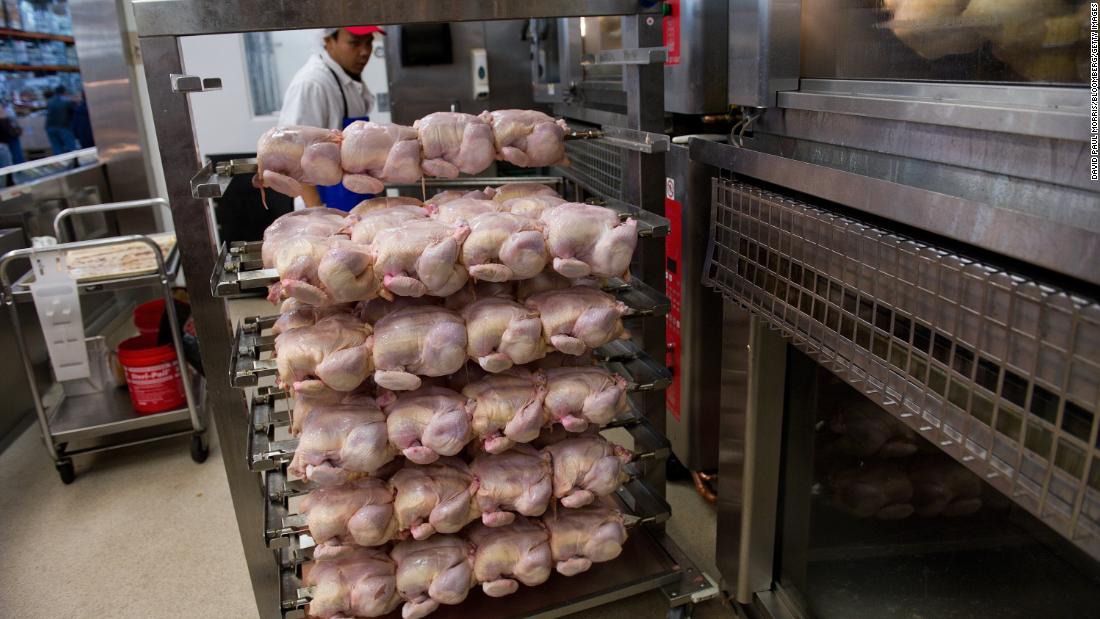 Bird sizes are growing to feed demand for chicken.

That's why Costco is seizing control of its chicken supply chain. Costco believes it can slash costs by bringing production in house, saving up to 35 cents per bird.
It has already done the same with hot dogs.
Costco sold kosher hot dogs at food courts until 2009, but suppliers started to run low on beef. So it brought production in-house and switched to its own Kirkland Signature-brand hot dogs. Costco now produces 285 million hot dogs at a plant in California.
Costco picked Nebraska for the poultry plant because the area had grain, water and labor available. Those are the three biggest costs involved with chicken production. 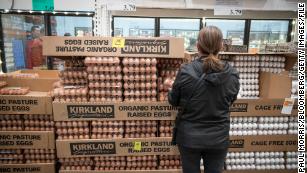 How Kirkland Signature powers Costco's success
Although Nebraska is not known for chicken production, corn prices have fallen in recent years, leading to interest from farmers looking for new opportunities. The United States' trade war with China has also taken a toll on farmers.
"We had to have farmers who were willing to grow for us, and we found overwhelming support," Walt Shafer, a veteran Pilgrim's Pride executive overseeing Costco's operations in Nebraska, said in a recent interview. "These grain farmers out here want to diversify."
The retailer is building a poultry complex in Fremont, Nebraska, a farming town near the Iowa border. The complex includes a processing facility, hatchery and feed mill.
The nearly 400,000 square-foot plant in Fremont will employ 950 workers. The plant will take 45 weeks to ramp up to full production. Once it's at full speed, the plant will process about 100 million chickens a year, or 40% of Costco's annual chicken needs. Costco will process around two million birds a week in Nebraska to supply to stores on the West Coast. 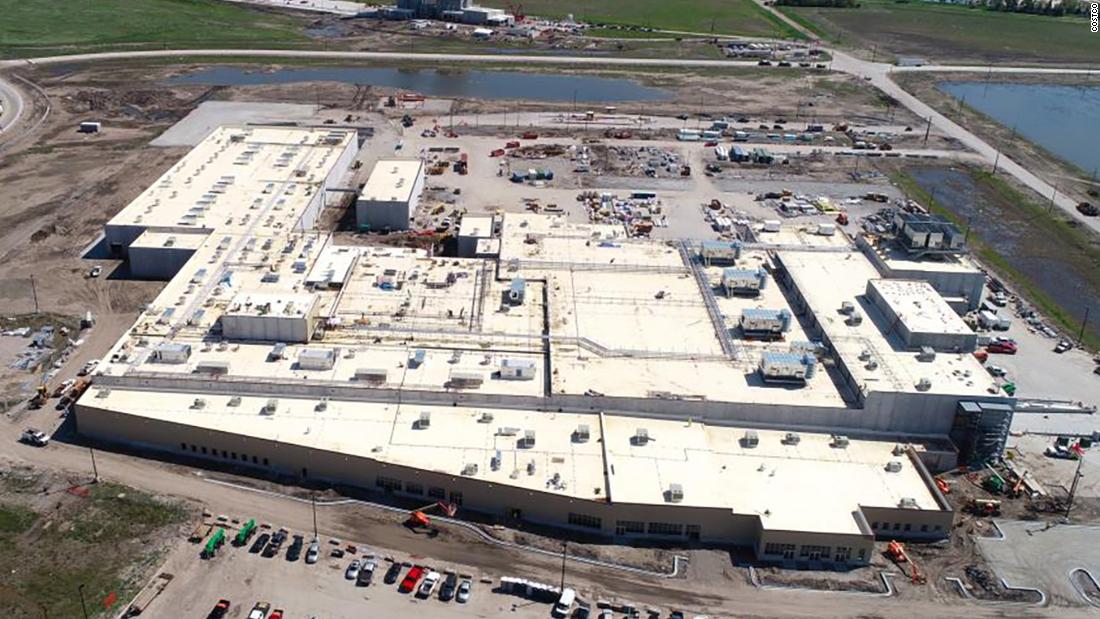 Costco's nearly 400,000 square-foot processing plant in Fremont, Nebraska will eventually process about 100 million chickens a year.
Costco is partnering with Nebraska farmers to raise breeder hens to lay eggs. Those eggs will then go into hatcheries, and the chicks will be delivered to Nebraska growers. The chicks will grow for around 42 days in hundreds of specialized barns in the area until they mature into six-pound broilers —chickens raised specifically for their meat. Then they're off to the processing plant.

If the Costco plant is successful, other major food retailers will likely make a business case for bringing animal protein needs in-house."

There are few examples of retailers vertically integrating in the agricultural industry like this, experts say. Walmart is seizing control of part of its Angus beef supply chain, and both Walmart and Kroger have integrated their milk supplies. But none are as sweeping as Costco's operations in Nebraska.
"Costco's poultry complex is more than just a multi-million dollar experiment from a retailer known for doing things differently," said Will Sawyer, an animal protein economist at CoBank, a leading agriculture lender. "If the Costco plant is successful, other major food retailers will likely make a business case for bringing animal protein needs in-house."

$4.99 broilers come at a price beyond Costco's bottom line.
Costco has billed itself as a socially responsible and worker-friendly company, even earning praise and a store visit from then-President Barack Obama for raising its minimum wage in 2014.
But by getting into the chicken business, it's wading into a controversial industry with many skeptics, including some who come from Costco's customer base. Its poultry farm ambitions have sparked backlash among environmentalists and farmers' advocates in the Fremont area.
Opponents of the plant in Fremont like Randy Ruppert, a local activist, worry about the environmental impact of the plant and poultry barns, such as water contamination from runoff, ammonia from chicken feces and other health risks. In neighboring Iowa, poultry operations have been linked to high levels of nitrates in tap water.
"They are bringing degenerative farming to Nebraska, nothing else," said Ruppert, who formed a nonprofit group, Nebraska Communities United, that has led resistance to the company. Critics packed local town halls to voice concerns and put up anti-Costco signs in the area. 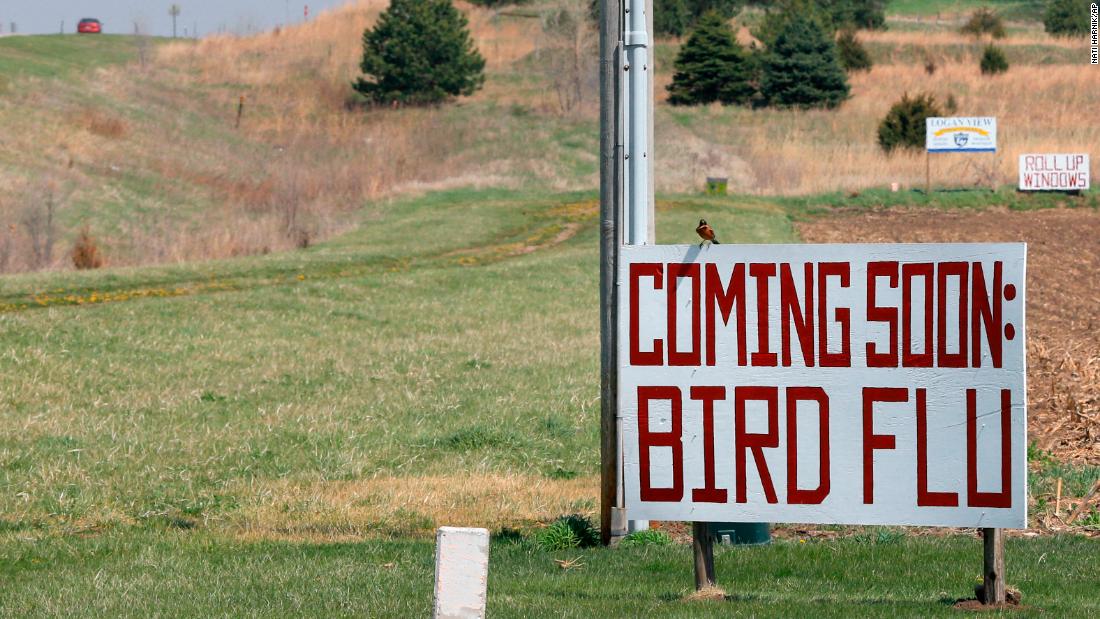 Some residents in Fremont and surrounding towns oppose Costco entering Nebraska.
The poultry industry has also come under heavy scrutiny for offering unfair contracts to chicken farmers. Around 90% of broilers in the United States are raised under contracts with farmers. Under the contract system, farmers build the barns and invest in their upkeep, while larger companies supply them with chicks and feed.
Grain farmers in Nebraska, who previously farmed corn and soybeans, are investing $350 million collectively and building barns to raise chickens. Most of the farmers had not previously grown chickens, so Costco is responsible for educating and leading the farmers.
Costco claims that it's setting a "new and improved standard" for industry contracts. "Our contract, we think, has one of the best pay rates in the industry," Shafer said in the interview.
Opponents, however, argue that Costco's 15-year contracts are a risky investment for farmers.

They are bringing degenerative farming to Nebraska — nothing else."

"We all hoped that Costco was going to present the opportunity to start to build a better system for poultry," said Lynn Hayes, an attorney at Farmers' Legal Action Group, a nonprofit group that provides legal services to farmers.
But the contracts are a "letdown," she said. "It's still far from good enough to justify the kind of investments that farmers have to put into it" because their barns can't be repurposed for other uses if their operations disappoint.
Robert Taylor, a professor emeritus of agricultural economics at Auburn University and a longtime critic of the poultry industry, blasted Costco's contracts. "This particular form of contract agriculture essentially makes the farmer an indentured servant," he said. "The farmer is basically reduced to a chicken house janitor."
Taylor argued that Costco growers' annual income for chicken farming will come out to around $60,000 after labor expenses. That's a lot less than the $90,000 to $130,000 Costco says farmers will bring home in pay. 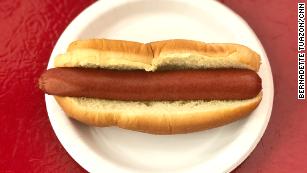 Costco's secret weapon: Food courts and $1.50 hot dogs
Costco pushed back on these charges.
Shafer, the executive leading poultry operations in Nebraska for Costco, said "we have one of the lowest risk poultry contracts available" because Costco's poultry business keep growing every year.
"I have no doubt that Costco will continue to do the right thing by our growers for the next 15 years and beyond," he said.
Despite a contentious response and the high costs of pushing into the poultry industry, Costco remains confident that the Nebraska experiment is key to its growth.
"We know that we're going to be in poultry. We see the future," said Costco's Lyons. "We're always working five to 10 years out front."
--
****
Juan
Freedom's just another word for nothing left to lose.
- Kris Kristofferson
Posted by 1ma2t