Something to Know - 12 October

This story from today's NY Times starts to assemble the tawdry characters who are involved (just like Watergate) in the Impeachment Inquiry.  You might like to add the trio of Mikey Pence, Pompous Pompeo, and Bully Barr to this mix.  Keep a list, since this will undoubtedly increase in the coming weeks and months.   Since the White House is completely stonewalling the investigation (adding Obstruction of Justice), this will slow the time needed to fully investigate, and to the WH discomfort and the GOP members of Congress, this will all spill into the activity of the General Election.   Hopefully no Gremlins this time
https://www.nytimes.com/2019/10/11/opinion/trump-giuliani-ukraine.html?nl=todaysheadlines&emc=edit_th_191012?campaign_id=2&instance_id=12938&segment_id=17825&user_id=af58c63b30a52a2ca05d6e1633e35b95&regi_id=23180491012
Opinion

All the President's Henchmen

Mr. Trump has assembled a colorful cast of characters who are having trouble keeping their stories straight. 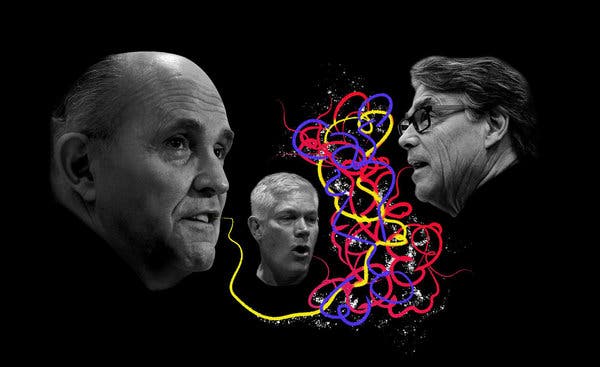 It has often been noted that President Trump holds a vision of his job more befitting a Latin American caudillo than the leader of the world's oldest democracy. His geopolitical idols trend toward the autocratic — Kim Jong-un, Rodrigo Duterte, Mohammed bin Salman, Recep Tayyip Erdogan, Vladimir Putin. He suffers delusions of grandeur, proclaiming himself "the Chosen One" and having "great and unmatched wisdom." He accuses those who challenge him of treason, and he regularly wipes his feet on the constitutional principle of checks and balances.

Witness the over-the-top letter his White House counsel, Pat Cipollone, sent House Democrats this week, the gist of which was: Your impeachment investigation is illegitimate, and we will not participate. As if this were the president's prerogative. Legal experts mostly dismissed the letter as a political stunt. Gregg Nunziata, a former counsel to Senator Marco Rubio, Republican of Florida, called it "bananas." Walter Shaub, who resigned as head of the Office of Government Ethics in 2017 over the administration's glaring lack of ethics, said that it "mistakes Trump for a king."

Fortunately, Mr. Trump's dreams of dominance tend to bump up against the hard realities of incompetence — his and that of his cronies. It has long been apparent that the president has a peculiar eye for talent. The repercussions of this were on display this week as the Ukraine scandal at the heart of the impeachment inquiry continued to unspool, spotlighting a fresh batch of colorful characters and questionable behavior.

In one of the more bizarre impeachment twists to date, two businessmen involved in the president's efforts to dig up dirt on former Vice President Joe Biden were arrested on campaign finance violation charges as they were trying to leave the country on Wednesday. Lev Parnas and Igor Fruman are Soviet-born naturalized Americans who have been working closely with Rudy Giuliani, the president's personal lawyer, to investigate Mr. Biden, one of the president's chief political rivals, and his son Hunter, who had business dealings in Ukraine. The men were also helping search for evidence to support a (debunked) conspiracy theory blaming Ukraine for the 2016 hacking of the Democratic National Committee.

Mr. Parnas and Mr. Fruman were scheduled to testify before Congress this week about their work with Mr. Giuliani. In addition to hooking up Mr. Giuliani with Ukrainian prosecutors, the pair allegedly supported an effort that proved successful to recall Marie Yovanovitch, the ambassador to Ukraine, who they claimed was bad-mouthing Mr. Trump.

Looking to influence American officials, the men arranged for large donations to, among other political causes, the 2018 campaign of Representative Pete Sessions, the Texas Republican who lost his seat last year and is now pondering a comeback. The pair reportedly pressed Mr. Sessions to help remove Ms. Yovanovitch. In May of last year, Mr. Sessions sent a letter to Secretary of State Mike Pompeo calling for the ambassador's dismissal. (Mr. Sessions has denied being influenced by the men.) Mr. Trump recalled Ms. Yovanovitch this spring, several months before her assignment was scheduled to end, without explanation.

According to the federal indictment unsealed on Thursday, Mr. Parnas and Mr. Fruman "conspired to circumvent the federal laws against foreign influence by engaging in a scheme to funnel foreign money to candidates for federal and state office so that the defendants could buy potential influence." They were arrested at Washington's Dulles International Airport Wednesday evening, about to board an international flight with one-way tickets. Earlier that day, the men were seen having lunch with Mr. Giuliani at the Trump International Hotel near the White House. The full nature of Mr. Giuliani's relationship with Mr. Parnas and Mr. Fruman is unclear. Among other connections, Mr. Parnas helped found an aptly named firm, Fraud Guarantee. On Thursday, Mr. Giuliani confirmed to The Times that he was retained by the firm last year to provide legal and business advice — but then he backtracked and said maybe it wasn't Fraud Guarantee he worked for after all.

These were not the only associates/clients of Mr. Giuliani to make news this week. Multiple reports also surfaced about Mr. Giuliani's efforts in 2017 to have top officials, including then-Secretary of State Rex Tillerson, intervene to have the Justice Department drop its criminal case against — or possibly arrange a prisoner swap for — an Iranian-Turkish gold trader represented by Mr. Giuliani. Mr. Tillerson balked.

Mr. Trump was coy Friday evening about whether Mr. Giuliani still represents him. "I don't know," he told reporters. "I haven't spoken to Rudy."

Not that Mr. Giuliani was the only impeachment player making waves. Looking to shore up its defense team, the White House has recruited Trey Gowdy, the former Republican congressman from South Carolina who ran a committee that investigated the Benghazi terrorist attack of 2012. This news displeased some members of Mr. Trump's existing legal team. Victoria Toensing, a Washington lawyer unofficially assisting Mr. Giuliani on various presidential projects, suggested the Trump team thinks of Mr. Gowdy as "a joke."

Michael Pillsbury, one of Mr. Trump's advisers on China policy, was also having trouble staying on message. On Wednesday, Mr. Pillsbury told The Financial Times that he got "quite a bit of background on Hunter Biden from the Chinese" during a trip to Beijing last month — information of fresh relevance in light of Mr. Trump's public call last week for China to investigate the Bidens. Just hours after his remarks were reported, Mr. Pillsbury showed up on C-Span, not only denying his quote but insisting that he had not spoken to The Financial Times in a month. The FT then published its email exchange with Mr. Pillsbury containing the exact quote.

Then there's poor Rick Perry. The energy secretary received a congressional subpoena regarding Ukraine. It seems his work there on energy issues somehow got tangled up with Mr. Parnas's and Mr. Fruman's efforts to install some of their allies atop the state-run energy giant Naftogaz. Also, Mr. Trump has said that his now infamous July 25 phone call with the Ukrainian president, Volodymyr Zelensky, was at Mr. Perry's behest. Mr. Perry acknowledges that he repeatedly asked Mr. Trump to hold a call with Mr. Zelensky, but only to discuss energy issues.

By week's end, the impeachment drama had taken on the feel of a telenovela crossed with a mob movie wrapped up in a true crime procedural and decorated with psychedelic TikTok clips. In a word: bananas.

But with a cast of bumblers, grifters and self-promoters like those Mr. Trump seems to favor, one should expect nothing less.