Something to Know - 27 August

The inclusion of this story in this morning's NY Times is reflective of Jingoism of past United States of America foreign policy.  No matter that China or Russia would like to suck the natural resources out of Greenland and grab the strategic location of military power, who are we in today's world to say, "hey, we want to buy part of your house, and and its stuff".   The only difference between power and land grabs by us and others is that we are not sending military force to accompany our grab.   Greenland is "owned" by Denmark.  Without getting into issues of the residents and culture of Greenland, what does Tom Cotton and the rest of what is left of Trump's mind set in taking of a land mass of real estate and people several thousand miles away?  This whole idea is the personification of the Ugly American.   There is a diplomatic way that involves NATO, the European Union, and the United Nations to even begin a discussion.   You just don't go in through the door and yell it out.
https://www.nytimes.com/2019/08/26/opinion/politics/greenland-trump.html?nl=todaysheadlines&emc=edit_th_190827?campaign_id=2&instance_id=11843&segment_id=16505&user_id=af58c63b30a52a2ca05d6e1633e35b95&regi_id=23180490827
Opinion

Tom Cotton: We Should Buy Greenland

Trump isn't the only one to recognize the country's strategic importance. Beijing does, too.

Mr. Cotton, a Republican, is a United States senator from Arkansas. 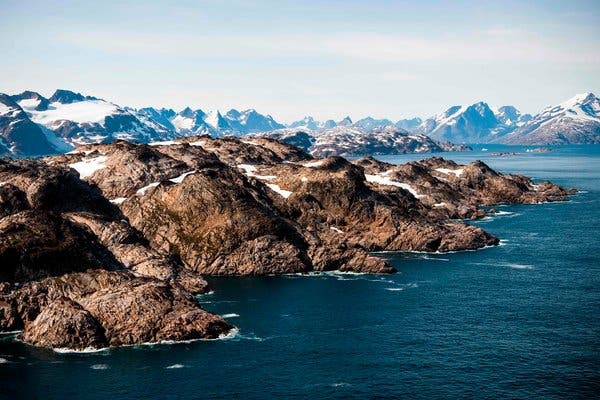 After news leaked last week that President Trump had expressed interest in acquiring Greenland from Denmark, his critics predictably derided him as crazy. But once again, the president is crazy like a fox. The acquisition of Greenland would secure vital strategic interests for the United States, economically benefit both us and Greenlanders, and would be in keeping with American — and Danish — diplomatic traditions.

Strategically positioned in the Arctic Circle, Greenland has long attracted the attention of American policymakers. As far back as 1867, Secretary of State William Seward explored the acquisition of Greenland around the time that he negotiated the purchase of Alaska from the Russians. I myself raised the prospect of acquiring Greenland with the Danish ambassador just last year.

In 1946, the Truman administration offered $100 million to Denmark to acquire Greenland, arguing that the island was "indispensable to the safety of the United States" in confronting the growing Soviet threat, just as it had been in World War II when American forces used bases in Greenland to deter Nazi aggression. While the deal didn't go through, we kept troops on the island throughout the Cold War. Today, the Air Force's 21st Space Wing is stationed at Thule Air Base in western Greenland to support our ballistic-missile defenses and space missions.

America is not the only nation to recognize Greenland's strategic significance. Intent on securing a foothold in the Arctic and North America, China attempted in 2016 to purchase an old American naval base in Greenland, a move the Danish government prevented. Two years later, China was back at it, attempting to build three airports on the island, which failed only after intense lobbying of the Danes by the Trump administration.

Beijing understands not only Greenland's geographic importance but also its economic potential. Greenland is rich in a wide array of mineral deposits, including rare-earth minerals — resources critical to our high-tech and defense industries. China currently dominates the market in these minerals and has threatened to withhold them from us to gain leverage in trade negotiations. Greenland also possesses untold reserves of oil and natural gas.

An agreement to transfer Greenland's sovereignty must also serve the interests of our good friends, the Danes, and the 56,000 Greenlanders as well. Their considerations ought to include the fact that despite Greenland's long-term potential, a lack of infrastructure and financing still hamstring the island's economy today. Greenland's economy is less than one-tenth of Vermont's, America's smallest state economy. Every year, Denmark transfers $670 million in subsidies to support the island.

As the world's largest economy, the United States could more easily assume support for Greenland's communities while investing substantially in its future. The transfer of Greenland's sovereignty would alleviate a significant financial burden on the Danish people while expanding opportunities for Greenlanders. Just look at what American sovereignty has meant to Alaskans compared with conditions in Siberia under Russian control.

Despite the historical ignorance of the president's critics, the negotiated acquisition of sovereignty is a longstanding and perfectly legitimate tool of statecraft, particularly in the American tradition. More than one-third of America's territory was purchased from Spain (Florida), France (the Louisiana Purchase), Mexico (the Gadsden Purchase) and Russia (Alaska).

Indeed, Washington and Copenhagen have engaged in exactly this kind of transaction. In 1917, President Woodrow Wilson — the great champion of self-determination — paid $25 million to purchase the Danish West Indies, which have ever since been known as the U.S. Virgin Islands.

Who today believes the acquisition of Alaska was "Seward's folly"? On the contrary, it has been a great blessing to Alaskans and all Americans. Our nation has much to gain, as do the Danes and Greenlanders. While there are short-term obstacles, the same benefits could apply for Greenland today — and the manifest logic of this idea means that its consideration is here to stay.

Tom Cotton (@sentomcotton) is a Republican senator from Arkansas.