Something to Know - 28 January 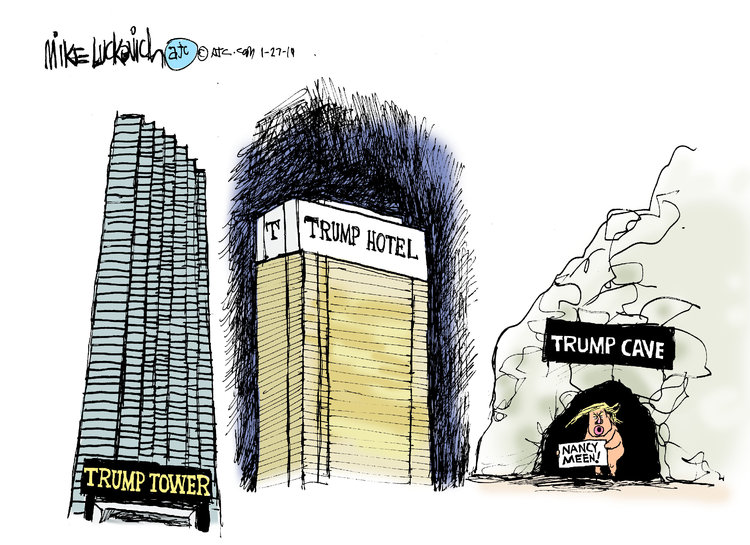 Let's try this raw cut-and-paste from today's WaPost.   Individual 1 appears to turn on his right flank.  He is really boxing himself in.  This does not portend a pretty end to his messes.  (just keep scrolling down)
https://www.washingtonpost.com/nation/2019/01/28/maybe-i-didnt-return-her-phone-call-trump-ridicules-ann-coulter-slams-fox-news-fallout-over-wall/?utm_term=.1355362fe8b7&wpisrc=nl_politics&wpmm=1 President Trump on Sunday responded to criticism from Ann Coulter, a right-wing provocateur, suggesting that she was resentful because he wasn't returning her phone calls. (Rich Polk/Getty Images/Politicon)
By Isaac Stanley-Becker
January 28 at 5:31 AM

Macbeth suffered from hubris. Hamlet from self-doubt. The fatal flaw that some conservative pundits fear could lead President Trump, otherwise their macho hero, to his downfall is his failure to keep his promise to build the wall. But is this winter's tale about the southern border a tragedy or a farce? "The course of true love never did run smooth," observes a thwarted lover in "A Midsummer Night's Dream."

The love affair binding Trump to right-wing media and the conservative commentariat entered its roughest patch yet over the weekend, following attacks within his own ranks over his capitulation to Democratic demands that he reopen the government without $5.7 billion for his shape-shifting barrier along the U.S.-Mexico border.

In a Wall Street Journal interview published Sunday, Trump hit back at Ann Coulter, a conservative author whose threats about the defection of the president's base were credited with pushing him to his once-uncompromising stance. When he backed down on Friday, she called him a "wimp."

"I hear she's become very hostile," Trump told the Journal. "Maybe I didn't return her phone call or something."

Also on Sunday, he attacked two top reporters for Fox News Channel , his news channel of choice, saying on Twitter that they had displayed "even less understanding of the Wall negotiations than the folks at FAKE NEWS CNN & NBC!"

Together, the swipes represent one more piece of evidence that the dawn of divided government has put Trump in a dangerous and defensive political position, compounded by the indictment Friday of his longtime associate Roger Stone. They show just how much he depends on positive punditry and other forms of approval. And they telegraph his sensitivity to criticism, particularly from people he has identified as friends, loyal to his often-dubious claims.

A lasting fissure could have untold consequences for his presidency, which relies on right-wing media for policy ideas as well as for the rosy picture of his White House that it paints for its audience. Across the political spectrum, though not without some predictable dissenters, he was judged the loser of the high-wire maneuvering over the shutdown, bested by House Speaker Nancy Pelosi (D-Calif.). Meanwhile, his approval rating took a dive, down to 37 percent in a Washington Post-ABC poll released Friday.

Lawmakers have three weeks to make a deal on border security

Members of Congress spoke on Jan. 27 about the need to reach an agreement on immigration and border security before funding lapses for some federal agencies. (Patrick Martin /The Washington Post)

Still, the president has struck a defiant tone, maintaining that the deal — which reflected Democratic objectives — "was in no way a concession" and vowing repeatedly to build the wall. "21 days goes very quickly," he wrote on Saturday, referring to the three-week period in which the federal government will remain open amid negotiations about a wall. He concluded, "We will build the Wall!"

His posture appeared to recoup his standing with certain powerful right-wing platforms. The Daily Caller, which at first had run the ominous headline, "TRUMP CAVES," by Sunday was promoting the president's criticism of Fox News. So was Mike Cernovich, a far-right social media personality who had derided the president as the "Commander-in-Soy" and called Pelosi "alpha." The Drudge Report had replaced its dire warning, "NO WALL FUNDS," with a piece by Michael Goodwin, a New York Post columnist and Fox News contributor, judging, "President Trump is down, but not out."

Others remained by his side through the fallout. "Anyone out there thinking President Trump caved today, you don't know the Donald Trump I know," Fox News host Sean Hannity told his viewers on Friday night.

The revolving door between Fox News and the Trump administration

But in refusing to make excuses for the president, Coulter has cast herself as the truest prophet of his agenda. She has used her following with his base — rooted in her early support of his candidacy, as well as her defense of the causes that helped power his rise — to try to hold him to his campaign promises.

"There's nothing Trump can do that won't be forgiven," she wrote in her 2016 book "In Trump We Trust: E Pluribus Awesome!" She added forebodingly: "Except change his immigration policies."

Coulter has referred to Trump as her "emperor god." Now she calls herself a "former Trumper." Her frustration with the president has simmered over the past two years, at one point driving her to ask, "who DOESN'T want Trump impeached?" It boiled over on Friday.

Good news for George Herbert Walker Bush: As of today, he is no longer the biggest wimp ever to serve as President of the United States.

40.1K people are talking about this

Speaking with HBO host Bill Maher, she claimed to be channeling a rebellion in Trump's base over his inability to build a border wall. His failure to get Mexico to pay for the structure is scarcely mentioned anymore.

"The base is what has rebelled here," she said. "And they can take me as a stand-in for the base, but that's all I am — a member of the base."

When pressed about her about-face — asked what her "first clue" was that Trump was "a lying con man," as Maher put it — Coulter quipped: "Okay, I'm a very stupid girl, fine."

Trump, who shares Coulter's penchant for online provocation, responded to her harsh assessment of his record by mocking her as a needy for his attention, incensed that he hadn't called her back.

And he takes criticism well!

The war isn't over yet. Remember Donald Trump is a man willing to take the shots to change the norm in order to do what he thinks is best for the country. Very often, he's dead on…Never underestimate this President. He lives to fight another day. #OpeningStatement 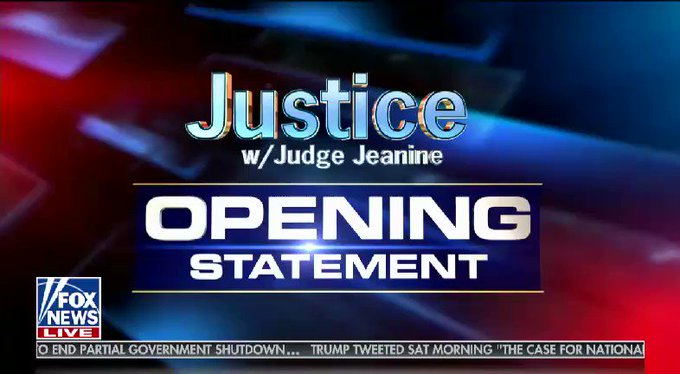 1,088 people are talking about this

The rejoinder speaks to the direct line that certain right-wing media figures enjoy with the president. According to New York Magazine, Hannity talks with Trump on the phone most weeknights.

His comeback against Coulter is also of a piece with his frequent dismissal of female critics as desperate. In December 2017, after Trump accused Sen. Kirsten Gillibrand (D-N.Y.), who vying to challenge him for president, of "begging" him for campaign contributions, saying she "would do anything for them," Sen. Elizabeth Warren (D-Mass.), also a presidential contender, blasted the president for "trying to bully, intimidate and slut-shame" her colleague. Earlier the same year, Trump lashed out at the hosts of MSNBC's "Morning Joe," writing that Joe Scarborough and Mika Brzezinski had "insisted" on joining him for New Year's Eve at Mar-a-Lago, his club in Palm Beach, Fla., and that Brzezinski had been "bleeding badly from a facelift."

The president didn't employ such caustic language in his complaint about Fox News, lobbed on Twitter on Sunday evening.

Never thought I'd say this but I think @johnrobertsFox and @GillianHTurner @FoxNews have even less understanding of the Wall negotiations than the folks at FAKE NEWS CNN & NBC! Look to final results! Don't know how my poll numbers are so good, especially up 19% with Hispanics?

34.3K people are talking about this

He didn't make clear how exactly John Roberts, the network's chief White House correspondent, and Gillian Turner, a Washington correspondent, had disappointed him, like errant children in Shakespeare's "King Lear." But the two had appeared earlier Sunday for a panel on Fox News, in which they bluntly assessed the costs of the shutdown, not just for the president's political standing but for the national defense.

"One of the losers I wanted to mention that people are not spending enough time on this week is U.S. cybersecurity defenses," Turner said. One federal source had told her, she said, that the government was more vulnerable to cyber penetration and online terrorism in the week before the shutdown ended "than at any point in history."

President Trump on Jan. 25 announced a deal to end the partial government shutdown, reopening the government until Feb. 15. (The Washington Post)

Roberts agreed, recalling, "I think a mutual friend of ours was saying if you were going to attack the United States, if you were a terrorist during the shutdown, now would be the time."

Neither reporter answered the president's complaint directly, but Turner did thank a grateful fan in a tweet later Sunday night.