Something to Know - 12 November 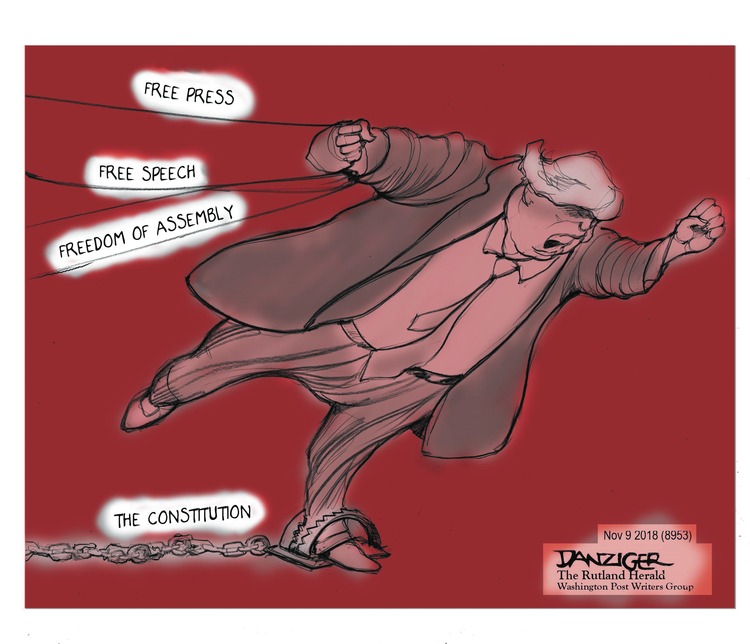 Our president performed in such a disgusting manner at a ceremony in Paris that embarrassed all of us, and made us appear that we never learned from the fascism that overtook the world at the end of World War 1 and took us to another war several years later.  He has no sense of history.  He figuratively spat in the faces of all of our veterans who fought and were killed in both wars.  Check out the story below, if you have not read it already, or if you need to re-visit the dangerous path that "our" president has put us in.
https://www.nytimes.com/2018/11/11/us/politics/macron-trump-paris-wwi.html?emc=edit_th_181112&nl=todaysheadlines&nlid=23180491112

PARIS — Dozens of leaders from around the globe marched in the soaking rain down the Champs-Élysées on Sunday, expressing solidarity for an international order that had its origins in the end of a world war 100 years ago, an order now under increasing pressure on both sides of the Atlantic.

Only after these leaders arrived by foot at the Arc de Triomphe did President Trump show up, protected from the rain as he made an individual entrance. A few minutes later, President Vladimir V. Putin of Russia did the same.

For Mr. Trump, at least, the separate arrival was attributed to security concerns. But somehow it felt apt that these two leaders would not arrive with the crowd.

No one has done more to break up the postwar global system in the last couple of years than Mr. Trump and Mr. Putin. As the anniversary of the armistice that ended World War I was commemorated on Sunday, Mr. Trump's brand of "America First" nationalism was rebuked from the podium while he sat stone-faced and unmoved, alienated from some of America's strongest allies, including his French hosts.

But while he may have been out of step with many of the leaders gathered around him, Mr. Trump remains at the vanguard of forces that are redefining the Western political paradigm in countries like Poland, Hungary, Italy and Turkey. In Britain and Germany, two of the Continent's major powers, nationalist movements have upended the establishment.

So a ceremony meant to celebrate the ties that bind the world today in effect showcased the divisions that are pulling it apart.

"Patriotism is the exact opposite of nationalism," President Emmanuel Macron of France said in a speech at the Arc de Triomphe, welcoming the leaders and extolling an old system now under siege. "Nationalism is a betrayal of patriotism by saying: 'Our interest first. Who cares about the others?'"

Recalling the forces that led to World War I, Mr. Macron warned that "the old demons" have been resurfacing and declared that "giving into the fascination for withdrawal, isolationism, violence and domination would be a grave error that future generations would very rightly make us responsible for."

Mr. Trump, who recently declared himself "a nationalist," appeared grim as he listened to the speech through an earpiece and clapped only tepidly afterward. He had no speaking role and made no mention of the issues Mr. Macron raised during an address later at a cemetery for American soldiers killed in the war.

The ceremony led by Mr. Macron encapsulated the tension in the international arena as Mr. Trump seeks to rewrite the rules that have governed the world in recent decades. He has abandoned international agreements on trade, nuclear proliferation and climate change, and disparaged alliances like NATO and the European Union.

Mr. Macron has now, in effect, given a rebuttal. In addition to the speech, he also used an interview with Fareed Zakaria of CNN that aired Sunday to define himself as "a patriot" rather than a "nationalist."

Despite the friction with Mr. Macron, Mr. Trump's views have been embraced by other Western leaders, some of whom, like Viktor Orban in Hungary, have made an anti-immigrant stance the keystone of their policy.

"He's not isolated," said Bruce Jentleson, a scholar at Duke University, citing nationalist politicians across Europe. "They've all benefited from him as precedent." Other leaders have even adopted and adapted Trump phrases like "fake news" and "America First" for their countries.

But, Mr. Jentleson said, it "mostly gives him second-tier players like Poland, Hungary, Italy, and not the big guys like Germany and France."

And even some of those nationalists do not favor unraveling the world order entirely so much as changing the rules, as with President Xi Jinping of China or the Europeans who want better arrangements within the European Union, not a departure from it.

Daniel Fried, a former assistant secretary of state for Europe, said Mr. Trump's nationalism did not reflect a consensus even within his own administration, which still has senior officials with a more traditional internationalist outlook.

"The danger to the world is not that Trump will lead the nationalists, sweeping them to remake the world in an ugly, pre-1914 image or a dystopian counter-world of the U.S. siding with the fascists in World War II," he said. "The danger is that Trump may take the U.S. out of the game — à la the interwar period — long enough for one of the serious nationalists, Putin or Xi, to do major damage."

Aside from the discord with the French president, Mr. Trump's two-day visit to Paris was marred by his decision on Saturday to scrap a planned visit to the Aisne-Marne American Cemetery at the foot of the hill where the Battle of Belleau Wood was fought. Aides cited the rain in canceling a helicopter flight, but it went over badly in Europe.

Mr. Trump had another chance to pay respects to the war dead on Sunday at the Suresnes American Cemetery outside Paris, where 1,565 American soldiers are buried. Speaking in a drenching rain, Mr. Trump paid tribute to the soldiers and praised Franco-American relations, largely sticking to his prepared text without responding to Mr. Macron.

"The American and French patriots of World War I embodied the timeless virtues of our two republics — honor and courage, strength and valor, love and loyalty, grace and glory," he said after visiting a field of white crosses. "It is our duty to preserve the civilization they defended and to protect the peace they so nobly gave their lives to secure one century ago."

In contrast to the stiff interactions with the American president, Mr. Macron and Chancellor Angela Merkel of Germany, representing two nations that were once bitter enemies, demonstrated the close friendship that has emerged from the rubble of war. In appearances over the weekend, the French and German leaders — who are facing their own political struggles at home — appeared affectionate, and Mr. Macron on Saturday posted a picture of the two holding hands along with the single word "Unis," or "United."

Mr. Putin, on the other hand, seemed focused on Mr. Trump, approaching him at the Arc de Triomphe, shaking his hand and giving a friendly pat on the arm. The two later chatted briefly at a lunch for all the visiting leaders, according to the Kremlin, but will wait for a formal meeting until later this month, when both will be in Buenos Aires for a Group of 20 summit meeting.

In marking the centennial of the armistice, Mr. Macron said that from the ashes of that war and the next one came hope. "This hope is called the European Union, a union freely entered into, never before seen in history, a union that has freed us of our civil wars," he said.

Yet absent from the ceremony was the prime minister of Britain, which is currently in the throes of trying to detach itself from the European Union. Prime Minister Theresa May attended her own country's commemorations on Sunday, although she made a point of visiting France and Belgium on Friday to lay wreaths at the graves of soldiers killed in the war.

Among the leaders present on Sunday were Prime Minister Justin Trudeau of Canada, King Felipe VI of Spain, Prime Minister Benjamin Netanyahu of Israel, President Recep Tayyip Erdogan of Turkey, President Petro O. Poroshenko of Ukraine and dozens of others.

The ceremony, in some measure Franco-centric by dint of being held in Paris, made a palpable effort to reach out to other countries that lost hundreds of thousands of people.

While the Marseillaise, the French national anthem, opened the ceremony, the most moving moments came when high school students in yellow scarves read century-old letters from eight men and women who either fought or lived through World War I, sticking to the language in which they were written, including English, French and German.

After the ceremony and subsequent lunch, Mr. Macron opened the Paris Peace Forum, a three-day conference to discuss fostering multilateralism. "History will retain an image — that of 84 chiefs of state and of governments united," he declared.

"What is uncertain for the future is how this image will be interpreted," he continued. "Will it be a ringing symbol of a durable peace among nations or the photograph of the last moment of unity before the world goes down in new disorder?"

Mr. Trump was not there to help answer that question. He skipped the forum and headed back to the United States.