Something to Know - 8 September 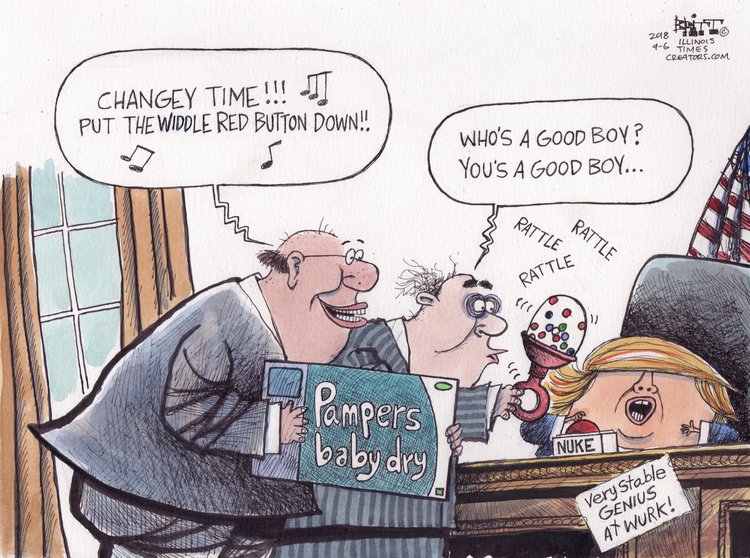 The news is that the trend is that Kavanaugh will most-likely be placed on SCOTUS.  Trump won't last, and things will change.  However, the right-wing will have reached its goal of having a decided anti-left fraternity on the court.   Notice, I did not say Conservative, but a politically stagnant stump and obstacle.  And it will remain there for decades.  No matter how progressive our direction with respect to the executive and legislative branches go, we will still live in a house infected with the smell.   It will be like living in a nice neat home built on top of a creaky crawl space.   Once the skunks get in to living below  you, no matter what you do, the skunks will always be there.  Even if we elect good progressives from here on out, we will always have to live with the stink of the organic sewage left in place by the previous pigs.   Today's Republican Party gives pigs a bad name.
Opinion

While Honest Abe rolls in his grave …

You've probably heard that Donald Trump has been comparing himself to Abraham Lincoln.

"You know when Abraham Lincoln made the Gettysburg Address speech, the great speech, you know he was ridiculed?" Trump told a rally in Montana on Thursday. "Fifty years after his death they said it may have been the greatest speech ever made in America. I have a feeling that's going to happen with us. In different ways, that's going to happen with us."

Well, we can all rally around the "different ways."

The president has certainly been having an, um, tough week. He's reeling from the combination of Bob Woodward's new book and the Times Op-Edin which an anonymous senior official assured the country that the people behind the scenes are working very, very hard to make sure Trump isn't actually running the country — which would of course be disastrous.

On Friday, Trump said he thought the attorney general should ferret out the author, as a matter of "national security." People, how do you think Jeff Sessions responded when he heard that? Perhaps with a bitter laugh, recalling that the Woodward book has Trump calling his attorney general "retarded"?

Trump denied he ever talked that way. But enterprising reporters quickly pulled out instances when he did. They came from recordings of the Howard Stern radio show. Trump was a regular guest there in his pre-political incarnation. Who could ever forget the time he bragged that he could have had sex with Princess Di — but only if she took an H.I.V. test beforehand? ("We wanna give you a little checkup.")

Nononono. If we start going back over all the things we knew before Donald Trump was elected president, we will all fall into a deep depression. Pick yourself up. It's almost autumn, and remember, Donald Trump is having a worse week than you are.

About the anonymous official's Op-Ed: Trump has of course been trying to prove it's all terribly wrong. For instance, the author had bemoaned the fact that "in public and in private," the president "shows a preference for autocrats and dictators" like Vladimir Putin and Kim Jong-un.

Trump responded with a tweet. What do you think he said?

A) "Nobody loves democracy more than Donald!"

B) "Kim Jong Un of North Korea proclaims 'unwavering faith in President Trump.' Thank you to Chairman Kim. We will get it done together!"

Yeah, yeah. You show you're not cuddling up to dictators by thanking a dictator for his support. But then we moved on to Stage 2, when he went off to Montana to prove that he hasn't "lost it." And gave that Lincolnesque speech. "Our ancestors built the railroads, linked the highways," Trump somberly told his audience. "And they proudly planted an American flag on the face of the moon, which is not shown in that movie."

Hmmm. Willing to let pass the idea that it was our ancestors who went to the moon. But where did the movie come from? Trump had lurched into a mini-tangent about the fact that "First Man," a soon-to-be-released film about the astronaut Neil Armstrong, does not include a scene showing the flag being put on the moon.

You'll recall that the unnamed official of Op-Ed fame complained that meetings with the president constantly "veer off topic and off the rails." Just listening to the Montana speech, you could hear it happening. The man cannot keep one thought in his mind for more than two seconds. Try to imagine Abraham Lincoln telling the folks at Gettysburg "that this nation, under God, shall have a new birth of freedom and … you know they really need to install a telegraph system in the White House."

Trump was supposed to be in Montana to stump for the Republican running against Senator Jon Tester, who earned the special enmity of the president when he opposed the nomination of Dr. Ronny Jackson to become head of the Department of Veterans Affairs. "One of the saddest things I've ever seen is when Jon Tester and what he did to a great, great man …" our president told the crowd. Jackson, he added somberly, was "actually the doctor that gave me my physical. And he said that I'm in great shape."

The president was certainly bitter, complaining about the "lies" that had been told about Jackson until suddenly, out of nowhere, he demanded: "Do we love Sean Hannity by the way? Right?"

And then a complaint about how Hannity allowed "all these losers" on Fox who say "Donald Trump, he's lost it up here."

What do you think would happen, people, if an actual business had a C.E.O. this out of whack? Well we sort of know, since we've had an opportunity lately to watch Elon Musk. Making a disastrous attempt to take his car company, Tesla, private. Then giving an interview in which he cried, told reporters he'd been working up to 120 hours a week and had a special relationship with Ambien. Then doing a nearly three-hour live podcast interview during which he drank whisky, smoked a little weed and confided, "It's hard to run companies, especially car companies."

Who do you think is worse, Elon Musk or Donald Trump? Well, Trump doesn't drink or do drugs. On the other hand, Elon Musk does not have access to nuclear weapons.

ps - if the final print is all messy,