Something to Know - 15 September

Yesterday was a big moment in the Mueller project to get to the truth,   Paul Manafort pled guilty to the charges that were hung by the previous jury trial.  Manafort gave up a lot, including close to $22 million in property that goes directly to the government (almost enough to cover the costs of the expenses of the Special Counsel to date).  He still goes to jail, AND he will cooperate with investigators in providing information related to his associations with Trump, the Trump Corporation, and sleazy business and political connections with the Ukraine and Russia.   His association with Trump, as his campaign manager, have gone from the early days of of the investigation from "....he worked for me only briefly and I hardly knew him"......to "...he's really a great guy, and I feel sorry for him" to more glowing words of praise as Manafort got into deeper depths of the swamp.  Trump seemed to be holding out the carrot of a pardon if only Manafort would keep his mouth shut.    So, where is this all going now?   We can speculate, but let's just wait to see what hot air comes spewing out of the pie hole of the bloated tangerine.  His lawyers may be putting him in a strait-jacket to keep him quiet, but let's just have Donald be Donald.

The Secret to Cracking Trump's Base

New polls show that some of the most hard-core Trumpsters are starting to get a clue. It might be because he finally crossed a line: He's now insulting them. 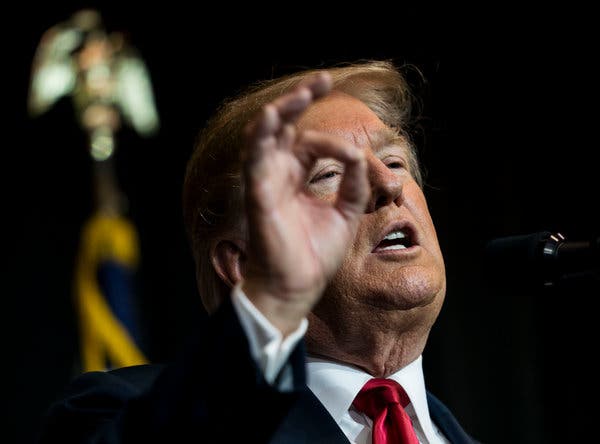 We know that Donald Trump, the first president without a pet since James K. Polk, appears to hate dogs. And the feeling is mutual, according to one of his ex-wives. He also uses pooches as pejoratives when insulting women.

Dogs, though known for their loyalty, can take only so much from one abusive human. Alas, the same cannot be said for the aging, white, rural and southern people who make up Trump's base. He can lie to them, hurt them with tariffs, make a mockery of their values, suck up to freedom-hating dictators they once distrusted, and they'll stick with him. Cult 45 is thought to be impermeable.

But surprise — a raft of new polls show that some of the most hard-core Trumpsters are starting to get a clue. I know, hold your applause. It's like discovering that climate change is not a hoax when your town is under water, and all your commander in chief can do is throw you a roll of paper towels. And the woke among the true believers is small.

The decline could be because Trump's increasingly moonstruck tweets have lost their power. Or maybe it's because all of the people around him believe he's an idiot and they're going public with the consensus inside the White House (another reason to get a dog). But I think Trump's base is showing some erosion because his followers feel he finally crossed a line: He's now insulting them.

It didn't go over well in Alabama that Trump reportedly called his 'Bama-bred attorney general, Jeff Sessions, "a dumb Southerner" and ridiculed his accent. Trump has denied the account from Bob Woodward's new book, "Fear."

Abraham Lincoln said, "No man has a good enough memory to be a successful liar," and Trump clearly doesn't have the bandwidth for the magnitude of his mendacity. I'll take the word of Woodward, White House stenographer for at least six presidents, over Trump — who just passed the 5,000 mark for false or misleading statements during his presidency.

Trump has used the regional dis before, calling the family of another ex-wife, Marla Maples, "dumb Southerners" and "hillbillies," as one reporter recalled. Last week, the longtime Trump confidant Roger Stone trashed Sessions as an "insubordinate hillbilly" — expressing a double dose of hick hatred.

It's in Trump's character to deride those without gold-plated bathroom fixtures as inferior. His people, as he said in a North Dakota non sequitur, have the best apartments and the nicest boats. But you don't need what comes out of his mouth as proof of his class disdain. Look at the two biggest policy initiatives of his presidency.

He has tried mightily to destroy Obamacare and all the lives dependent on it. He's still pushing a repeal plan that would leave upward of 18 million people without health care. And who are those people? His supporters, mostly.

Working-class whites, particularly in the old Rust Belt, were the main beneficiaries of the expansion of health care under President Barack Obama. In Midwestern states that flipped from Obama to Trump, far more non-college-educated whites gained health coverage than did whites with degrees or members of ethnic minorities, according to an Urban Institute study. And if the president's party succeeds in choking the last life out of Obamacare, these Trump voters stand to lose the most.

As noted, some of them are catching on. A Quinnipiac poll out this week showed that even among non-college-educated whites — the strongest demographic holdout for Trump — a plurality now say they'd like to see Congress be more of a check on the president. Since his election, he's down 14 points among the "poorly educated" that Trump once professed to love, a CNN poll found.

In West Virginia, where Trump could shoot the Mountaineer mascot and still walk at the head of a parade, attacks on Obamacare are killing Republican chances of taking down Senator Joe Manchin.

The other signature issue is the tax cut. Remember how Treasury Secretary Steven Mnuchin, another plutocrat who has trouble hiding his contempt for flyover country, described it last year? "Not only will this tax cut pay for itself," he said, "but it will pay down the debt."

We'll soon be running a trillion-dollar deficit, up 32 percent this fiscal year, thanks to the tax cut. Wasn't this the sort of thing that roused Tea Party opposition to President Obama — crippling our children with a legacy of debt?

The collapse in revenue will hurt Trump supporters in other ways. One is the paucity of federal dollars for investment — in community colleges, roads, opioid treatment, Pell grants for students, ultimately even Social Security or Medicare. Another is that, by forcing borrowing costs up, the Trump deficit contributes to rising interest rates. That makes it much harder for working families to buy homes.

In truth, economics will probably not move Trump supporters. Their vote for him was more about status anxiety in a changing nation than about financial uncertainty. They'll stay with him only so long as they allow themselves to be easy marks for the insulting con of this presidency.