Something to Know - 24 June 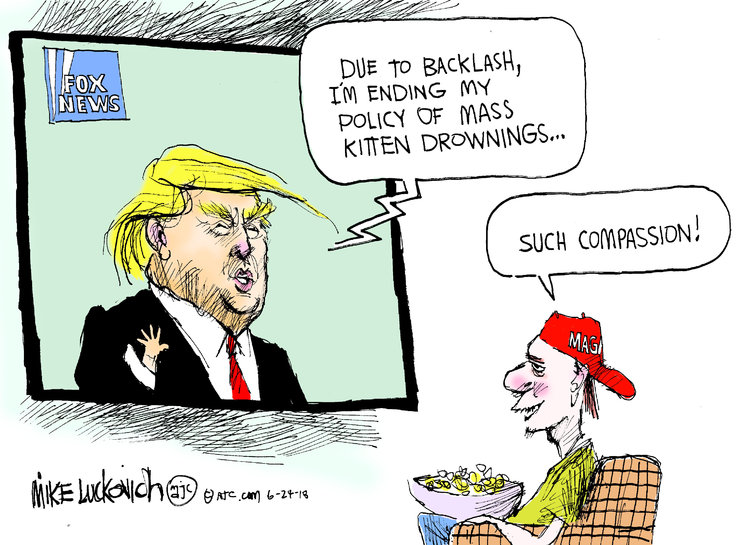 What is right and what is wrong?   The powers that be are essentially removing the sense of values and honesty on how they talk to us.  If they keep it up day after day, the sense is that the younger and less experienced will succumb to accepting a new way of being an American citizen.   It is up to the older and wiser to to defeat this.  It must be stopped and be recalibrated.

Trickle-Down Trumpsters and the Debasement of Language

On Father's Day last week, the highest-paid employee of Washington State University tweeted out a video of a 2014 speech by Barack Obama that was altered to make him sound like a one-world-government tyrant.

When called on the fraud, Mike Leach, the head football coach and $3.5-million-a-year representative of the same school that gave us the legendary newsman Edward R. Murrow, said, "Prove it."

It was easily proven as doctored. But instead of apologizing, and owning up to his dissemination of a fake conspiracy video, he then wrote, "What is a fact?" Of all the things President Trump has done to destroy civil norms, his debasement of language is the most chilling and poisonous. For it has now reached down to every level, allowing people who are supposed to be societal pillars, or even role models, to act as if reality has no foundation.

Trump's frightful legacy is not just the epidemic of everyday incivility in daily life. Nor is it his practice of using dehumanizing language to justify cruelty. The worst of the trickle-down Trump effects is the way he's opened the door for other public figures to get away with making things up. When a president is applauded for lying, why should a head football coach, or a cabinet secretary, feel any shame for doing the same thing?

To authoritarians, language is a weapon, usually deployed in the service of an emotional half-truth: something you believe to be true even if it isn't. Truth has to become meaningless — "What is a fact?" — in order for this strategy to work and morality to become a shapeless thing.

We saw it when Vice President Mike Pence called the former Arizona sheriff Joe Arpaio a champion of "the rule of law." Arpaio is a convicted criminal later pardoned by Trump. You can say he's a hero to the political right, or a fighter, but by no standard is a sheriff who was repeatedly called out for violating the law a champion of the rule of law.

And we saw it in graphic detail over the last week with the Trump administration policy of ripping migrant children from their parents. The cages holding weeping kids are "essentially summer camps," in the words of the Fox News host Laura Ingraham.

Worse, Homeland Security Secretary Kirstjen Nielsen said the administration's zero-tolerance policy that led to 2,300 children being taken from their parents didn't exist — "period." A day after saying this, she defended the policy that doesn't exist. And on Wednesday, Trump signed an order trying to resolve a crisis that he created, after saying earlier that he couldn't stop it because it was the fault of others, even if it did exist.

After a while, people come to "believe everything and nothing, think that everything was possible and that nothing was true," wrote Hannah Arendt, the German-born philosopher, in describing how truth lost its way in her native land.Everyone laughed when the North Korean news agency reported that the late Dear Leader, Kim Jong-il, scored five holes-in-one while playing a round of golf. But how is this any different from Trump saying this week that crime is "way up" in Germany when it just recorded the lowest year for crime in nearly three decades? Who is left to call him on this? The press, which he's labeled the "enemy of the American people"?

In North Korea, the masses are forced to believe the lies, something Trump clearly envies. "He speaks and his people sit up in attention," Trump said of Kim Jong-un. "I want my people to do the same."

The constant repetition of the lie is the way to make truth meaningless. You say a falsehood over and over and it takes on the shape of reality. This is the case for many of the 3,200 lies or misleading claims that Trump has uttered since taking office.

My larger concern today is this: How is a fact-based democracy supposed to function when the Trump toxins have gotten deep into the national bloodstream?

When Mike Leach was caught in his video lie, his university did not set the record straight. Washington State issued a meaningless statement backing its coach's right to his "personal opinions." And Leach himself said the actual words spoken by Obama are "irrelevant anyway" because "we are discussing ideas." All of this from an institution of higher learning.

And where did Coach Leach get this mush, an excuse that would be laughed off the field if one of his players tried it with him?