Not all news is about the Donald and his continuing adventures, and the damage created along the way.  You can tune in or read almost on an hourly basis about a different chapter in what should be the end of his book.  You want other news?.....well get a load of this.  Any of you who were planning or know of persons who were planning to cruise up or down the beautiful California Coast, should pay attention.   The road between Ragged Point and Gorda is closed in a very big way.   A mountain slid down over the road and into the sea, creating a problem.   How does one get around it? and what is it going to take to fix it?   Forget about any handy-dandy detour, there is none, unless you have a helicopter.  Estimates are in the billion dollar range and at least a year or two of major work.   So, you can scratch this drive off your bucket list.   Any entrepreneur who wants to develop a ferry boat offering a scenic and new experience between the two end/starting points of the closure, may be the only way to take in this beautiful part of the California scene:
https://www.nytimes.com/2017/05/24/us/big-sur-landslide-coastal-highway.html?emc=edit_tl_20170526&nl=travel-dispatch&nl_art=&nlid=2318049&ref=headline&te=1
Landslide Closes Section of Popular Coastal Highway in California
By CHRISTOPHER MELE MAY 24, 2017
Travelers in California enjoy the isolation that comes with driving along Highway 1, a serpentine route with steep cliffs known for its spectacular views of the Pacific Ocean.
That feeling of being cut off from civilization took on a different meaning on Saturday after more than 1 million tons of rock and dirt cascaded down a slope in a landslide the likes of which local officials said they had never seen before.
The slide buried about a quarter of a mile of the highway in dirt up to 40 feet deep. The road, also known as State Route 1,  was shut for about 12 miles from Ragged Point to Gorda, Calif., which is about 70 miles south of Monterey.
Aerial photos show a mound of dirt shaped like a duck's bill protruding 250 feet from the shoreline into the ocean. The hillside, with two long scrapes exposing stripes of brown, looked as if it had been clawed. 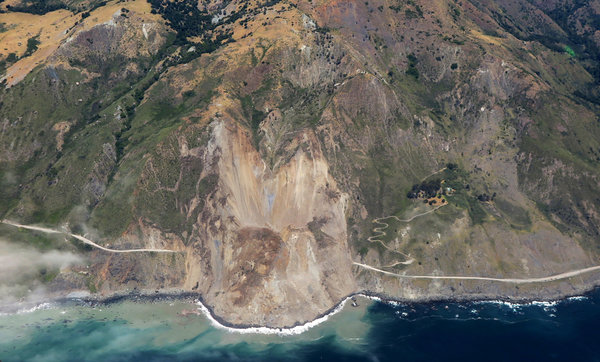 State officials do not have an estimate for when a section of Highway 1 will be opened.
No one was injured. The authorities said they could not estimate when the section of road would be reopened but said it would take months.
"This is by far the worst we've ever seen," Susana Z. Cruz, a spokeswoman for the California Department of Transportation, said on Wednesday.
Smaller landslides had been occurring at the site since January. That section had been recently closed to the public as crews worked to stabilize the hillside, but conditions deteriorated, and the workers were pulled out last week, she said.
There are enough landslides there that locals have names for them. This one was called  Arleen's Slide, after a longtime road flagger who works in that area.
Highway 1, which is more than 600 miles long with numerous hairpin turns, is a popular destination for tourists and sightseers.
It meanders jaggedly along the coastline in the state's Big Sur region and provides breathtaking views. It is dotted with rustic restaurants, resorts and campsites, and in the southern portion of the area, in San Simeon, Calif., it is known for a beach where elephant seals congregate and for the opulent Hearst Castle. 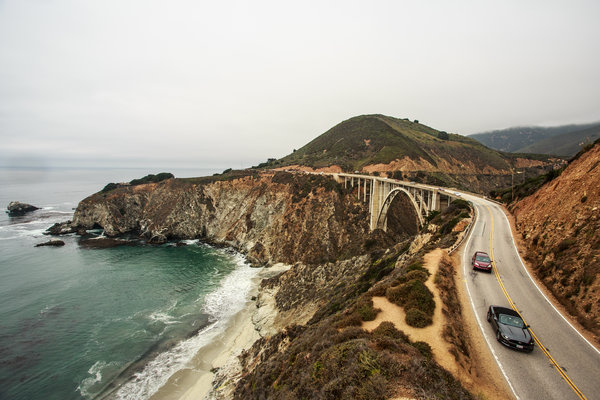 Highway 1 in California near the Bixby Creek Bridge.CreditMax Whittaker for The New York Times
The landslide on Saturday in an area called Mud Creek was the latest disruption to businesses and residents along the route. A project to replace the Pfeiffer Canyon Bridge farther north caused a section of Route 1 to be shut.
To cope with that road closure, a resort, the Post Ranch Inn, has transported guests by helicopter, Stan Russell, the executive director of the Big Sur Chamber of Commerce, said on Wednesday. He said it was "business as usual" north of the bridge project, which is expected to be completed by September.
As for the landslide, he said residents and businesses were accustomed to having crews  remove rocks from the road every day. "This one," he added, "this one, people are referring to as the mother of all landslides."
At the Ragged Point Inn and Resort in Ragged Point, Calif., reservations were down by 50 percent compared with last year, Cindy Conner, the hotel manager, said on Wednesday.
"If you look at our screen from last year, our reservations were completely filled," she said. "And now I'm looking just at a lot of white, which means vacancies."
The 39-room resort is open, but a barricade has been set up just beyond it, cutting off traffic that would be coming from or headed toward the area where the landslide happened. Ms. Conner said the resort is a popular wedding venue and is promoting deals for local residents.
She said guests have been disappointed to learn that they cannot head north beyond the resort.
"I've had people come in and say this was on their bucket list," she said. "It's sad."
A rainy and snowy winter — one of the heaviest on record in California — broke the state's five-year drought but also caused flooding and landslides.
"This type of thing may become more frequent, but Big Sur has its own unique geology," Dan Carl, a district director for the California Coastal Commission whose area includes Big Sur, told The Associated Press. "A lot of Big Sur is moving; you just don't see it."
Because of an editing error, an earlier version of this article misstated an alternate name for Highway 1 in Big Sur. It is Cabrillo Highway, not Pacific Coast Highway, a name for a different section of the route.
--
****
Juan
Patriotism is not a short and frenzied outburst of emotion but the tranquil and steady dedication of a lifetime.
- Adlai Stevenson