Something to Know - 21 March 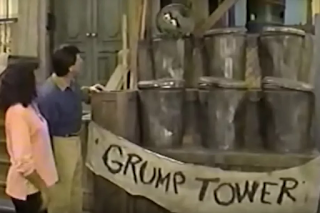 http://www.curbed.com/2017/3/20/14986102/donald-trump-sesame-street-parody-grump-tower
On the 11th of November, 2016,  our cruise ship docked in Miami.  It was 3 days after the election.  A strange new and surreal world, filled with angst and disgust filled my mind.  My wife and I quickly boarded another boat two days later for a week of Cuban history and muddled about the future of our country, thinking we may just seek asylum some place along the way.   Like millions of others, we groped for answers and explanations.  Time has a way of uprighting upset spirits and minds, and we find ourselves today with hope for the future.  We are now more familiar with those terms that we learned in school.  Things like Fascism, Authoritarianism, Oligarchy, Gilded Age, and Economic Inequality are all real, and all around us.  At the same time, we have new respect for our Democracy and Government, plus we seem to be more engaged in Civil Rights, and Political Will.   My wife and I are departing today on a long plane ride to New Zealand, and meeting up with some great friends from our college days for 35 days of travelling from Down Under up to Canada, and will be back in May.  We will have very little, if any, WiFi or Internet, or phone contact with the world.  Just 6 people bobbing up and down on the high seas, eating too much, but talking day and night about politics, books we read, and playing RumiKub, with a few glasses wine.   The next time I come ashore, and arrive back home, my hope is that the past 5 months were just a bad dream, and that the apathy and acceptance of mediocrity was a learning experience for our country.  After all, you never know how much you had until you struggle through the pains of almost losing it to get it back.
The Opinion Pages | EDITORIAL (New York Times)
Comey's Haunting News on Trump and Russia
By THE EDITORIAL BOARDMARCH 20, 2017
The acknowledgment by James Comey, the F.B.I. director, on Monday that the bureau is investigating possible connections between President Trump's campaign and Russia's efforts to sabotage Hillary Clinton's chances is a breathtaking admission. While there has been a growing body of circumstantial evidence of such links, Mr. Comey's public confirmation ought to mark a turning point in how inquiries into Russia's role in the election should be handled.
The top priority now must be to ensure that the F.B.I.'s investigation, which could result in criminal prosecutions, is shielded from meddling by the Trump administration, which has shown a proclivity to lie, mislead and obfuscate with startling audacity. Testifying before the House Intelligence Committee, Mr. Comey said the bureau is conducting its investigation in an "open-minded, independent way" and vowed to "follow the facts wherever they lead."
There is no reason to doubt Mr. Comey's commitment. But it is far from certain that senior officials at the Department of Justice, who normally decide whether there is enough evidence to file criminal charges in politically sensitive cases, will be able to avoid White House interference. Before Monday's hearing began, Mr. Trump issued a remarkable set of tweets calling the possibility of collusion with Russia "fake news" and urging Congress and the F.B.I. to drop the matter and instead focus on finding who had been leaking information to the press.
These brazen warning shots from the president do enormous damage to public confidence in the F.B.I.'s investigation. The credibility of the Justice Department in handling the Russian matter was already deeply compromised after Attorney General Jeff Sessions arrived in the job refusing to recuse himself from any investigation. He was forced to step aside only after it was revealed that, contrary to what he told senators under oath, he had met with the Russian ambassador to Washington twice during the campaign. Even with his recusal, it would still be his deputies and staff directing and managing any potential prosecution — which raises serious questions of conflict.
Mitigating this credibility crisis requires appointing an independent prosecutor, who would not take orders from the administration. If Mr. Trump's assertion that there was no collusion between his campaign officials and the Russian government is true, he should want this matter to be fully investigated as quickly and as transparently as possible.
Appointing a special prosecutor would show that Mr. Sessions is willing to have an impartial examination of his actions as a surrogate for Mr. Trump last year — which he has assured the public were entirely appropriate.
The decision to bring in a special counsel may fall on Rod Rosenstein, a career federal prosecutor who has been nominated to be deputy attorney general. Lawmakers from both parties should strongly encourage him to make that sensible and necessary decision.
As the F.B.I. investigation continues, a series of overlapping congressional inquiries into Russian activities to influence the election are advancing in a predictably muddled, partisan way. Democrats on the House Intelligence Committee are working to produce a detailed timeline showing all the reported contacts between people close to the Trump campaign and the Russian government during the campaign. Most Republicans want to keep the focus on leaks of classified information.
This matter requires a broader investigation run by a collaborative, bipartisan team of statesmen. The ideal format would be a select committee that has subpoena power and a mandate to issue a comprehensive report of its findings. The goal must be to make American political parties and democratic institutions less vulnerable to efforts to distort the electoral process as the Russians appear to have carried out. Failing to learn and heed the lessons of last year's campaign would be an abdication of a shared responsibility to safeguard American democracy.
--
****
Juan
"We're going to have insurance for everybody" — with coverage that would be "much less expensive and much better."
- TrumpCare as promised  by the so-called 45th President