Something to Know - 22 February

Let's take a look-see at a SITREP - Situation Report, on "The Wall".   This whole concept, project, and promise from the Orange One was a cornerstone of his campaign.   It's not rolling out as he had said it would, and constraints and costs are factors in this being something that Humpty Dumpty may not be able to sit on.   I find that going to the Guardian news provides a fresh look as to what is happening:  (Guardian articles are difficult to edit down to eliminate content distractions; sorry so go to the link for better viewing)
https://www.theguardian.com/world/2017/feb/22/donald-trump-envoys-head-to-mexico-cracks-emerge-border-wall-plan?utm_source=esp&utm_medium=Email&utm_campaign=GU+Today+USA+-+Collections+2017&utm_term=214519&subid=18959966&CMP=GT_US_collection

Mexico will host its first high-profile Donald Trump envoys this week with at least one consolation: the proposed border wall is itself walled in, for now, by Washington bureaucracy.

Federal agencies are reportedly resisting the idea and Congress is hesitant to fund it, leaving the president fighting a lonely battle to keep his campaign promise.

Instead of a 2,000-mile "big, beautiful wall", Trump may emerge from Washington's policy labyrinth with a fence covering a few hundred miles.

"He hasn't made any progress other than to say 'we're going to do it'," said Seth Stodder, a former senior homeland security official who focused on border security under the Obama and Bush administrations. "They're pretty far away. I don't think they've made much progress." 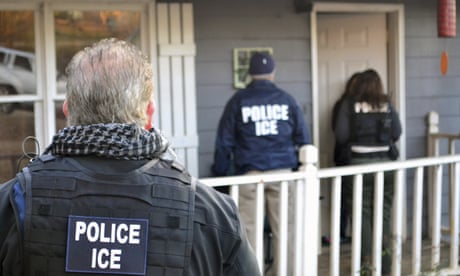 The apparent crack in the promise of a wall will be about the only bright spot, from Mexico's viewpoint, when President Enrique Peña Nieto and other officials meet Rex Tillerson, the secretary of state, and John Kelly, the head of homeland security, for talks in Mexico City on Wednesday and Thursday.

The Trump administration unveiled two memos on Tuesday that broadened the ways in which federal immigration laws should be enforced, laying the groundwork for potentially millions of deportations to Mexico.

As a result, federal authorities could more aggressively detain undocumented immigrants, expand the pool of immigrants prioritised for removal, restrict asylum claims and send non-Mexican border crossers back to Mexico, rather than their country of origin.

Compared with that, uncertainty about the wall will seem relatively benign.

Last month Trump signed an executive order directing its construction to block drugs, criminals and terrorists. "Beginning today, the United States of America gets back control of its borders," he told employees at the Department of Homeland Security's headquarters in Washington.

At a press conference he repeated the pledge that a concrete barrier will arise along the desert bordering Mexico. "It's a wall," he told a reporter who termed it a fence. "You just misreported it. We're going to build a wall." He insisted Mexico will eventually pay for it.

Kelly, the homeland security chief, told Fox News that construction could begin within months and be completed within two years. "The wall will be built where it's needed first and then it will be filled in." His department issued a memo on Monday vowing to "begin planning, design, construction and maintenance of a wall".

Officials have sought waivers to address environmental restrictions on building in some areas and spoken to contractors about buying steel.

Such confidence, however, seems built on uncertain foundations. Bureaucratic, budgetary and logistical forces may turn the wall mainly into a fence and truncate its length.

The administration has yet to present a plan, let alone a blueprint, to Congress. One reason is that key government agencies deem a wall too pricey, difficult and of limited value.

A preliminary internal report by US Customs and Border Protection leaked to Reuters envisages various construction phases over three years of what it terms a "fence" and "wall/fence".

The report said the first phase would focus along stretches of California and Texas totalling 26 miles. The second would cover 151 miles in Arizona and Texas. The third phase would cover an unspecified 1,080 miles, linking the barriers coast-to-coast.

CNN cited unnamed insiders and experts who deemed the third phase a "fantasy"and not under serious consideration. It also quoted Border Patrol agents who grumbled that a wall would obstruct views of the other side and that security depended on personnel, surveillance equipment and speedy interception.

A Border Patrol agent who gave the Guardian a tour of the Nogales in Arizona – part of the nearly 700 miles which are already fenced – sidestepped opining about a wall, saying: "We have layers of defence." He also cited traffickers' ability to tunnel.

The leaked report envisaged a cost of as much as $21.6bn (£17bn) – far more than the $12bn cited by the president. He responded via Twitter saying once he got involved in design and negotiations the price would come "WAY DOWN!"

The emphasis was telling because the wall's fate hinges largely on the price tag. Mexico has vowed to not pay a cent and there are doubts about raising funds through taxing imports or remittances. The Republican-controlled Congress is filled with budget hawks who want to shrink, not swell, spending.

Bernstein Research, an investment research group that tracks material costs, said uncertainties around the project could raise costs up to $25bn.

"The administration has all the legal authority it needs to construct more wall. And Trump personally wants a concrete wall," said Stodder. Capitol Hill, however, could demolish it. "I have no confidence Congress will authorise $20bn to build a wall across the US given the current budgetary environment."

Donald Trump's wall: a fitting monument for an unfit leader

Despite his ardour for concrete, Trump's executive order left room for retreat by defining the wall as a "contiguous, physical wall or other similarly secure, contiguous, and impassable physical barrier".

There are other impediments. Environmentalists are gearing up to defend desert habitats, saying the wall could threaten 111 endangered animal species. Campaigners are lobbying authorities in San Francisco and New York to boycott any companies that work on the barriers.