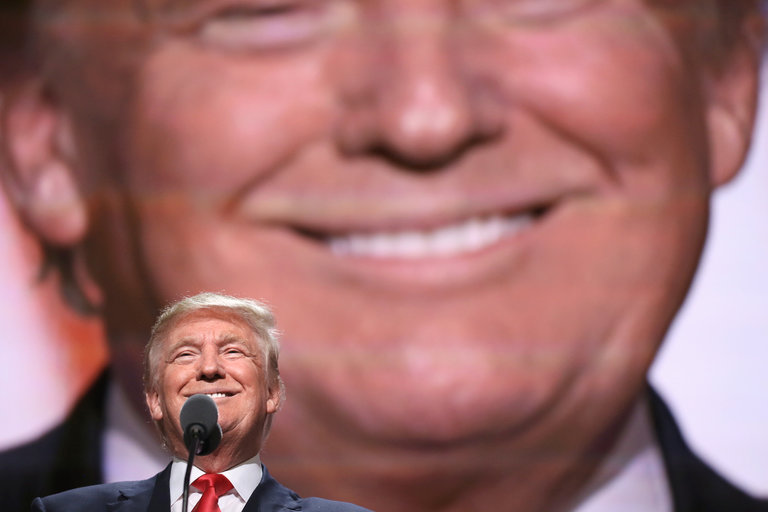 BOROWITZ REPORT
TRUMP SUCCEEDS IN DELIVERING SPEECH NO ONE WILL WANT TO PLAGIARIZE
By Andy Borowitz , 09:34 A.M.
CLEVELAND (The Borowitz Report)—Donald J. Trump was jubilant Thursday night after accomplishing his goal of delivering a speech that no one will ever want to plagiarize, Trump aides confirmed.
According to his staff, Trump and his speechwriters had been working overtime during the week to create a tirade that was sufficiently bloated, unhinged, and terrifying to discourage potential plagiarists from reusing excerpts in the future.
Paul Manafort, Trump's campaign manager, said that, right until the hour the candidate took the stage, the billionaire's writing team was scrubbing the speech of any marginally coherent passages that might prove tempting to plagiarists.
"There was one sentence toward the beginning that had traces of humanity and rational thought," Manafort said. "Fortunately, we caught it in time."
Watching from backstage on Thursday night, Manafort and the speechwriters erupted into a flurry of high-fives when it became clear that the speech was the rambling, demented mess they had worked so hard to create. "From the moment Mr. Trump started shrieking and his entire head turned red, we knew we had nailed it," he said.
Harland Dorrinson, a leading plagiarism expert, shared the campaign's assessment that the final draft of Trump's seventy-minute rant was too repellent to entice even the least discerning plagiarist.
"I can't see anyone lifting anything from that speech unless he wanted to sound totally batshit crazy," he said.
--
****
Juan