Something to Know - 17 April This column, from the NY Times, burrows in on Hillary's personal fault of not admitting that she may have made
mistakes in the past or that she is incapable of seeing that she may have ever done anything wrong.
Kind of like the Trumpet who is always right and never wrong.   Serious voters find it hard to rally behind this kind
of façade.   This personality trait is not a game killer, but stacked with other faults, it cannot be a good way to go
forward in the final stretch:
http://www.nytimes.com/2016/04/17/opinion/sunday/hillary-is-not-sorry.html?emc=eta1
If you prefer to read this on a special website with access to archived articles of Something to Know, please go to:
http://www.thejuanpercent.com/    This is also better for small screen smart phones to view from a landscape perspective.   4/15/16

Hillary Is Not Sorry 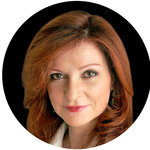 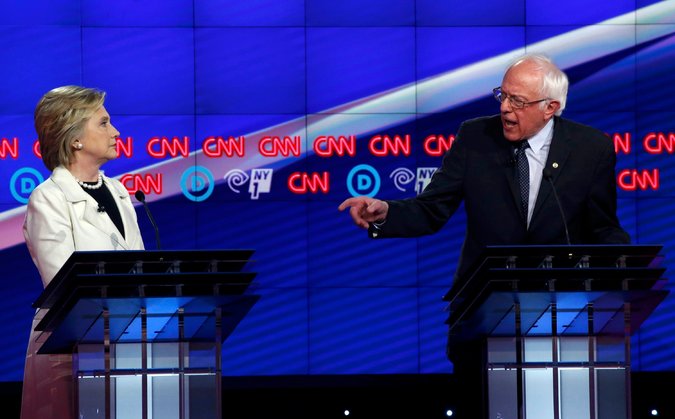 Hillary Clinton and Bernie Sanders debating in New York on Tuesday. CreditLucas Jackson/Reuters
WASHINGTON — IT'S hard not to feel sorry for Hillary Clinton. She is hearing ghostly footsteps.
She's having her inevitability challenged a second time by a moralizing senator with few accomplishments who chides her on her bad judgment on Iraq and special-interest money, breezily rakes in millions in small donations online, draws tens of thousands to rock-star rallies and gets more votes from young women.
But at least last time, it was a dazzling newcomer who also offered the chance to break a barrier. This time, Hillary is trying to fend off a choleric 74-year-old democratic socialist.
Some close to the campaign say that those ghostly footsteps have made Hillary restive. The déjà vu has exasperated Bill Clinton, who griped to an audience in New York on Friday that young supporters of Bernie Sanders get excited because it sounds good to say, "Just shoot every third person on Wall Street and everything will be fine."
At the Brooklyn debate, there was acrimony, cacophony, sanctimony and, naturally, baloney.
Hillary gazed at Bernie as though she could hypnotize him into skedaddling. And Bernie waved his index finger and flapped his hands, miming that he won't budge, no matter how aggravating it is for Clinton Inc.
Sanders flew to the Vatican that night to underscore his vision of himself as the moral candidate. And Hillary headed to California, underscoring Bernie's portrayal of her as the mercenary candidate. She attended fund-raisers headlined by George and Amal Clooney in San Francisco and at the Clooneys' L.A. mansion that cost $33,400 per person and $353,400 for two seats at the head table in San Francisco — an "Ocean's Eleven" safecracking that Sanders labeled "obscene."
Clinton sowed suspicion again, refusing to cough up her Wall Street speech transcripts. And Sanders faltered on guns, fracking and releasing his tax returns. But he was gutsy, in a New York primary, to say he'd be more evenhanded with Israel and the Palestinians. As my colleague Tom Friedman has warned, we can hurt Israel by loving Israel to death.
Hillary alternately tried to blame and hug the men in her life, divvying up credit in a self-serving way.
After showing some remorse for the 1994 crime bill, saying it had had "unintended" consequences, she stressed that her husband "was the president who actually signed it." On Libya, she noted that "the decision was the president's." And on her desire to train and arm Syrian rebels, she recalled, "The president said no."
But she wrapped herself in President Obama's record on climate change and, when criticized on her "super PACs," said, well, Obama did it, too.
Sanders accused her of pandering to Israel after she said that "if Yasir Arafat had agreed with my husband at Camp David," there would have been a Palestinian state for 15 years.
Hillary may be right that Bernie is building socialist castles in the sky. But Bernie is right that Hillary's judgment has often been faulty.
She has shown an unwillingness to be introspective and learn from her mistakes. From health care to Iraq to the email server, she only apologizes at the point of a gun. And even then, she leaves the impression that she is merely sorry to be facing criticism, not that she miscalculated in the first place.
On the server, she told Andrea Mitchell of NBC News that she was sorry it had been "confusing to people and raised a lot of questions." She has never acknowledged, maybe even to herself, that routing diplomatic emails with classified information through a homebrew server was an outrageous, reckless and foolish thing to do, and disloyal to Obama, whose administration put in place rules for record-keeping that she flouted.
Wouldn't it be a relief to people if Hillary just acknowledged some mistakes? If she said that her intentions on Libya were good but that she got distracted by other global issues and took her eye off the ball? That the questions that should have been asked about Libya were not asked and knowing this now would make her a better chief executive?
Obama, introspective to a fault, told Chris Wallace of Fox News that not having a better plan after Muammar el-Qaddafi was overthrown was the worst mistake of his presidency. But as usual, Clinton, who talked Obama into it, is defiantly doubling down. As her national security advisers told Kim Ghattas for a piece in Foreign Policy, Clinton "does not see the Libya intervention as a failure, but as a work in progress."
Clinton accused Sanders of not doing his homework on how he would break up the banks. And she is the queen of homework, always impressively well versed in meetings. But that is what makes her failure to read the National Intelligence Estimate that raised doubts about whether Iraq posed a threat to the U.S. so egregious.
Like other decisions, it was put through a political filter and a paranoid mind-set. She did not want to be seen, in that blindingly patriotic time, as the bohemian woman standing to the left of the military.
When Barack Obama was warned by some supporters in 2002 not to make a speech against the Iraq invasion because it might hurt his political future, he said he was going to do it anyhow because the war was a really terrible idea.
What worries me is whether Hillary has the confidence to make decisions contrary to her political interests. Can she say, "But it's a really terrible idea"
--
****Juan
Donald Trump aids and abets violence.
- An American Story
Posted by 1ma2t