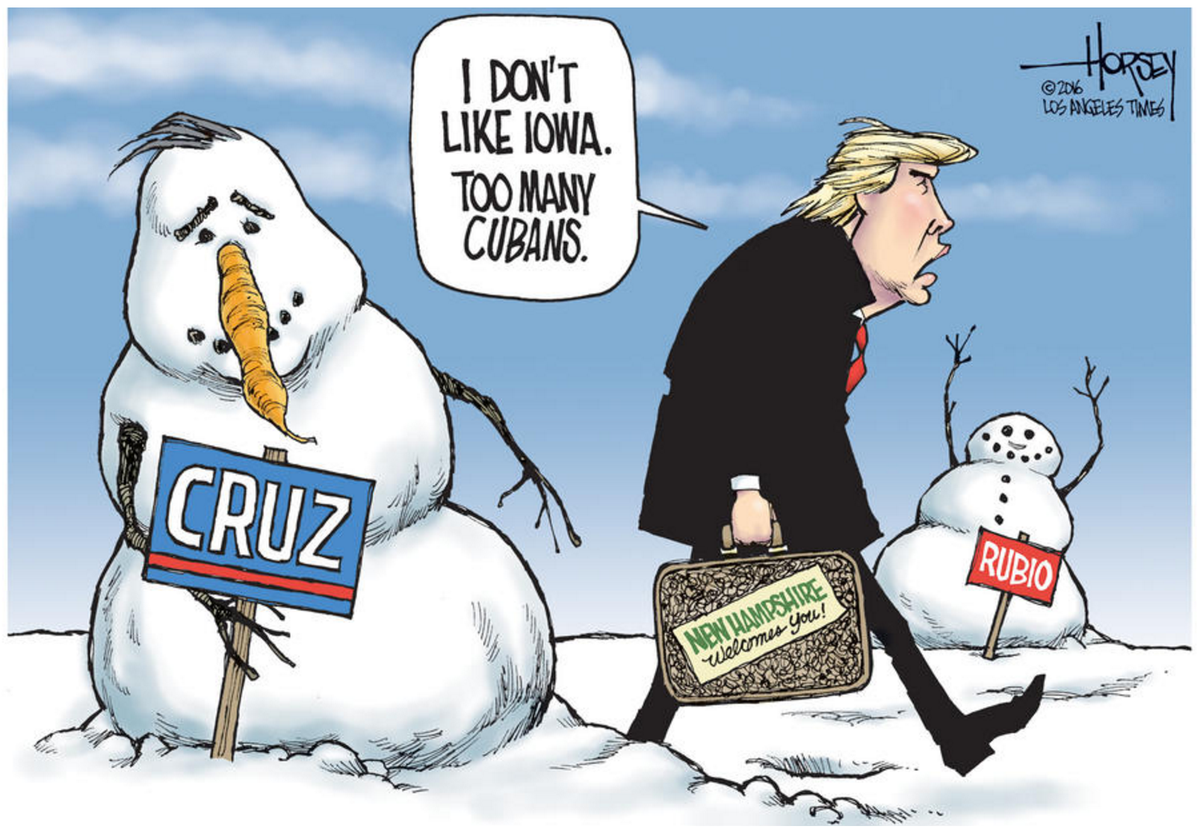 While the remaining GOP candidates are engaged in their close-caged wrestling contests, very entertaining as they are, nothing of benefit arises.   Now, on the other side, the Democrats have their own; the Bernie and Hillary Show.  This article in today's LA Times gets down to the nitty-gritty of each candidate, and how they are coming across.   Bernie, having come from an obscure beginning, has momentum and authenticity going for him.  Unfortunately, Hillary has come from having everything and has been thrown into a defensive position by the political successes of Bernie.   Ronald Brownstein has an analysis of how things are going for both of them, so far:
Sanders inspires; Clinton perspires
RONALD BROWNSTEIN
HILLARY CLINTON'S close call in Iowa has given her new reason to reflect on the old adage that history repeats itself, first as tragedy, then as farce.   Surely for Clinton it was one thing to lose Iowa, and the Democratic nomination, in 2008 to Barack Obama, a comet of a candidate, trailing charisma and historical possibility. She was a formidably appealing candidate herself, but Clinton's tragedy was that her chance to become the first woman president was eclipsed by Obama's opportunity to shatter, arguably, an even more profound barrier.   This time, Clinton is sweating against a candidate conspicuously lacking Obama's natural gifts. Bernie Sanders is a rumpled 74-year-old "democratic socialist" who didn't call himself a Democrat until last year. His power base is a state that is a national force in maple syrup and funky Ben & Jerry's ice cream flavors. He honed his political skills on the mean streets of Burlington, Vt. Obama, with his elegant and icy cool, evoked comparisons to John F. Kennedy; Sanders has been indelibly impersonated by Larry David. As a presidential candidate, Sanders has displayed genuine political talents. But if losing to Obama reached the level of tragedy for Clinton, failing against Sanders would qualify as farce.   Still, even after Iowa's photo finish, Clinton's biggest worry isn't failing against Sanders but what she might face if she beats him.   In Iowa, Sanders managed to advance beyond his initial beachhead of younger voters and well-educated white liberals — the same "wine track" constituency that couldn't provide enough votes to nominate previous Democratic hopefuls like Eugene McCarthy, Gary Hart and Bill Bradley. Sanders ran evenly with Clinton among white voters in Iowa without a college education, according to the election-night entrance poll, making working-class inroads that had generally eluded his wine track predecessors. Yet Sanders still must cross two big hurdles before he can truly threaten Clinton. He faced gaping deficits in Iowa among minorities and among all voters who identified as Democrats. (Sanders relied on big margins among independent voters who participated in the caucus.) Without substantial improvements on both fronts, he can't prevail in the primaries. Full stop.   But, whether or not Sanders ultimately defeats Clinton, he has spotlighted a glaring weakness in her candidacy: an inspiration gap, particularly among the young. This may be where Clinton's 2008 and 2016 experiences meet most decisively. Clinton also lagged badly with young people against Obama. In that race, exit polls across all the primary contests found Obama beat her by 20 percentage points among voters younger than 30.   In Iowa, Sanders routed Clinton among young voters even more thoroughly than Obama did. Gender was no defense. Breakdowns provided by the CNN polling unit show that among Iowa voters younger than 30, Sanders not only won 84% of men, but also 84% of women. At a raucous Sanders rally at the University of Iowa last weekend, young women repeatedly told me that they considered septuagenarian Sanders "the best candidate for our generation," as Kathleen Trombley, a university junior, put it. "I'd rather," she added, "vote for someone I fully believe in rather than for someone just based on gender." Ouch.   Clinton can survive the resistance among young people during the primaries because she enjoys nearly comparable advantages among voters older than 45, who cast nearly three-fifths of all Democratic ballots in 2008. The case that Sanders is stirring unachievable hopes and that she can shoulder more incremental change through the clogged current political system resonates more with older voters who know how often life frustrates grand plans. Likewise, Clinton's self-portrayal as a fighter with the scars to prove it speaks more to those carrying the disappointments of middle age (and beyond) than to those whose faces are still unlined by care.   Clinton's generation gap would pose a greater challenge if she wins the Democratic nomination. For the first time, the millennial generation this year will nearly equal baby boomers as a share of eligible voters, and Democrats need big margins from those young people. Telling them it's unrealistic to expect transformative change is unlikely to inspire the support — or turnout — that Clinton would need to prevail in the general election, even if millennials prefer her to the Republican nominee.   Clinton's problem is that "Democrats are being asked to settle and they don't want to settle," said Simon Rosenberg, the founder of the Democratic think tank NDN. "They want to be inspired and they want to fight." Instead, in her posture toward Sanders's supporters, especially younger ones, Clinton risks positioning herself as the chaperone at a frat party. Tenacity and resilience are powerful qualities in a president. Yet to win not only the nomination but also the general election, Clinton will probably have to sell something more uplifting than her capacity to take a punch.   RONALD BROWNSTEIN is a senior writer at the National Journal. rbrownstein@nationaljournal.com
--
****
Juan