Something to Know - 20 August

Normally I have a cartoon and some intro for the day's posting.  There is no room for funny stuff or written expansion, other than to say that we know what Trump has said about Immigration, and we have come to expect it from him.  What is the real tragedy is the spectacle of extremely weak and unprincipled Republicans -supposedly the leaders of the other party- behave in such a shabby and tawdry manner:
http://www.nytimes.com/2015/08/20/opinion/gop-candidates-follow-trump-to-the-bottom-on-immigration.html?emc=eta1

G.O.P. Candidates Follow Trump to the Bottom on Immigration 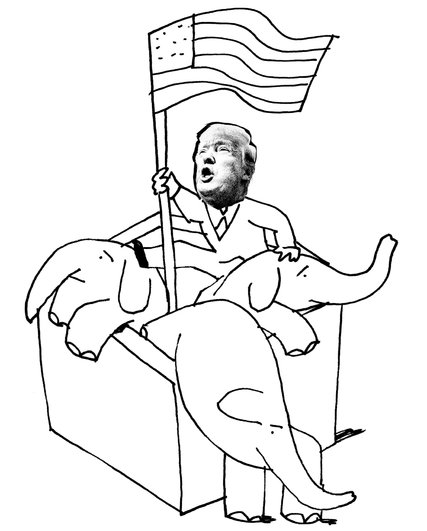 Before Donald Trump, Republican presidential candidates could deflect tough questions on immigration with vague promises to secure the border and oppose all "amnesty" for illegal immigrants.

Not anymore. Mr. Trump has offered a plan to "take back our country" from what he calls the rapist-murderer-job stealers being exported from Mexico. He is full of ideas. He would expel 11 million immigrants, and their families, and let only "the good ones" back in. He would restrict legal immigration, and impose a national job-verification system so that everyone, citizens too, would need federal permission to work. He would build a 2,000-mile border wall and force Mexicans to pay for it. He would replace the Constitution's guarantee of citizenship by birth with citizenship by bloodline and pedigree, leaving it to politicians and bureaucrats to decide what to do with millions of stateless children. He would flood the country with immigration agents and — it almost goes without saying — dismantle the economy and shred America's standing as an immigrant-welcoming nation.

You could say the front-running Mr. Trump has put his opponents in a bind. Or you could say he has given them a gift: the opportunity to be specific in return about what they would do to fix the immigration mess. And to be forthright in rejecting his despicable proposals. Because his plan is so naked — in its scapegoating of immigrants, its barely subtextual racism, its immense cruelty in seeking to reduce millions of people to poverty and hopelessness — it gives his opponents the chance for a very clear moral decision. They can stand up for better values, and against the collective punishment of millions of innocent Americans-in-waiting.

But as Mr. Trump swells in the polls, his diminished opponents are following in his wake, like remoras on a shark. Several have shuffled onto the anti-birthright-citizenship bus, including Rick Santorum, Senator Rand Paul of Kentucky, Ben Carson and Gov. Chris Christie of New Jersey. Even Senator Lindsey Graham of South Carolina, who once fought for smart bipartisan immigration reform, wants to repeal birthright citizenship. As does Gov. Bobby Jindal of Louisiana, a birthright citizen himself. As for Mr. Trump's other restrictionist proposals, several are firmly lodged again in the playbook of a Republican Party that briefly tried to reform itself after the Mitt Romney debacle. Some candidates are even willing to try to trump Mr. Trump in xenophobia: Mr. Carson is talking about using armed military drones at the border. That's right — bombing Arizona.

Jeb Bush and Senator Marco Rubio of Florida understand immigration issues deeply and presumably want the Latino vote and are well aware of the dangers of having their party hijacked by far-right ideas. They should be opposing Mr. Trump at every turn. But in the face of Mr. Trump's success, their objections are mild, and oddly muted. The danger is that when the campaign is over, no matter what becomes of Mr. Trump's candidacy, he will have further poisoned the debate with his noxious positions, normalized an extremism whose toxicity is dulled by familiarity and is validated by a feckless party. He has emboldened the fringe lawmakers whose "hell no" on any positive immigration legislation has stymied reform for years.

The solutions are well known. Americans strongly support an earned path to citizenship for immigrants, strengthening families and industries and giving strivers the chance to pay this country back. Even as reform festers at the federal level, forward-thinking cities like New York and states like California have taken assertive steps, offering official documents like driver's licenses and identity cards, and tuition breaks and other means of inclusion, to offer immigrants opportunities, all for the common good.

Ideas like these are realistic, practical and have the added benefit of being morally defensible. It has long been a hard job to keep the highly combustible immigration debate on the right side of sanity and reality. That progress is now being undone before our eyes in the presidential campaign, courtesy of the faux-populist billionaire wh

In individuals, insanity is rare; but in groups, parties, nations and epochs, it is the rule.