Something to Know - 18 January

This is an excellent article for your reading.  The Los Angeles basin is home to many Mexican-Americans, both recently arrived and those of several generations.  To understand the how the understanding, or lack of it, on how this melting pot of different generations and of even greater ethnic groups regard the community political system and how it empowers the unscrupulous and corrupt to take advantage is what this story is about.   As you read this, consider how this may apply to any immigrant community in this country, and how the process of a civics lesson transforms these communities to an understanding of a concerned and active political force to affect change:
http://www.nytimes.com/2015/01/18/opinion/sunday/how-mexicans-became-americans.html?emc=eta1 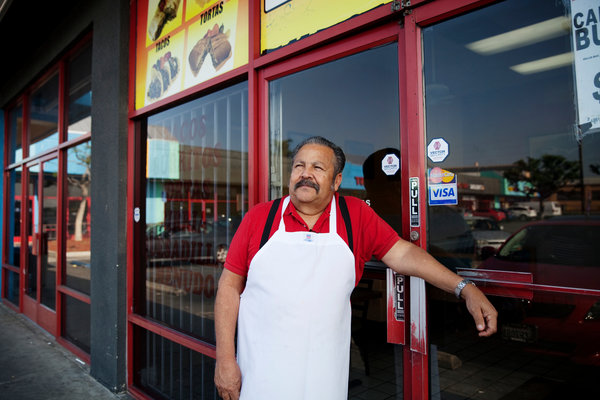 Jesus Miranda, a new commissioner of the South Gate Advisory Board, outside his restaurant, LAX Tacos, last week.CreditEmily Berl for The New York Times
Share This Page
Continue reading the main story

SOUTH GATE, Calif. — A FEW weeks ago, the City Council in this suburb southeast of Los Angeles appointed a Mexican immigrant to its advisory council. Jesus Miranda is from Michoacán and owns a taco restaurant here. He'll advise the council on housing development and other issues.

Mr. Miranda's appointment is hardly national news. But small moments like these are signs of a historic change of heart toward America and civic engagement among Mexican immigrants, many of whom, like Mr. Miranda, have been here for decades. No place offers a clearer view of this change than the suburbs southeast of Los Angeles.

Then, in the late 1970s, the factories started leaving, and so did the white people. Their civic institutions atrophied. By 1990, towns like South Gate that had been 90 percent white were more than 90 percent Latino.

The new residents, crucially, were not from East Los Angeles, where Mexican-Americans had developed an activist political tradition since the 1960s. Instead, they were Mexican, straight from the ranchos — small villages on Mexico's frontiers, far from the center and from government. Most came here to work in jobs they believed, even after decades, would be temporary. They focused their lives on returning home someday. They packed into cheap housing and spent their savings on building homes back in Mexico.

Mexican rancho culture valued self-reliance and hard work. But rancheros also shunned politics, and, in particular, the paternalistic embrace of the PRI, the party that ran Mexico like Tammany Hall for 71 years. Immigrants brought that history with them, and in the dense southeast enclaves, their attitudes didn't change.

This tradition of non-engagement, combined with Mexico's proximity to California, meant that this wave of immigrants was fundamentally different from previous groups in other parts of the country.

Arriving in the United States, the Irish in Chicago, Italians in New York and Cubans in Miami came for good. They wedged their way into big cities using politics as the crowbar to more economic opportunity, and jobs in government. They had to compete with, and learn from, established groups and elites.

This was not the case for Mexicans in the California suburbs. As the region morphed into a service economy, they easily found work. In 1986, Congress passed legislation granting amnesty to around 800,000 immigrants in Los Angeles County, many of whom eventually acquired citizenship. Suddenly many residents were voters, yet without any tradition of informed franchise or accountability. What's more, those who lived out in these Los Angeles suburbs had no one to show them a way to civic engagement. Not many had the education, or English, necessary to run a California municipality. Caring little for politics, they avoided city hall and rarely participated in civic institutions.

In this vacuum, beginning in the mid-1990s, an astonishing cast of scoundrels was voted into office by immigrants casting the first votes of their lives.

In South Gate, an unhinged brand of politics mutated, based on anonymous fliers. In 1999, one council candidate was accused, in a fake newspaper article reprinted in an anonymous flier, of molesting two boys. In 2001, anonymous fliers mailed to voters falsely claimed that two councilmen had fathered children they later abandoned. Tapping immigrants' deep connection to Mexico, fliers, in Spanish and English, accused candidates of being related to Carlos Salinas de Gortari, the disgraced ex-president of Mexico, and of belonging to the PRI.

These fliers seem clownish, but immigrant voters believed them.

The council majority that won power paid voters back with classic PRI-style giveaways: free hot dogs and sodas at first, and then toys one Christmas. Once in power, it was police badges to cronies and millions of dollars to law firms.

Eventually, enough voters woke up. Ashamed they'd been duped, they recalled the treasurer and his cronies in 2003. The treasurer was later prosecuted and sent to federal prison. South Gate, however, was on the brink of bankruptcy.

Most southeast towns, stripped of their civic girdings, have gone through similarly toxic municipal episodes.

María Chacón, an immigrant from Chihuahua who ran Bell Gardens (pop. 42,000) like a Mexican cacique, or political boss, was convicted of conflict of interest for engineering her appointment as city manager.

The town of Cudahy hired a former janitor as city manager, and an opposing candidate had a Molotov cocktail thrown at his house.

In Bell (pop. 36,000), the city manager voted himself and others annual salaries well above that earned by the president of the United States. He and his former assistant are now in prison. Five southeast suburbs, in fact, had at least one elected official go to prison in the last dozen years.

But each boil of corruption, once lanced, left its respective town a little cleaner, more chastened.

Today, a virtually secured border has significantly slowed the flow of new immigrants who kept ranchero political culture alive. Mexico's recent medieval violence has also terrified many of those who are already here into staying put.

As a result, many Mexican immigrants no longer cling to the dream of returning home one day. This change is happening across the United States — from Idaho to North Carolina — but it is most palpable in these Mexican immigrant enclaves of Los Angeles County.

"I get the sense that folks now see this as home," said Jorge Morales, a South Gate city councilman and son of Mexican immigrants. "My parents always talked about going back to Mexico. Now it's a place they'll visit, but this is home."

Last summer, a shopping center opened in South Gate. It was to be called El Portal (The Gateway), but a market survey found that people in an area that is more than 90 percent Latino wanted no Latino theme to the center. "What people wanted was something like they saw on the West Side" of Los Angeles, which is predominately white, said Councilman Morales.

The Azalea Regional Shopping Center, as it was named instead, held a Christmas-tree-lighting ceremony last month, at which members of South Gate's Girl Scout Troop 16325, Latinas all, sang "Jingle Bells" and "Rudolph the Red-Nosed Reindeer."

No Girl Scout troop had existed in South Gate for some three decades. But two years ago, a local mother got fed up with driving her daughter two towns over and formed her own troop. "People are getting involved, coming out of their shells," Daisy Prieto, the volunteer troop leader, and daughter of Mexican immigrants, told me.

MEANWHILE, immigrants like Mr. Miranda have learned to use city hall, and local government has become significantly more professional since the days of rancid fliers and giveaways. At a recent meeting, the City Council took up mundane but essential municipal issues: purchasing a diesel flatbed truck, zoning for emergency homeless shelters and appointments to its advisory council. The town's advisory councils are populated by a healthy mix of white and black, as well as Latino.

South Gate's experience stands as a template for hundreds of small towns in Tennessee, the Carolinas, Kansas and elsewhere — towns that have been rejuvenated by new Mexican workers, who now form their essential working classes, yet remain civically absent.

When I started reporting on the southeast suburbs in the 1990s, they felt to me like one enormous Mexican rancho — the way the Lower East Side of Manhattan must have once seemed a big shtetl. Today, they feel like an iceberg finally separating and floating away from mother Mexico. People are more focused on how things run where they raise children than in villages they'll never return to.

It's taken a long time. But it is a good thing for Mexican immigrants and for the small American towns where so many have landed.

Sam Quinones is a journalist based in Los Angeles and the author of "Antonio's Gun and Delfino's Dream: True Tales of Mexican Migration."

If you don't like something, change it. If you can't change it, change your attitude.