Something to Know - 16 January

The ongoing reaction in the aftermath to the murders by Islamic extremists in Paris are in need of careful observation and review.    It is necessary that something needs to be done, but the problem is what?   The outpouring of grief and the standing by in solidarity is the same as the the aftermath of 9-11 and Sandy Hook.  However, in my opinion, what follows as far as reaction in the form of sanctions, retribution is fraught with unintended consequences, and must be carefully measured an instituted.   Turning the world into a police state, with harsh and severe consequences can and will hurt and alienate millions of innocent people and further exacerbate the situation.   As this editorial from the NY Times cautions, we need to be prudent an reasoned on how we go from here.   One big problem is the "we", since each nation has its own political and social agenda to conduct, and perhaps the United States should overcome its initial screw up and set the tone:
http://www.nytimes.com/2015/01/16/opinion/after-paris-attacks-wrong-responses-to-charlie-hebdo.html?emc=eta1 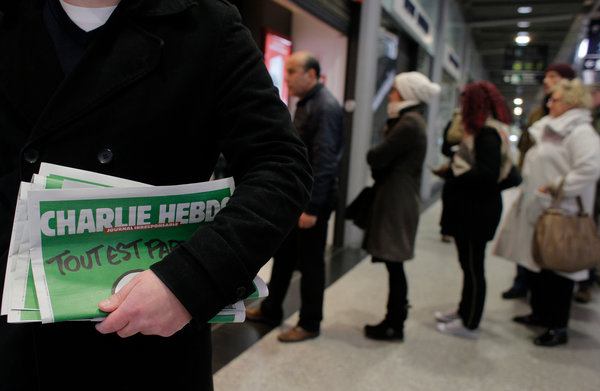 Leaders in Europe are justifiably trying to figure out what they should be doing to prevent terrorist attacks like the recent massacre at the satirical French newspaper Charlie Hebdo. Regrettably, some politicians are proposing the kind of Internet censorship and surveillance that would do little to protect their citizens but do a lot to infringe on civil liberties.

In Paris, a dozen interior ministers from European Union countries including France, Britain and Germany issued a statement earlier this week calling on Internet service providers to identify and take down online content "that aims to incite hatred and terror." The ministers also want the European Union to start monitoring and storing information about the itineraries of air travelers. And in Britain, Prime Minister David Cameronsuggested the country should ban Internet services that did not give the government the ability to monitor all encrypted chats and calls.

Even before the Charlie Hebdo attack, European leaders were proposing or enacting harsh measures. For example, the French Parliament passed a law in September that allows the authorities to temporarily seize the passports and identity cards of citizens who seem intent on joining foreign terrorist organizations. And this week, French officials said they had arrested 54 people for hate speech, including a controversial comedian.

Appealing as these measures may sound in the aftermath of a tragedy, they are deeply flawed. Countries like France and Germany have long had stricter controls on speech than the United States. For example, their governments have in the past forced Internet firms like Yahoo and Twitter to take down Nazi propaganda. But those decisions are generally made by government officials or judges, not technology companies.

Internet service providers do not have the staff or the skill to determine what content is likely to lead to terrorist attacks. That is why a blanket mandate to censor terrorism-related information could force these businesses to err on the side of caution and take down information that might be offensive but would not lead to an imminent attack. In fact, an Internet service provider might well have taken down satirical cartoons of the kind Charlie Hebdo published.

Besides, even if Internet companies blocked videos and other propaganda produced by terrorist groups from their networks, that action would not necessarily prevent Europeans from finding that information. Terrorist sympathizers could access the banned content relatively easily by using virtual private networks or proxy servers that allow users in one country to pretend they are in a different country, like the United States, where free speech laws are much stronger. Some Europeans are already using such tools to access American services, like Netflix, that are not yet available in their countries.

Mr. Cameron's proposal raises another set of problems. In a speech earlier this week, he said he wanted companies like WhatsApp and Snapchat to create back doors in their services that would allow intelligence services to monitor conversations between users. If the companies refused to comply, he said, they should not be allowed to operate in Britain. Such an approach might seem reasonable to some — after all, the police can wiretap a landline phone, so why not a messaging service?

But technology and privacy advocates say it is dangerous to require technology companies to build such surveillance mechanisms into communications services because hackers and criminals will inevitably find ways to use those back doors to steal information from individuals, corporations and governments.

Mr. Cameron's proposal would make the Internet less secure without necessarily hampering terrorists. People who are determined to communicate with each other in secret can download encryption softwarefrom the Internet and send messages through systems like Tor that obscure their identities and locations.

Of course, governments can and should take steps to identify threats and prevent terrorist attacks through targeted intelligence gathering. But there is good reason to believe that widespread censorship and intrusive surveillance will only undermine personal freedoms and could even make us less secure

--
****
Juan
Power does not corrupt. Fear corrupts... perhaps the fear of a loss of power.
- -John Steinbeck
Posted by 1ma2t