Something to Know - 9 December

As this is being written, on the floor of the Senate, a long-awaited and controversial report, is being presented.   We've had enough heads-up and peeks as to what is is in the report.  The US facilities around the world are on alert to possible civil actions and protests.  The report details all of the atrocities and questionable, and illegal acts committed by our government in the wake of 9-11.   The head of the American Civil Liberties Union is requesting, in this article, that all of those involved (Rumsfeld, Tenet, Bush, Cheney, etc.) be pardoned by President Obama.  Yes, isn't this ironic?.   Upon first blush, I reacted with a cry of Bullshit!   However, in sober analysis, and several rereads, I agree.  Read this, and figure it out for yourself.   The only thing that I would ask is that we should let them all twist in the wind, and let this all soak in as to what we as a nation allowed to happen: (both formats)
http://www.nytimes.com/2014/12/09/opinion/pardon-bush-and-those-who-tortured.html?hp&action=click&pgtype=Homepage&module=c-column-top-span-region&region=c-column-top-span-region&WT.nav=c-column-top-span-region

Pardon Bush and Those Who Tortured 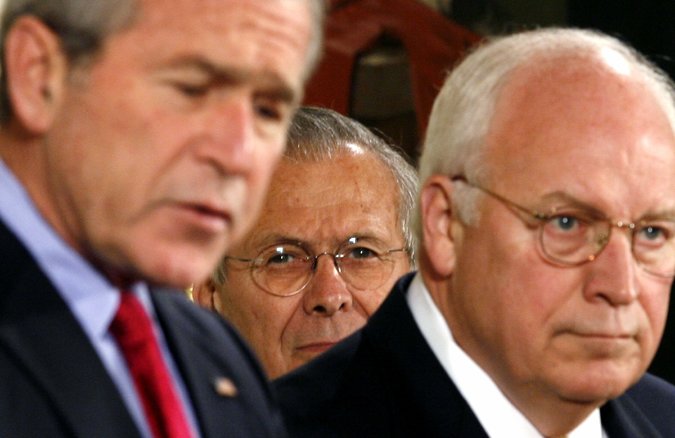 BEFORE President George W. Bush left office, a group of conservatives lobbied the White House to grant pardons to the officials who had planned and authorized the United States torture program. My organization, the American Civil Liberties Union, found the proposal repugnant. Along with eight other human rights groups, we sent a letter to Mr. Bush arguing that granting pardons would undermine the rule of law and prevent Americans from learning what had been done in their names.

But with the impending release of the report from the Senate Select Committee on Intelligence, I have come to think that President Obama should issue pardons, after all — because it may be the only way to establish, once and for all, that torture is illegal.

That officials at the highest levels of government authorized and ordered torture is not in dispute. Mr. Bush issued a secret order authorizing the C.I.A. to build secret prisons overseas. The C.I.A. requested authority to torture prisoners in those "black sites." The National Security Council approved the request. And the Justice Department drafted memos providing the brutal program with a veneer of legality.

My organization and others have spent 13 years arguing for accountability for these crimes. We have called for the appointment of a special prosecutor or the establishment of a truth and reconciliation commission, or both. But those calls have gone unheeded. And now, many of those responsible for torture can't be prosecuted because the statute of limitations has run out.

To his credit, Mr. Obama disavowed torture immediately after he took office, and his Justice Department withdrew the memorandums that had provided the foundation for the torture program. In a speech last year at the National Defense University, Mr. Obama said that "we compromised our basic values — by using torture to interrogate our enemies, and detaining individuals in a way that ran counter to the rule of law."

But neither he nor the Justice Department has shown any appetite for holding anyone accountable. When the department did conduct an investigation, it appeared not to have interviewed any of the prisoners who were tortured. And it repeatedly abused the "state secrets" privilege to derail cases brought by prisoners — including Americans who were tortured as "enemy combatants."

What is the difference between this — essentially granting tacit pardons for torture — and formally pardoning those who authorized torture? In both cases, those who tortured avoid accountability.

But with the tacit pardons, the president leaves open the very real possibility that officials will resurrect the torture policies in the future. Indeed, many former C.I.A. and other government officials continue to insist that waterboarding and other forms of torture were lawful. Were our military to capture a senior leader of the Islamic State who was believed to have valuable information, some members of Congress would no doubt demand that our interrogators use precisely the barbaric and illegal methods that the Obama administration has disavowed.

The Obama administration could still take measures to hold accountable the officials who authorized torture. Some of the statutes of limitations have run out, but not all of them have. And the release of the Senate's report provides a blueprint for criminal investigations, even if that's not what the intelligence committee set out to do.

CONTINUE READING THE MAIN STORYBut let's face it: Mr. Obama is not inclined to pursue prosecutions — no matter how great the outrage, at home or abroad, over the disclosures — because of the political fallout. He should therefore take ownership of this decision. He should acknowledge that the country's most senior officials authorized conduct that violated fundamental laws, and compromised our standing in the world as well as our security. If the choice is between a tacit pardon and a formal one, a formal one is better. An explicit pardon would lay down a marker, signaling to those considering torture in the future that they could be prosecuted.

Mr. Obama could pardon George J. Tenet for authorizing torture at the C.I.A.'s black sites overseas, Donald H. Rumsfeld for authorizing the use of torture at the Guantánamo Bay prison, David S. Addington, John C. Yoo andJay S. Bybee for crafting the legal cover for torture, and George W. Bush and Dick Cheney for overseeing it all.

While the idea of a pre-emptive pardon may seem novel, there is precedent. Presidents Abraham Lincoln and Andrew Johnson pardoned Confederate soldiers as a step toward unity and reconstruction after the Civil War. Gerald R. Ford pardoned Richard M. Nixon for the crimes of Watergate. Jimmy Carter pardoned Vietnam War draft resisters.

The spectacle of the president's granting pardons to torturers still makes my stomach turn. But doing so may be the only way to ensure that the American government never tortures again. Pardons would make clear that crimes were committed; that the individuals who authorized and committed torture were indeed criminals; and that future architects and perpetrators of torture should beware. Prosecutions would be preferable, but pardons may be the only viable and lasting way to close the Pandora's box of torture once and for all.