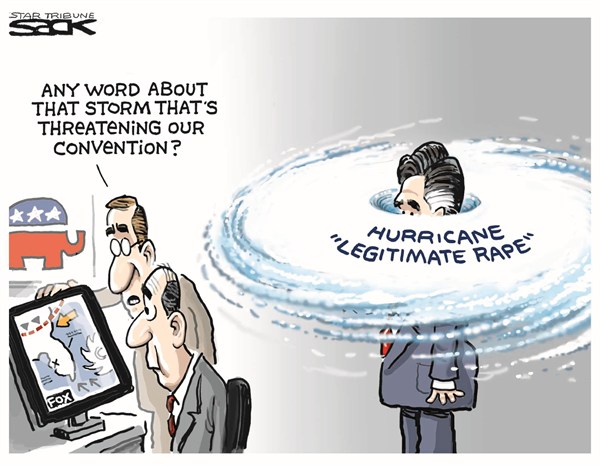 1.  Romney is going  to be challenged on many things.  Being secretive on his financials will inspire inquisitive journalists to ask on a bevy of subjects.  His inconsistencies on a variety of issues will provide a platform for questions all day and night long.  The emergence of his LDS faith as a topic will beg the question on all sorts of Mormon topics and his range of critical thinking, required for the presidency, will be challenged as his post as a bishop in the LDS is put along side many of the crazy and weird aphorisms and opinions by the apostles of twelve of the LDS and presidents come to light:
http://www.smirkingchimp.com/print/45153/
2.  Back to the Medicare issue and the distortions and fears that Romney and Ryan are injecting.   Their basic bottom line, is to get the government out of the medical care or concern business, and let a laissez faire insurance company be the middle men and brokers between patients and doctors, hospitals, and Big Pharma.  That is scary.  First of all insurance companies are a capitalistic venture and are required to make a profit, and the bigger profit the better.  The same with Big Pharma - another institution of profit making.  Without government regulation, people with prior existing conditions can and will be refused insurance coverage.  There is no incentive other than making profits bigger and better in this scenario.  As we have seen, deregulation of Wall Street was no good for our economy, and would have brought us to ruin if it was not for socialized bailout with taxpayer money.   Something that is so universal in need as medical care needs to be governed, administered, and regulated by the only system we know of that is fair for all and inclusive of every person who walks this land.  Private industry has proven that it is not capable or up to the task of something so large and complex as providing health care for all in an efficient and cost-effective manner.   There are just too many factors in health care that unregulated sectors fall victim to rent seeking shysters who fix the system to make sure that they can make as much money as possible.  Profit motives can and do lead to acts of cheating customers.   You name the industry, and there are examples of corrupt business practices.   Private industry has proven that it cannot reliably police itself:
http://www.thedailybeast.com/articles/2012/08/26/romney-and-ryan-are-peddling-fear-to-seniors-by-grossly-distorting-the-facts-on-medicare.print.html
3.  As Republicans dodge storm clouds and strong winds to settle into their convention in Tampa, on their ride from the airport to the various hotels, there are billboards in brilliant colors and tropical splash relaying the information ..."Welcome to Tampa, where the mayor and city council are all Democrats", and wishing the delegates a nice week.   This morning, the former Republican Governor of Florida, Charlie Crist has released this news bulletin, explaining why he is endorsing Barack Obama for re-election.  Y'all have a nice week:
http://www.tampabay.com/opinion/columns/former-gov-charlie-crist-heres-why-im-backing-barack-obama/1247631
4.  This article reinforces a conspiracy theory that I posited here about a month ago.  At that time, Romney was in a do or die situation where he could be dumped and be replaced, and as such was subjected to the bribe offer by the Koch Brothers.  An "investment of $100 million in Super Pac" support to the Romney campaign would be forthcoming if Paul Ryan were to be his VP pick.  Of course the highly-principled bishop of the Mormon Church was not fazed one bit.   He took the bribe and readily complied to keep alive his dream of being president.   So, in effect, the Koch guy is investing $100 million to achieve a possible $750 million eventual pay off.   This is the story line which drives screen plays for movies (see The Campaign):
http://www.rawstory.com/rs/2012/08/25/uygur-did-david-koch-buy-paul-ryan-the-vp-slot/
5.  There are going to be many competing issues going on inside and outside the Tampa convention hall.  The Romney security handlers are really nervous about the Ron Paul delegates and supporters.   To think that the 77-year old fans are just going to sit there and smile and wave at the appropriate times, is foolish.   There could be incidents and outbreaks of enthusiasm that will be embarrassing to the coronation process, and the Ron Paul folks will do so with glee - since they really do not like his Mittness.  It will be fun to watch.  I intend to watch MSNBC's coverage and Rachel Maddow will be on hand to make sure that nothing is missed - you betcha:
http://news.yahoo.com/gop-panel-ejects-maine-delegates-behind-paul-162815201.html
6.  The writer has been following Mitt Romney in his journalistic career.  He presents us with a light-heartedly serious look at the demonstrated leadership (or lack thereof) of a man who says that he is going to be "a leader".  His Elderness:
http://www.esquire.com/blogs/politics/mitt-romney-leadership-12009104?src=rss
7.  Chris Wallace of Fox News asks Romney some serious questions about his perceived tax evasion with Swiss bank accounts and Cayman Island banks.  Even his answers on this pro-Romney cable TV network are an insult to the average American voter:
http://www.youtube.com/watch?v=9oEkCqbtV24&feature=g-all-u
8.  What are now known of the Gawker documents, 950 pages of documented Bain & Company investments as they pertain to Mitt Romney, are now revealing a very complicated but possibly illegal interpretation of tax code law.   There appears to be a concerted effort to avoid paying taxes.  More information is coming out, and the only way that Romney can possibly survive is to laugh enough and unconvincingly make believe that he is honest.  Be prepared for someone to drop copies of his unauthorized release of tax returns.  Then, it will really be interesting:
http://veracitystew.com/2012/08/26/romney-docs-reveal-potentially-illegal-tax-dodging-schemes/#

9.  The NY Times editorial board is looking at the GOP ticket, and has come to the conclusion that Mitt Romney is nothing more than a figure head - that little plastic emoticom that stiffly morphs from issue to issue.  Ryan is the face and the ideology of the new right-wing take over of the party, and for whom American should be vary cautious and wary of:
http://www.nytimes.com/2012/08/27/opinion/paul-ryans-social-extremism.html?_r=1&ref=opinion&pagewanted=print
10.  Doyle McManus sees the campaign's biggest audience focus is on the economy vs. Medicare, at least for seniors.  There are plenty of distracting and competing issues, but Medicare is the biggie, and obfuscation by Romney is having some effect, but he's probably not comfortable at all with what Ryan brings with him on the subject:
http://www.latimes.com/news/opinion/commentary/la-oe-mcmanus-column-hochul-congressional-race-20120826,0,4983367,print.column
--
Juan

"Advice to writers: Sometimes you just have to stop writing. Even before you begin."
-- Stanislaw J. Lec
"It was enough to make a body ashamed of the human race."
-- Mark Twain
"The big thieves hang the little ones."
-- Czech Proverb
"Honest criticism is hard to take, particularly from a relative, a friend, an acquaintance, or a stranger."
-- Franklin P. Jones
"If you reject the food, ignore the customs, fear the religion and avoid the people, you might better stay home."
-- James Michner
Posted by 1ma2t