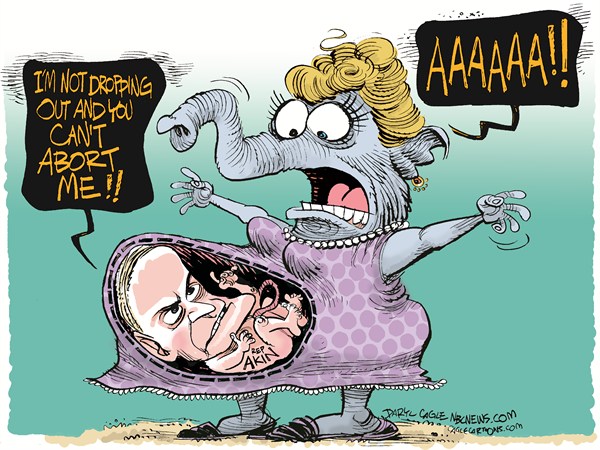 1.  As the GOP vs. Todd Akin spectacle continues, one has to wonder if we are not witnessing the beginning of the implosion of the Republican Party.  Why is it that Akin's expressed views, that are considered "unfortunate choice of words" to "indefensible and wrong" be any different from the demonstrated voting history of his fellow GOP detractors?   It is really comical to see people running away from something that they have been doing all along.  The upcoming GOP convention in Tampa is working hard to be the coronation of Mitt Romney - two guys who have been hoping for Akin to disappear, but whose own views on women and abortion are the same.  The GOP platform on abortion and access to women's health issues that governor ultra-sound guided, reflect an extremely harsh position.  Ron Paul and his supporters will be there at the circus, as well as Akin fans, as well as an underlying current of Tea People who could and would go viral to show Mitt that they don't like him.  There will be an unbelievable army of warriors running around to tamp down the lid, or suppress anything that smacks of disloyalty to Mitt or any other embarrassing  displays.   The GOP is so far to the right, that moderates just might provoke a reaction by indicating their lack of enthusiasm:
http://www.washingtonpost.com/politics/akin-says-hell-stay-in-senate-race-heightening-tension-within-gop/2012/08/21/19912b60-ebaf-11e1-b811-09036bcb182b_print.html
2.  This article concentrates on the argument that RomRyan is trying to pull over our eyes - "Obama is taking $716 Billion out of Medicare and taking that hard-earned cash that you have put in for YOUR medical plan, and is taking it to finance Obama care -an unproven big-government program".  In other words, Medicare is being robbed to set up Obama Care - seeing that Obama care is for an other class of people who are not like you.  Rather than look at it honestly - that the $716 is the figure that is realized by savings and efficiency and using that to support a program that put tens of millions into a system that allows them to receive proper medical attention.  The RomRyan plan uses that same $716 Billion in realized savings, but wants to basically use that to support increased tax breaks for the wealthy.  If it becomes difficult to comprehend - guide yourself with the aphorism that you should not trust the party that never wanted Social Security or Medicare in the first place:
http://www.nationalmemo.com/mitts-most-shameless-lie/?utm_source=sendgrid.com&utm_medium=email&utm_campaign=website
3.  This is a Democratic Super Pac political ad.  Rather than smear or distort a specific candidate, it goes after the Financiers of the Republican Super Pac - in this case - the Koch Brothers.  It is a simple lesson in business - you invest $400 million to get what you want:
http://www.nationalmemo.com/watch-liberal-group-goes-after-koch-brothers/?utm_source=sendgrid.com&utm_medium=email&utm_campaign=website
4.  In Massachusetts, the senate race between Elizabeth Warren and Scott Brown is emblematic of what the Republican party is facing.  Brown is doing everything he can to run away from Romney, Ryan, Akin, and the rest of the Republican party.   The GOP is obviously a toxic label.  Lizzie is doing the best she can to tie Brown with the rest of the extremists.  This highlights the real problem with the Republicans -they are so far to the right with their extreme views that there is no room for moderates, and it is so bad that it is a real time embarrassment that plays out right on the center of the stage:
http://www.nytimes.com/2012/08/22/us/politics/scott-brown-plays-down-republican-label-in-massachusetts.html?_r=1&nl=us&emc=edit_cn_20120822&pagewanted=print
5.  All the news articles and tid bits from the various media sources are just buried deeply with the Akin/GOP mess.  So, let's just drop it here with this story about how most questions and directions of conversations will inevitably wind up around the necks of RomRyan:
http://www.washingtonpost.com/opinions/dana-milbank-paul-ryans-legitimate-problem/2012/08/22/821dfe52-eca8-11e1-a80b-9f898562d010_print.html
6.  When it comes to music that is popular with the younger generation (hell, anybody born after 1960, I guess), the Republicans in trying to appear "hip" just strike out big time.  The bits of music that various GOP candidates have co-opted from various musical groups have been strenuously rejected.  Seems as though each musical group or star has expressed very strong distaste for the candidates' policy, personality, or political views, and do not want any association with them:
http://www.latimes.com/news/politics/la-pn-twisted-sister-opposes-ryans-use-of-were-not-gonna-take-it-20120822,0,624302.story
7.  Three days ago, I Kindle downloaded The Jungle by Upton Sinclair.  It is the muckraking story of the Chicago stockyards about a hundred years ago, and the oppressive and filthy work conditions of turning animal stock into meat products.  So, here we are today, reading about some of the same unhealthy food processing, and it even includes one of my favorite burger joints.   As bad as it is, you have to wonder what it would be like if the Libertarians succeded and were able to get rid of the FDA and Department of Agriculture:
http://www.latimes.com/news/local/la-me-0822-slaughterhouse-20120822,0,1444137.story
8.  Pack 'em in, board 'em up, fly 'em out......Raw Hide.  Okay, you fat asses, listen up:
http://www.latimes.com/business/la-fi-united-seats-20120823,0,615282,print.story

9.  Doyle McManus does not hold out any hope that the election will change much.  Come January of 2013, the same gridlock will face whoever wins, in his opinion.   Personally, I hold out hope that the Democrats will take control of both houses of Congress, and we can finally get this show on the road again:
http://www.latimes.com/news/opinion/commentary/la-oe-mcmanus-column-election-outcome-20120823,0,4993031,print.column
--
Juan

"Wisdom doesn't automatically come with old age. Nothing does - except wrinkles. It's true, some wines improve with age. But only if the grapes were good in the first place."
-- Abigail Van Buren
"The only thing that makes life possible is permanent, intolerable uncertainty; not knowing what comes next."
-- Ursula K. LeGuin
"You must learn from the mistakes of others. You can't possibly live long enough to make them all yourself."
-- Sam Levenson
"Nothing ever goes away."
-- Barry Commoner
"One of the first duties of the physician is to educate the masses not to take medicine."
-- Sir William Osler
Posted by 1ma2t