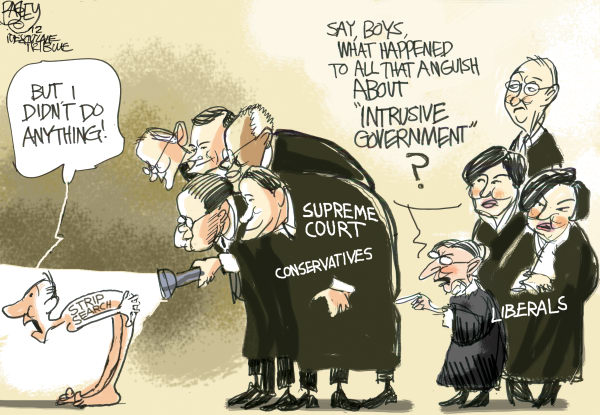 1.  A refreshing story in the midst of all the swirl and angst of gender issues.  The president of Harvey Mudd College, a school just down the street from my home, is a woman with a great program of allowing more women into the field of science and engineering, and has changed the landscape of the five Claremont Colleges for the better:
http://www.nytimes.com/2012/04/03/science/giving-women-the-access-code.html?_r=1&nl=todaysheadlines&emc=edit_th_20120403&pagewanted=print

2.  It's not possible to give you a link to this, so it presented in Full Monty:

WASHINGTON (The Borowitz Report) – In a stunning decision on the future of healthcare in America, the Supreme Court decided today that annual physicals were unconstitutional and should be replaced by random strip searches conducted by the nation's police.

The decision, which appeared to expand the role of the police to include such duties as performing breast and prostate exams, took many in both the healthcare and law enforcement communities by surprise.

Writing for the majority, Justice Antonin Scalia wrote, "While the Constitution makes no provisions for healthcare, it explicitly defends the people's right to form militias; clearly, the Founders believed that if anyone should be looking up our asses it shouldn't be a doctor, but someone with a gun."

By replacing annual checkups with random strip searches, the Court raised worries in the healthcare community that patients would not get the care they need, but those concerns were brushed aside by Justice Samuel Alito.

"Ultimately, the responsibility to secure adequate medical attention falls to the citizen," he said.  "When a policeman is searching his body cavities, for example, it's up to the citizen to say, 'There's a mole I'd like you to look at.'"

Justice Clarence Thomas wrote that he was personally ready for a random strip search/exam at any moment, adding, "I've got nothing on under this robe."

3.  The Wannabees all invoke Ronald Reagan in their campaigns. The trouble is, the Gipper and his agenda and positions could not get nominated in the caustic trend of today's GeeOpee:
http://hosted.ap.org/dynamic/stories/U/US_OBAMA?SITE=FLTAM&SECTION=US&TEMPLATE=DEFAULT&CTIME=2012-04-03-13-41-20

4.  The campaign from the Democrats and Obama has now officially started.  Obama calls out the GeeOpee on many issues:
http://www.nytimes.com/2012/04/04/opinion/calling-radicalism-by-its-name.html?ref=opinion&pagewanted=print

5.  Maureen Dowd has no love for the 5 guys on the Supreme Court, and she has good reason:
http://www.nytimes.com/2012/04/04/opinion/dowd-men-in-black.html?ref=opinion&pagewanted=print

6.  Rick Santorum has absolutely no legitimate claim to be running for any public office.  He has constantly spouts falsehoods, for whatever reason.  This documented claim that the UC University system does not teach U.S. History is his latest.   Does he actually believe that we believe his goofy dribble?   Just go online to any UC system and check the course offerings.   Santorum is just one reason the Wannabees     slate is so weak and undeserving:
http://www.huffingtonpost.com/2012/04/03/rick-santorum-college-university_n_1399412.html?ncid=edlinkusaolp00000003

7.  For all of you experienced air travelers, there await for you a "new and innovative experience in air travel" on Allegiant Airlines.  I think the marketing director used to Dick Cheney Happy Face stickers:
http://www.latimes.com/business/money/la-fi-mo-allegiant-fee-20120403,0,5710843.story

8.  Forget Iran, Al Quaeda, Swine and Bird Flu, and Restless Legs.   The biggest problem we have in this country is the continuing effort of Dumming Down.   Tennessee is at it again - 87 years later:
http://www.latimes.com/news/opinion/opinionla/la-ed-evolution-discovery-tennessee-20120401,0,6336146,print.story

"It is forbidden to kill; therefore all murderers are punished unless they kill in large numbers and to the sound of trumpets."
-- Voltaire
"Things are more like they are now than they ever were before."
-- Dwight D. Eisenhower
"Behind the phony tinsel of Hollywood lies the real tinsel."
-- Oscar Levant
"I detest life-insurance agents; they always argue that I shall some day die, which is not so."
-- Stephen Leacock
Posted by 1ma2t