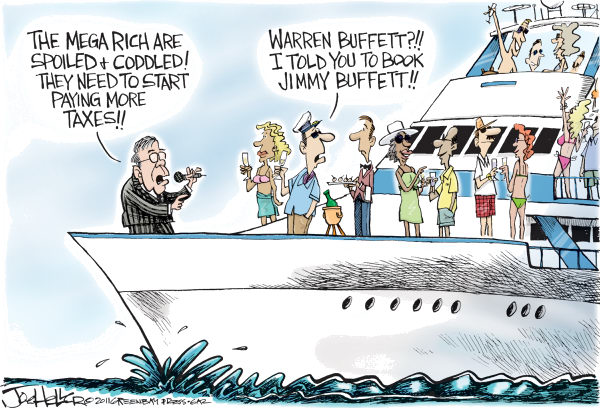 1.  Corporations which (notice that it is "which"...not "who" - they are not people)......manufacture products for human consumption, are not very happy about regulations that warn the buyer about health and safety concerns.   In fact, there is a case to be ruled upon where Big Corp is whining about 1st Amendment Rights, etc.   Anyway, this article refers to the tobacco industry railing against graphic images that display the horrors of smoking.   As it rolls along, it will be seen how effective the lobbyist money works on our elected officials:
http://www.nytimes.com/2012/04/10/opinion/bogus-challenge-to-cigarette-warnings.html?_r=1&nl=todaysheadlines&emc=edit_th_20120410&pagewanted=print
2.  In response to any claims that corporate America is paying too much in taxes:
http://truth-out.org/news/item/8432-twenty-six-major-corporations-paid-no-corporate-income-tax-for-the-last-four-years-despite-making-billions-in-profits?tmpl=component&print=1
3.  Thom Hartman and his easy presentation of stuff that I am too lazy to do myself:
http://truth-out.org/news/item/8450-on-the-news-with-thom-hartmann-bill-gates-is-latest-donor-to-alec-to-jump-ship-and-more
4.  The Washington Post observes that Romney is outsourcing the Women Issue to his wife, and hope is works.  Ruth Marcus is calling him out on that, and letting him know that it will not work:
http://www.washingtonpost.com/opinions/mitt-romney-cant-leave-women-voters-to-his-wife/2012/04/10/gIQASoB88S_print.html
5.  To be out of the corporate world, I sure have missed some stuff.   I give you this story because I did not realize that employers have been/or actually asking prospective employees for their social media applications and passwords to judge the content of their character.  How invasive is that?   I don't thank that is legal or right.  You be the judge:
http://www.latimes.com/business/technology/la-fi-tn-facebook-password-employers-maryland-bill-20120410,0,6280495.storyml
6.  For my retired and soon-to-be retired teacher friends, an article on other collateral damage from the Wall Street collapse:
http://www.latimes.com/business/la-fi-calstrs-20120411,0,1723529,print.story
7.  To Thomas Friedman, the best running strategy slogan that Obama can use in his campaign, is the same one that the GeeOpee nominee seems to be using:  "I'm not Mitt Romney":
http://www.nytimes.com/2012/04/11/opinion/friedman-im-not-mitt-romney.html?_r=1&hp
8.  In order to get a better understanding on the price of gasoline, jet fuel, and diesel fuel, it helps to understand the Big Casino effect of speculators who buy and trade oil futures and stocks.   All the drilling that goes on each day produces roughly 85 million barrels a day.  The speculators, who are like poker players sitting around a table, trade (buy and sell) the rights to the oil that is produced at about 1 Billion barrels a day.  The poker playing antics of the speculators add about 40% to the cost of oil.   There is something wrong about all of this, and don't just let be explained by saying that it is free enterprise capitalism, because if if it is, there is something really wrong:
http://www.nytimes.com/2012/04/11/opinion/ban-pure-speculators-of-oil-futures.html?ref=opinion&pagewanted=print
--
Juan

"If your parents never had children, chances are... neither will you."

"An economist is a surgeon with an excellent scalpel and a rough-edged lancet, who operates beautifully on the dead and tortures the living."
-- Nicholas Chamfort
"There are painters who transform the sun to a yellow spot, but there are others who with the help of their art and their intelligence, transform a yellow spot into the sun."
-- Pablo Picasso
"You probably wouldn't worry about what people think of you if you could know how seldom they do."
-- Olin Miller
"Until you walk a mile in another man's moccasins you can't imagine the smell."
-- Robert Byrne
Posted by 1ma2t