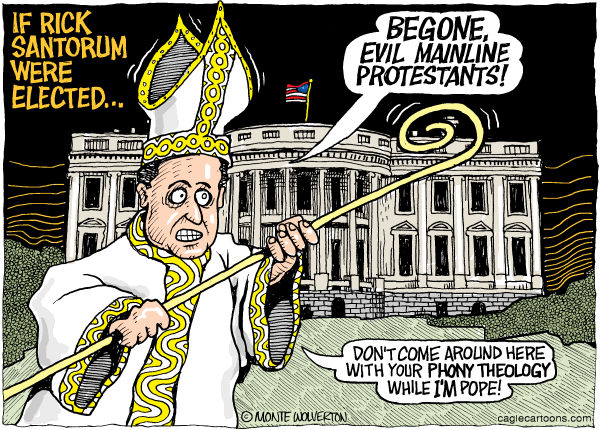 1.  There is a lot of buzz and interest, and deservedly so, for the NY Nicks sensation - Jeremy Lin.    He does not fit the stereotypical mold of NBA employees.  I can hardly wait for the emergence of an ex-roofer from the Yucatan Peninsula of Mexico to make it big as the point guard with the Lakers.
http://www.nytimes.com/2012/02/20/business/media/jeremy-lin-media-hype-stumbles-on-race.html?_r=1&src=dayp&pagewanted=print

2.  Now that Sanitorium is on the top of the list, stuff is starting to emerge on him. The front-runner gets his backside exposed, and does he ever have a load that he has left behind:
http://www.thedailybeast.com/articles/2012/02/20/10-outrageous-things-rick-santorum-has-said.html

3.  The Koch Brothers are admitting full complicity in funding Wisconsin's Governor Scott Walker's effort to "bust the unions".   The use of oil profits at its finest glory:
http://www.thenation.com/blog/166385/david-koch-admits-big-spending-help-scott-walker-bust-union-power

5.  A very good look at the "trickle-down" theory, and all of its misconceptions and false advertising:
http://www.truth-out.org/print/12763

6.  Michael Gerson of the Washington Post is a right-of-center op-ed writer.   So, his message excoriates his Wannabees for their absolutely off message discipline, which is allowing Obama to skate free.   Santorum's wild off-track escapades into areas which are disastrous are an example:
http://www.washingtonpost.com/opinions/republicans-are-making-it-easy-for-obama/2012/02/20/gIQAD5P8PR_print.html

7.  David Brooks has written a column which is sure to be passed around the circles of sociology and psychology classes and other discussion groups.  It touches on the need for social skills in adapting to the apparent new society where people go in and out of groups and relationship (the New Talent).  It also mentions the social structure that is now fading away that would allow those with no discernible skills to cope:
http://www.nytimes.com/2012/02/21/opinion/brooks-the-talent-society.html?_r=1&ref=opinion&pagewanted=print

8.  This NY Times editorial is about the immigration reform issue and what the GeeOpee wannabees are not going to talk about:
http://www.nytimes.com/2012/02/21/opinion/immigration-and-the-2012-campaign.html?ref=opinion&pagewanted=print

9.  Here is a very interesting exchange about health care issues between two people who agreed to correspond - one a Conservative, and the other a Liberal:
http://opinion.latimes.com/opinionla/2012/02/conservative-vs-liberal-healthcare.html

"War is a cowardly escape from the problems of peace."
-- Thomas Mann
"Never go out to meet trouble. If you will just sit still, nine cases out of ten someone will intercept it before it reaches you."
-- Calvin Coolidge
"Golf and sex are about the only things you can enjoy without being good at."
-- Jimmy Demaret
"Drama is life with the dull bits cut out."
-- Alfred Hitchcock
Posted by 1ma2t