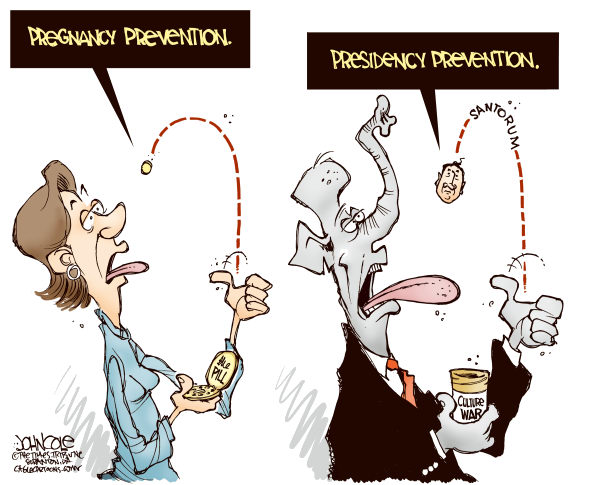 1.  Filling up at the pump has gone screwy wild again.  The GeeOpee is going to start harping that Obama's lack drilling and Pipeline is causing it.  Nahh,,,na.   Seems as though it is is the same nasty free-market speculators that are at it again:
http://thinkprogress.org/green/2011/04/13/174989/sachs-speculators-gas-prices/

2.  Oohhhh.  The mortgage-back security market is back in business.   Be careful out there.  Is anyone watching our backs?:
http://www.truth-out.org/print/12753

3.  It is utterly disgusting, immoral, and wrong to the lengths that Republicans in many states go to suppress the rights of voters.  Realizing that they are outnumbered, and in declining favor, their only way to hold on is to rig who cannot vote.  The Constitution specifies who can vote, and all the GeeOpee can do is figure out crappy little laws to prevent people from voting:
http://www.truth-out.org/print/12755

4.  E.J. Dione is on the subject of the hypocrisy that envelops the the conservative wing (right wing?) babble with the action it demonstrates:
http://www.washingtonpost.com/opinions/ideological-hypocrites/2012/02/17/gIQAlrAGOR_print.html

5.  Many, many months ago, Julian Assange and WikiLeaks was the center of angst and attention by government officials all over the world and the media. Bill Keller, who was the NY Times Editor at the time, fills us in on where matters stand now:
http://www.nytimes.com/2012/02/20/opinion/keller-wikileaks-a-postscript.html?_r=1&ref=opinion&pagewanted=print

6.  Paul Krugman has a "gotta read" article on the perils of following the path of austerity to shape up the economic situation.  Cutting back spending, particularly in areas that support jobs and the social structure support system, have done the Euro Zone countries in trouble on good.   Enough of the slash the budget and balance the budget by severe cuts in necessary spending.  There is proof today that it does not work, as it did not work for Herbert Hoover:
http://www.nytimes.com/2012/02/20/opinion/krugman-pain-without-gain.html?ref=opinion&pagewanted=print

7.  San Torem barks out the usual right-of-center spiel, but his tilt to his interpretation of religious dogma is inappropriate,wrong, and dangerous for one seeking the office of the presidency:
http://loyalopposition.blogs.nytimes.com/2012/02/20/rick-santorum-and-the-politics-of-theology/?pagemode=print

8.  Two non-citizen Vietnam war veterans join in protest on the actions to have them and others like them deported:
http://www.latimes.com/news/local/la-me-deported-veteran-20120218,0,891231,print.story


"There's a great power in words, if you don't hitch too many of them together."
-- Josh Bolling

"Human history becomes more and more a race between education and catastrophe."
-- H. G. Wells
"If you are not criticized, you may not be doing much."
-- Donald H. Rumsfeld
"You get fifteen democrats in a room, and you get twenty opinions."
-- Senator Patrick Leahy
"Eternal nothingness is fine if you happen to be dressed for it."
-- Woody Allen