Something to Know - 15 November

The mid-term voting has been completed.   Surprise - Surprise!  The counting of the votes is still going on, and will be for a while before the final certifications are complete, but enough evidence is in.   No need to detail what the results show so far - the media is full of actual results and plenty of conjecture.  The MAGA folks in the House could gum up the with a majority so that Jim Jordan and other MAGGOTS, in heading up all the committees, could do nothing more than investigate, subpoena, and use this space in time to enact a siege of revenge - and do absolutely nothing to solve any problems.   Biden can veto anything that the MAGGOTS come up with, so it is safe to say that the President and the Senate will counter and deny any GOP misadventures.   So?   We may be in for a possible 2-years of stagnation.   Anything is possible, even a cross-over of enough Republicans on to the Democrat's side of the aisle to effectively work on things we really need.   It's all speculation right now.   What needs to be settled is where Trump ends up.    He has rumored that he might make a big announcement tonight.   The trashiest, most undignified, and effectively dangerous chief executive we have ever had, who is now under the cloud of extensive and serious legal problems, will be exhibiting the extent of his psychotic narcissistic personality disorder.   Paul Krugman knows what we will be witnessing:

Trump Is Weak, but the G.O.P. Is Weaker 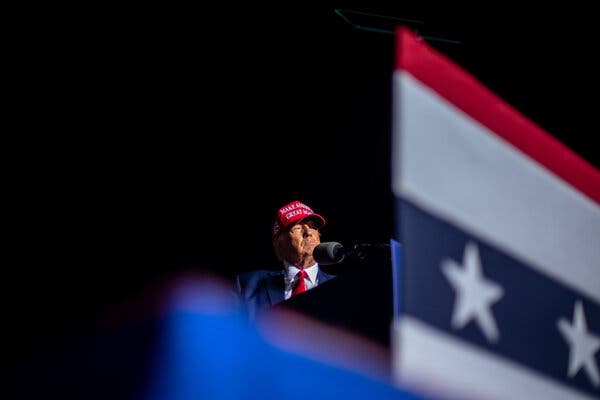 After their party's disappointing performance in the midterms, Republican elites seem to have decided that Donald Trump is their big problem. The Murdoch media empire has been trashing the former president. Many donors and operatives are reportedly rallying around Gov. Ron DeSantis of Florida. But Trump, who is widely expected to announce his 2024 presidential campaign on Tuesday, won't go quietly.

Will Trump secure the nomination despite elite qualms? If he doesn't, will a man who has never shown any loyalty to his party or, for that matter, anyone but himself, sabotage the G.O.P. out of spite? I don't know more than anyone else who follows the news.

Let's talk instead about how remarkable it is that someone like Trump managed to dominate one of America's two major political parties and surely retains a substantial base.

I'm not talking about the fact that Trump holds what I consider reprehensible policy views or even the fact that he engaged in several acts, including an attempt to overturn a national election, that can reasonably be described as seditious. Clearly, most of the G.O.P. is OK with all of that.

I'm talking instead about the evident perception by many Republicans that Trump is a strong leader, when he is in reality extraordinarily weak.

Start with personal character — not my favorite subject (I'm much more comfortable talking about policy), but something that clearly matters when you're choosing a commander in chief.

I don't think it's romanticizing the past to say that once upon a time politicians who sought the presidency had to appear, well, presidential. That is, they had to display gravitas and dignity; whatever their behavior behind closed doors, in public they had to appear mature and self-controlled.

Trump, however, comes across as 76 going on a very bratty 14. He veers, sometimes in consecutive sentences, between cringeworthy boasting (what kind of person describes himself as a stable genius?) and whining, between bombast and self-pity.

Beyond personal affect, what stands out about Trump's time in office is his weakness, his inability to get things done.

On domestic policy, Trump ran in 2016 as a different kind of Republican, one who would break with the party's tax-cutting, anti-government orthodoxy. Once in the White House, however, he was putty in Mitch McConnell's hands. His only major domestic policy initiatives were a failed attempt to repeal Obamacare and a standard-issue G.O.P. tax cut for corporations and the wealthy.

What about his promises to invest in infrastructure? Nothing came of them: "It's Infrastructure Week!" became a running joke.

On foreign policy, North Korea's Kim Jong-un played Trump for a fool with empty reassurances about denuclearization. China's Xi Jinping did much the same over trade, getting Trump to pause his tariff hikes in return for a promise to buy U.S. goods that proved entirely empty.

In short, Trump's performance in office was feeble — especially compared with that of his successor.

President Biden didn't get everything he wanted on domestic policy, but he did get a major infrastructure bill and, in the Inflation Reduction Act, both unprecedented spending to fight climate change and a significant strengthening of health care. And Democrats' unexpectedly strong showing in the midterms probably ensures that these policy successes will endure.

Overseas, Biden assembled and held together a coalition in support of Ukraine that has enabled the invaded nation to resist Russia's attack — a huge foreign-policy success reminiscent of America's pre-Pearl Harbor role as the "arsenal of democracy." And Biden's China policy, centering on export restrictions designed to undermine China's technological ambitions, is vastly more aggressive than anything Trump did, even if it hasn't gotten nearly as much media attention.

Yet Biden is often portrayed as weak and out of it, while Trump was perceived by 90 percent of Republicans as a "strong leader" on the day he grudgingly left office. How is this possible?

The Trump personality cult may have been enabled in part by forces that go beyond politics. After all, we used to expect dignified behavior from captains of industry as well as politicians. But these days, perhaps because celebrity culture infects everything, business leaders are taken seriously even when they seem unable to refrain from flamboyant displays of ego and insecurity. (Cough. Elon Musk. Cough.)

Also, the Republican elites trying to distance themselves from Trump spent years fluffing his image. Until a few days ago Fox News, the main source of political information for much of the G.O.P. base, gave Trump the kind of hagiographic coverage you'd expect from state media in a dictatorship.

And Republican politicians, many of whom knew Trump for what he was, spent years praising him in language reminiscent of Politburo members praising the party chairman.

Now those same elites want to push Trump out of the picture. But while they may be able to deny him the nomination, they probably won't be able to avoid paying a heavy price for their past cowardice.
--
****
Juan
"I was thinking about how people seem to read the bible a lot more as they get older, and then itdawned on me—they're cramming for their final exam."- George Carlin
Posted by 1ma2t