Something to Know - 9 October

Two items this morning.  The first is from HCR, and her presentation on the political atmosphere after the civil war, which explains much of our problems of today.   And then, Maureen Dowd of the NY Times puts the Donald and Herschel comedy team on stage:

Donald and Herschel: The Unholy Alliance 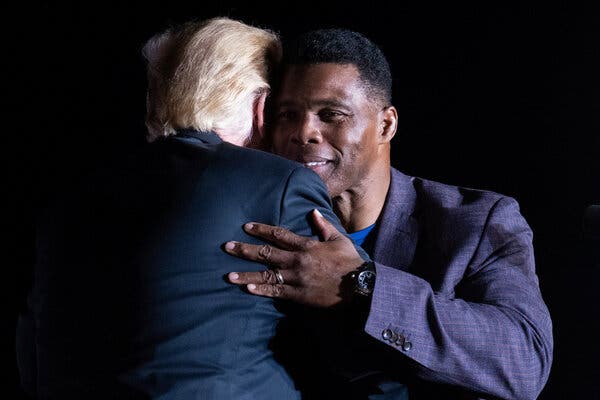 WASHINGTON — This will sound quaint.

In May 2016, The Washington Post ran the story of how Donald Trump, in his real estate days, would call reporters, pretending to be his own spokesman, to brag and leak nuggets about nonexistent romances with famous women. I thought that would knock him out of the race.
The story hit on a Friday, so I scrambled to rewrite my column on the assumption that Trump wouldn't last the weekend.
But the scoop didn't make a dent.
The next day, The Times splashed a piece on the front page reporting that dozens of women had accused Trump of "unwelcome romantic advances" and lewd and "unending commentary on the female form."
Again, he emerged unscathed with his base.
I still didn't learn my lesson, though. That October, when the "Access Hollywood" tape showed Trump yucking it up about kissing, groping and trying to have sex with women, noting that "when you're a star, they let you do it," I once more figured he couldn't survive as leader of the party of "family values" and the religious right.


He could.
Once, there were limits, things that could disqualify you from office, especially in the party that claimed a special relationship with Jesus.
But those limits don't exist anymore.
Conservatives have sacrificed any claim to principle. In an unholy transaction, they stuck with Trump because there was a Supreme Court seat and they were willing to tolerate his moral void in order to hijack the court. They didn't care how he treated women as long as he gave them the opportunity to rip away rights from women. They wanted to impose their warped morality, a "Handmaid's Tale" world, on the rest of us.
Christian-right leaders made clear that, no matter what Trump said or did to women, he was preferable to Hillary Clinton, who supported abortion rights.
As Jerry Falwell Jr. said at the time, "We're never going to have a perfect candidate unless Jesus Christ is on the ballot," noting, "We're all sinners."
Well, Falwell certainly was. Four years later, he was ousted from running Liberty University after a sex scandal of his own.

Now, in Georgia, conservatives are turning a blind eye to sordid stories coming out about Herschel Walker, who demonstrates no qualifications for serving in the Senate. His sole credential is that he was once excellent at carrying a football.
Story after story has emerged about reprehensible behavior and lies concerning women and children, and about falsifying his personal history.
The Daily Beast asserted that while Walker wants to completely ban abortion, even in cases of rape, incest and the life of the mother, comparing it to murder, he paid for a girlfriend's abortion in 2009. Walker has called the story "a flat-out lie," but The Beast talked to the unnamed woman and checked her financial records. She said she was just sick of the hypocrisy. Even his conservative influencer son, Christian, disparaged his father's "lies" on Twitter.
On Friday, The Times published a story confirming The Daily Beast's reporting, and in a startling development added that in 2011, Herschel pressured the same woman to have another abortion. They ended their relationship when she refused; she had their son, now 10.
There's more: His ex-wife claimed he pointed a pistol at her head and told her he was going to blow her brains out; he has four children with four different women, but hadn't publicly acknowledged three of them. His 10-year-old was one of those hidden.

Mitch McConnell and his fellow Republicans should be ashamed to promote this troubled person for their own benefit.
Privately, some Republicans are mortified by the Walker spiral, but they're going to brazen it out for the win.

Dana Loesch, the right-wing radio host, was blunt: "I don't care if Herschel Walker paid to abort endangered baby eagles. I want control of the Senate."
Republicans have exposed their willingness to accept anything to get power that they then abuse. As Lindsey Graham said out loud, with his fellow Republicans shushing him, they want a nationwide ban on abortion after 15 weeks. And Herschel Walker is key to that.
Trump got to know Walker when he bought the New Jersey Generals in 1983, which Walker had joined after he won the Heisman Trophy and dropped out of the University of Georgia to turn pro.
"In a lot of ways, Mr. Trump became a mentor to me," Walker wrote in his memoir in 2008, "and I modeled myself and my business practices after him." Trump led the cry "Run, Herschel, run!"
Walker takes after his mentor with his lies, hypocrisy and know-nothingness on issues. Still worse, he's following his mentor by denying his transgressions as a womanizer, even as he tries to smash women's rights.