Yesterday, it was hot here in Claremont, and today is going to be even hotter (103+), so here is the news for today, plus HCR.  I need to go to the library, get a book and run back to the coolness of a fan working overtime. 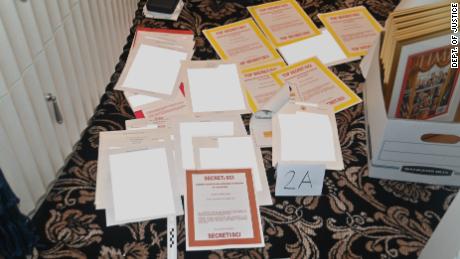 (CNN)Donald Trump's scattershot defense in the weeks since FBI agents descended on his Mar-a-Lago resort has only exposed the depth of the mess he faces over his refusal to return classified documents that led to an unprecedented search of an ex-president's home.

HAPPENING TODAY
As he keeps inadvertently giving the Justice Department new openings, there are also signs that the fast-expanding drain on Trump's time and focus is having a political impact as he considers delaying his timeline for the launch of a likely 2024 White House bid, as CNN's Gabby Orr and Kristen Holmes reported Wednesday.
But Trump is not done with the time-honored strategy of delaying, distorting and trying to tie the legal system up in knots, which has throughout his life in business and politics often succeeded in postponing or preventing accountability.
In a legal filing on Wednesday laced with trademark chutzpah ahead of a critical new court hearing in Florida, Trump ditched a core argument he's made for days -- that he had already declassified documents found on his property.
In a head-spinning pivot, Trump's legal team effectively argued that no one should be shocked he had classified documents at his home -- he was once president, after all.
"Simply put, the notion that Presidential records would contain sensitive information should have never been cause for alarm," the filing said.
The bald-faced statement was a classic Trumpian tactic. It recalled the ex-President's insistence that an official account of a conversation in which he self-evidently coerced the president of Ukraine to investigate Joe Biden with the promise of military aid was, on the contrary, evidence of "a perfect call." 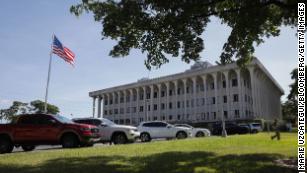 What to watch for at Thursday's hearing in Trump's bid for a special master over documents seized at Mar-a-Lago
Trump's approach immediately gives his supporters in the GOP and on conservative media new material to muddy the waters, distort the case against him and accuse the DOJ and the FBI of political motives.
Enter your email to sign up for CNN's "What Matters" Newsletter.
close dialog
But he did not address the core questions swirling around him in the documents case. These include: why did a former president need material, some bearing the highest designations of classification in the intelligence community? And why did he keep material that could potentially damage national security and endanger US agents overseas in insecure locations in his heavily visited resort?
And he also ignored a fundamental principle underlying the Justice Department investigation: According to US law, the papers of former presidents do not belong to the individual who once sat in the Oval Office. They belong to the nation and should be in the custody of the National Archives -- an agency that made exhaustive efforts to retrieve Trump's haul before turning to the Justice Department.
Often Trump's political and legal strategies cross-pollinate. This was highly successful in the case of the Ukraine call, which led to his first impeachment, although he avoided conviction in the Senate, which could have removed him from office. The complication here, however, is that Trump is facing not political scrutiny but the judgment of the law. And recent days suggest that he's deeply exposed -- not least because of a scathing Justice Department filing on Tuesday that obliterated many of his previous defenses and raised the possibility that Trump and his lawyers could face obstruction charges.
Still Trump's Wednesday filing, in support of his call for the appointment of an independent official known as a special master to work out whether the FBI took legally privileged documents from his home, could still work for him in the short term. If a judge agrees with his expansive definition of the role, Trump could throw a stick in the spokes of the investigation. He might be able to launch court challenges rooted in legal and executive privilege claims that could be frivolous but would take time to work through the system. And he could challenge the Presidential Records Act through various and exhaustive levels of the legal system. A hearing on Trump's request is set for 1 p.m. ET Thursday.
If he can push the investigation deep into 2023 and possibly beyond, it could conflict with the presidential campaign and help Trump portray the episode as a politicized effort by the Biden administration to thwart his return to the White House. And he could once more frustrate political opponents desperate to see him quickly pay a price for his refusal to observe presidential norms and constant challenges to the rule of law.
This is one reason why the DOJ urged the judge to equip any special master she appoints with exceedingly limited guidelines for operation.
In itself, a special master is not an unreasonable request in such a case, according to legal experts, though the curiosity here is that Trump waited until the government had documents it took from Mar-a-Lago for two weeks to make it.
"If the government's case is as they think it is, let's just play it straight, let a special master come in," David Schoen, Trump's lawyer from his second impeachment trial, said on CNN's "New Day" on Thursday.
"But why not let that process run out? Because a part of this whole scenario has to be -- satisfy the public that there's been a full and fair airing of everything, that all concerns have been addressed."

How Trump keeps sabotaging his own defense 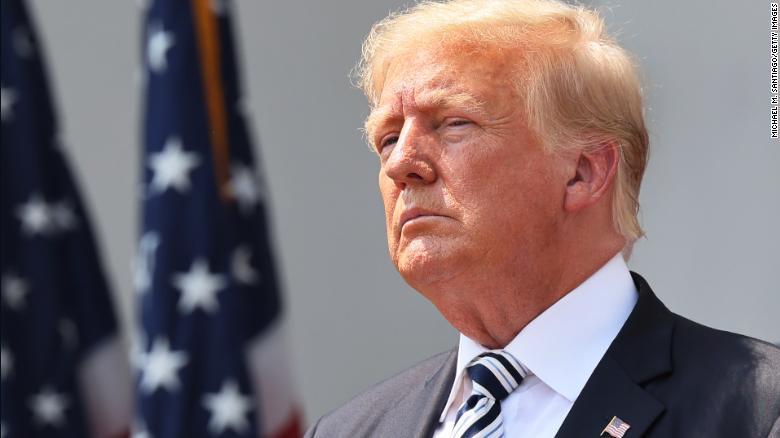 Fact check: Trump's false and uncorroborated claims in response to the FBI search
At the same time, however, Wednesday's filing also threatened to backfire since it appeared to admit to the transgression of which Trump is accused -- keeping classified information at his home. This could be another self-inflicted legal blow. Much like the revelations by the House select committee investigating the January 6, 2021, insurrection, the longer the process goes on, the more damning it seems to become for Trump.
While the ex-President has succeeded in politicizing the investigation, and uniting much of the GOP behind him, his gambits so far have often only revealed more and more damning evidence about his own conduct.
The Justice Department, meanwhile, seems to be constantly outwitting Trump's politicized and emotional defenses, which typically fail to address substantive legal issues.
The most concrete example of this is the remarkable legal filing by the DOJ on Tuesday night that argued that highly classified material was "likely concealed and removed" from a storage room at Mar-a-Lago. In a staggering photo, the filing showed document title pages bearing highly classified markings on the floor after they were found on the former President's property. The DOJ filing also suggests that Trump's lawyers misled the FBI when they attested that all secret documents had been removed earlier this year, a potential trigger for obstruction charges.
What is striking about this is that Americans would never have had this level of insight into the case were it not for Trump himself.
"The response that the Justice Department gave was perfectly appropriate," conservative attorney George Conway told CNN's Pamela Brown Wednesday. "The Trump people just basically asked to be punched in the face and they were punched in the face by the response," Conway said. 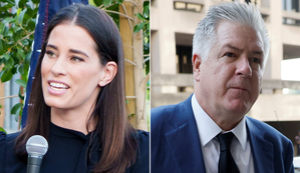 Trump's attorneys face scrutiny over level of cooperation with Justice Department on classified docs
Dave Aronberg, the state attorney for Palm Beach County, Florida, where Mar-a-Lago is located, agreed that Trump's request for a special master had only worsened his position.
"This is yet another self-inflicted wound by Trump's legal team. (The special master motion) opened the gates for the DOJ to respond with a 36-page missile right into the heart of Trump Tower," Aronberg, a Democrat, said on CNN's "The Situation Room."
"You have got this response that decimates Trump claims that his team was fully cooperative the whole time. Actually, it lays out a case of obstruction."
It was not the first time that Trump had appeared to sabotage his own position.
Earlier in August, Attorney General Merrick Garland pressed for the release of a search warrant that showed classified documents were taken from his home three weeks ago. This revelation, which undermined Trump's criticism of the search and revealed that the FBI had reason to believe classified information was on the property, only took place after Trump announced the search himself, then unleashed a storm of disinformation and threats against the bureau. 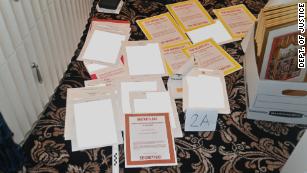 The case against Trump is starting to come into focus. Here's what we know
Like many of Trump's legal filings, Wednesday night's document seemed as much designed to address a political audience -- and to fan his campaign of fury against the Justice Department -- as to ease his legal conundrum.
There is much that remains unknown about this case. It is reasonable for Trump and his allies to demand answers about how the Justice Department handled a hugely sensitive case against an ex-president and possible 2024 presidential candidate. So far, however, there is every sign the DOJ is going by the book. The search was, for instance, not illegal as Trump claims but was permitted by a search warrant signed by a judge who had to be convinced of probable cause a crime had been committed. It is also impossible to get a full window into the case because the underlying affidavit that precipitated the search warrant has only been released in highly redacted form to protect witnesses and FBI agents from backlash and to maintain the integrity of the investigation.

Trump's 2024 calculation is getting more complicated

The fallout of the FBI raid on Trump's property has thrust the former President back into the headlines in a way that Republicans keen to focus on inflation and Biden's low approval ratings in the midterm elections do not welcome. 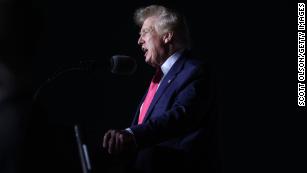 Trump weighs delaying 2024 decision as political and legal troubles grow
It has also raised questions about how the legal pressure bearing down on him will impact his likely 2024 presidential campaign.
CNN's Orr and Holmes reported that after months eyeing Labor Day weekend as the target launch date for his 2024 campaign, he has spent the last few weeks backing away from that timeline.
An onslaught of political concerns -- raised by the possibility some of his hand-picked candidates are underperforming in the midterms -- and his growing legal worries have Trump nervous about prematurely diving into the race, according to nine former and current Trump aides and allies who requested anonymity to discuss internal matters.
"Everyone was operating under the assumption that shortly after Labor Day would be the best possible time to launch, but that has changed and he's being told to deal with the FBI stuff first," said a Trump adviser.
--
****
Juan
"The Republicans are the party that says government doesn't work and then they get elected and prove it."
Posted by 1ma2t