Something to Know - 7 August

It would appear that the Democrats are either getting their act together now, or that the Republicans are weakening from all the flack being thrown about.   In either case, as Maureen Dowd, points out, this would be a good time for Joe to plan an exit strategy from his current leadership position, and open matters up to new blood with younger and bolder packaging.   Joe was the only person who could beat trump in the last rodeo, and now Joe is in a good position to hand off the baton with a sense of confidence that he did well.   The Democrats have plenty of talent, while the Republicans are mired and covered with reprehensible scum and stymied by cowardice.   This is a good time to make way for the replacements:
https://www.nytimes.com/2022/08/06/opinion/biden-re-election-2024.ht
OPINION 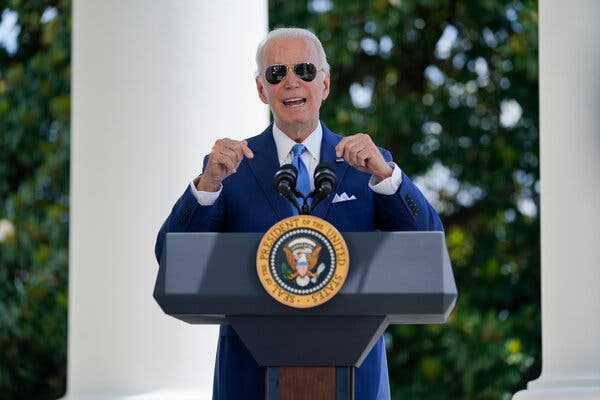 WASHINGTON — Ruth Bader Ginsburg is a cautionary tale.
She missed the moment to leave the stage, ignoring friendly nudges from Democrats and entreaties from Obama allies. She fell in love with her late-in-life image as a hip cultural icon: "Notorious R.B.G.," the octogenarian cancer survivor who could hold 30-second planks. She thought she was the indispensable person, and that ended in disaster. Her death opened the door to the most conservative court in nearly a century. Her successor, a religious zealot straight out of "The Handmaid's Tale," is erasing Justice Ginsburg's achievements on women's rights.
The timing of your exit can determine your place in the history books.
This is something Joe Biden should keep in mind as he is riding the crest of success. His inner circle, irritated by stories about concerns over his age and unpopularity, will say this winning streak gives Biden the impetus to run again.
The opposite is true. It should give him the confidence to leave, secure in the knowledge that he has made his mark.

With the help of Chuck and Nancy, President Biden has had a cascade of legislative accomplishments on tech manufacturing, guns, infrastructure — and hopefully soon, climate and prescription drugs — that validate his promises when he ran. These are genuine achievements that Democrats have been chasing for decades, and they will affect generations to come. On Monday, from the balcony off the Blue Room, he crowed about the drone-killing of the evil Ayman al-Zawahri, Al Qaeda's top leader, who helped plan the 9/11 massacres. On Friday, he came out again to brag about surprising job numbers.

Defying all expectations, the president has changed the narrative. Before, the riff was that he was too old school and reliant on his cross-party relationships in the Senate. Now old school is cool. The old dude in the aviators has shown he can get things done, often with bipartisan support.
But this is the moment for Biden to decide if all of this is fuel for a re-election campaign, when he will be 81 (82 on Inauguration Day), or a legacy on which to rest.
He could leave on a high, knowing that he has delivered on his promises for progress and restored decency to the White House. He did serve as a balm to the bombastic Donald Trump. Over the next two years he could get more of what he wants and then step aside. It would be self-effacing and patriotic, a stark contrast to the self-absorbed and treasonous Trump.
He offered himself up as an escape from Trump and Trumpism, a way to help us get our bearings after the thuggish and hallucinatory reign of a con man. Then he and his team got carried away and began unrealistically casting him as an F.D.R. with a grand vision to remake the social contract. Biden's mission was not to be a visionary but to be a calming force for a country desperately in need of calming, and a bridge to the next generation. So he's a logical one-termer, and that keeps him true to his high-minded point: What does the country really need?

The country really needs to dodge a comeback by Trump or the rise of the odious Ron DeSantis. There is a growing sense in the Democratic Party and in America that this will require new blood. If the president made his plans clear now, it would give Democrats a chance to sort through their meh field and leave time for a fresh, inspiring candidate to emerge.

Usually, being a lame duck weakens you. But in Biden's case, it could strengthen him. We live in a Washington where people too often put power over principle. So many Republicans have behaved grotesquely out of fear that Trump will turn on them. So the act of leaving could elevate Biden, freeing him from typical re-election pressures, so he and his team could do what they thought was right rather than what was politically expedient.
It would also take steam out of what are certain to be Republican attempts to impeach him should they regain the House and make him less of a target for their nasty attacks on his age and abilities. The next two years could be hellish, with Republicans tearing Biden down and refusing to do anything that could be seen as benefiting him.
Biden's advisers think if you just ignore the age question, it will go away. But it is already a hot topic in focus groups and an undercurrent in Democratic circles, as lawmakers are pressed to answer whether they think Biden should run again or not. (Axios has started a running tally.)
These are dangerous times — with inflation hurting us, weather killing us, the Ukraine war grinding, China tensions boiling, women's rights on the line, and election deniers at CPAC, where Viktor Orbán spews fascist bile to a wildly enthusiastic audience. It might be best to have a president unshackled from the usual political restraints.
--
****
Juan
Trumpism - the grift that keeps on living.
Posted by 1ma2t