Something to Know - 20 June

Yesterday's introduction dealt with the direction and expectations of the 1/6 Attack Committee.   Today's piece is along the same line, but asking you to make a suggestion as to what Chairman Benny Thompson and his select committee might, could, or will do when they are finished with their part.  It is being debated now as to what rolde the Justice Department will take.   As I see it  Attorney General Merrick Garland's options are (Prosecute, using the Committee's investigative files, plus their own investigative work) OR (Do not prosecute).   So, think about the problems associated with the final decision, and we can use what we are now learning, and what the final decision will mean to our Constitution and the Rules of Law.  I am one who has no problem with the full prosecution on any and all applicable violations, and see only one way to go.  You may have a different opinion.   Of course, this may take a longer time to play out, we need to let it all play out.   We must confront this authoritarian grab with the full force of our Constitution.

Mr. Goldsmith served in the George W. Bush administration as an assistant attorney general, office of legal counsel, and as special counsel to the general counsel of the Department of Defense.

The evidence gathered by the Jan. 6 committee and in some of the federal cases against those involved in the Capitol attack pose for Attorney General Merrick Garland one of the most consequential questions that any attorney general has ever faced: Should the United States indict former President Donald Trump?
The basic allegations against Mr. Trump are well known. In disregard of advice by many of his closest aides, including Attorney General William Barr, he falsely claimed that the 2020 presidential election was fraudulent and stolen; he pressured Vice President Mike Pence to refuse to count certified electoral votes for Joe Biden during the electoral count in Congress on Jan. 6; and he riled up a mob, directed it to the Capitol and refused for a time to take steps to stop the ensuing violence.
To indict Mr. Trump for these and other acts, Mr. Garland must make three decisions, each more difficult than the previous, and none of which has an obvious answer. 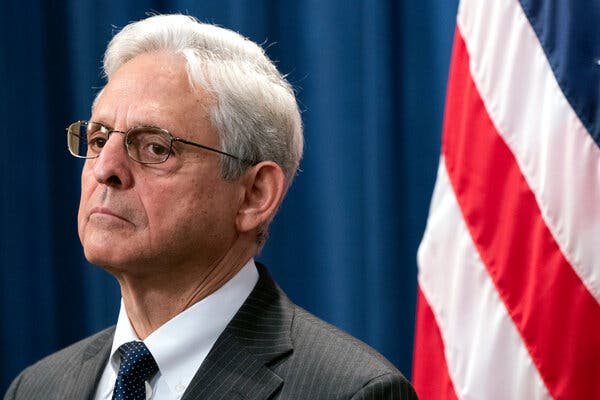 First, he must determine whether the decision to indict Mr. Trump is his to make. If Mr. Garland decides that a criminal investigation of Mr. Trump is warranted, Justice Department regulations require him to appoint a special counsel if the investigation presents a conflict of interest for the department and if Mr. Garland believes such an appointment would be in the public interest.
The department arguably faces a conflict of interest. Mr. Trump is a political adversary of Mr. Garland's boss, President Biden. Mr. Trump is also Mr. Biden's likeliest political opponent in the 2024 presidential election. Mr. Garland's judgments impact the political fate of Mr. Biden and his own possible tenure in office. The appearance of a conflict sharpened when Mr. Biden reportedly told his inner circle that Mr. Trump was a threat to democracy and should be prosecuted, and complained about Mr. Garland's dawdling on the matter.
Even if conflicted, Mr. Garland could keep full control over Mr. Trump's legal fate if he believes that a special counsel would not serve the public interest. Some will argue that the public interest in a fair-minded prosecution would best be served by appointment of a quasi-independent special counsel, perhaps one who is a member of Mr. Trump's party.
But no matter who leads it, a criminal investigation of Mr. Trump would occur in a polarized political environment and overheated media environment. In this context, Mr. Garland could legitimately conclude that the public interest demands that the Trump matter be guided by the politically accountable person whom the Senate confirmed in 2021 by a vote of 70-30.
If Mr. Garland opens a Trump investigation and keeps the case — decisions he might already have made — the second issue is whether he has adequate evidence to indict Mr. Trump. The basic question here is whether, in the words of Justice Department guidelines, Mr. Trump's acts constitute a federal offense and "the admissible evidence will probably be sufficient to obtain and sustain a conviction."

These will be hard conclusions for Mr. Garland to reach. He would have to believe that the department could probably convince a unanimous jury that Mr. Trump committed crimes beyond a reasonable doubt. Mr. Garland cannot rest this judgment on the Jan. 6 committee's one-sided factual recitations or legal contentions. Nor can he put much stock in a ruling by a federal judge who, in a civil subpoena dispute — a process that requires a significantly lower standard of proof to prevail than in a criminal trial — concluded that Mr. Trump (who was not represented) "more likely than not" committed a crime related to Jan. 6.

Instead, Mr. Garland must assess how any charges against Mr. Trump would fare in an adversarial criminal proceeding administered by an independent judge, where Mr. Trump's lawyers will contest the government's factual and legal contentions, tell his side of events, raise many defenses and appeal every important adverse legal decision to the Supreme Court.

The two most frequently mentioned crimes Mr. Trump may have committed are the corrupt obstruction of an official proceeding (the Jan. 6 vote count) and conspiracy to defraud the United States (in working to overturn election results). Many have noted that Mr. Trump can plausibly defend these charges by arguing that he lacked criminal intent because he truly believed that massive voter fraud had taken place.
Mr. Trump would also claim that key elements of his supposedly criminal actions — his interpretations of the law, his pressure on Mr. Pence, his delay in responding to the Capitol breach and more — were exercises of his constitutional prerogatives as chief executive. Mr. Garland would need to assess how these legally powerful claims inform the applicability of criminal laws to Mr. Trump's actions in what would be the first criminal trial of a president. He would also consider the adverse implications of a Trump prosecution for more virtuous future presidents.
If Mr. Garland concludes that Mr. Trump has committed convictable crimes, he would face the third and hardest decision: whether the national interest would be served by prosecuting Mr. Trump. This is not a question that lawyerly analysis alone can resolve. It is a judgment call about the nature, and fate, of our democracy.
A failure to indict Mr. Trump in these circumstances would imply that a president — who cannot be indicted while in office — is literally above the law, in defiance of the very notion of constitutional government. It would encourage lawlessness by future presidents, none more so than Mr. Trump should he win the next election. By contrast, the rule of law would be vindicated by a Trump conviction. And it might be enhanced by a full judicial airing of Mr. Trump's possible crimes in office, even if it ultimately fails.

And yet Mr. Garland cannot be sanguine that a Trump prosecution would promote national reconciliation or enhance confidence in American justice. Indicting a past and possible future political adversary of the current president would be a cataclysmic event from which the nation would not soon recover. It would be seen by many as politicized retribution. The prosecution would take many years to conclude; would last through, and deeply impact, the next election; and would leave Mr. Trump's ultimate fate to the next administration, which could be headed by Mr. Trump.

Along the way, the prosecution would further enflame our already-blazing partisan acrimony; consume the rest of Mr. Biden's term; embolden, and possibly politically enhance, Mr. Trump; and threaten to set off tit-for-tat recriminations across presidential administrations. The prosecution thus might jeopardize Mr. Garland's cherished aim to restore norms of Justice Department "independence and integrity" even if he prosecutes Mr. Trump in the service of those norms. And if the prosecution fails, many will conclude that the country and the rule of law suffered tremendous pain for naught.
Mr. Garland's decisions will be deeply controversial and have consequences beyond his lifetime. It is easy to understand, contrary to his many critics, why he is gathering as much information as possible — including what has emerged from the Jan. 6 committee and the prosecution of the higher-ups involved in the Capitol breach — before making these momentous judgments.

Jack Goldsmith, a Harvard law professor and a senior fellow at the Hoover Institution, is a co-author of "After Trump: Reconstructing the Presidency."


--
****
Juan
The Republican Party - willing agents and representatives of the Gun Manufacturing and Ammunition Industry - "the lobby".
Posted by 1ma2t