While mayhem and bloodshed continues in Ukraine, SITREP paints a picture of an ongoing Russian failure.  While the war in Ukraine can be traced back in history through the Bolsheviks, and a century-long dance with autocratic violence and despots, our own history of violence with Racism is much longer.   In recent years, racism has been a favored talking point with the far right to whip up crazies into a powerful political block.  These crazies have managed to capture a slice of the Republican pie, and have attempted to normalize anti-social behavior.  Combining pro-life, pro-gun, voter suppression, autocratic government, and white supremacy, this political ideology is producing a dangerous breed of citizens.   The laments from Buffalo, continue from those of Sandy Hook all the way to this latest bloody weekend.   It is not over, and it is going to continue until radical changes are made.  What those changes should be, or will be are dependent on when we all can agree on what are the wrongs in our Constitution, and how do we make them right, which is like saying that this is not going to happen in my lifetime, nor in my grandson's.   But, we should start talking about it now. 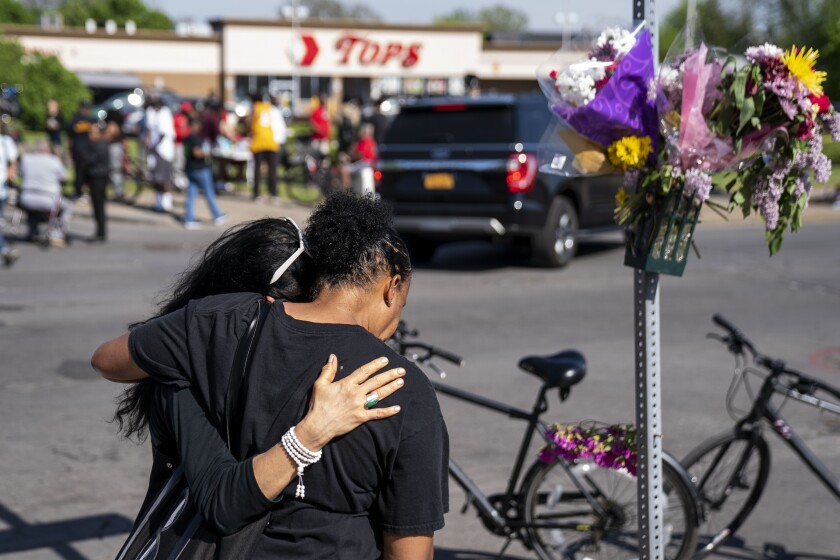 Two mourners at a makeshift memorial at the scene of a mass shooting Saturday at Tops Friendly Market in Buffalo, N.Y. Ten people were killed and three wounded in the historically Black neighborhood by a white gunman who has been charged with first-degree murder.
(Kent Nishimura / Los Angeles Times)
BY COLIN P. CLARKE
MAY 15, 2022 4:38 PM PT
In the coming days after the horrific terrorist attack in Buffalo, N.Y., we're likely to hear that the killer was a so-called "lone wolf." While the suspect, Payton Gendron, an 18-year-old white male, may have acted alone, he emerged from a far-right ecosystem that is more entrenched and pervasive than most Americans would like to admit.
A hate-filled manifesto that Gendron apparently posted online stated that he radicalized in the early months of the COVID-19 pandemic, when he began spending time on websites like 4chan and other venues soaked in far-right extremism and violent white supremacy.
The attack specifically targeted a predominantly African American neighborhood in Buffalo where the perpetrator knew he could maximize casualties. His attack killed 10 people and wounded three; 11 of the 13 shot were Black residents. The attack bears many similarities to other far-right attacks of recent years, including the 2019 massacres in El Paso and Christchurch, New Zealand. This copycat phenomenon is purposeful.
Online manifestos are to far-right extremists what martyrdom tapes are to Salafi jihadis — ways of memorializing their violent acts and ready-made propaganda for those who seek to follow in their footsteps.

Terrorists seek to learn from one another. They study one another's tactics, techniques and procedures. There is also an element of wanting to "up the ante" by outdoing one another in the number of people killed and wounded and with the aesthetics of the attacks, which are planned for maximum effect. Far-right terrorists have historically paid very close attention to how their attacks are staged, aware of how they will be judged by their supporters online and eager to impress other extremists. Gendron even conducted reconnaissance on the grocery store the day before the shooting and — like the white supremacist accused of the killings in El Paso — drove hundreds of miles to find and attack a community of color.

The Buffalo manifesto reproduces the violent conspiracy theories that motivated other white supremacists, including Dylann Roof, the terrorist responsible for a June 2015 massacre at an African American church in Charleston, S.C. Along with hate directed at African Americans, the document is filled with antisemitic tropes about Jews as part of a vast cabal responsible for immigration, multiculturalism and other public policies that these extremists claim are leading to "white genocide." In that way, there is significant overlap with the worldview of Robert Bowers, the white supremacist who murdered 11 worshippers in the October 2018 attack at the Tree of Life synagogue in Pittsburgh.
At the heart of many of the far-right manifestos is the concept of the "Great Replacement," a conspiracy theory that blames shifting demographics and immigration policies for the replacement of white populations by nonwhite populations, including African Americans, Latinos and others labeled as "invaders" by these extremists and their supporters. The concept of the "Great Replacement" is not merely in the dark, conspiratorial corners of the internet. It has been mainstreamed on cable news shows, including by Tucker Carlson, who routinely regurgitates far-right talking points that focus on the immigrant threat to white power and voter "replacement."
This ecosystem — sustained by white supremacy's centuries of deep roots in American history and society — will produce ever more violent terrorism. Yet many right-wing politicians, including Republicans in Congress, refuse to acknowledge this direct and lethal dynamic. Many still attempt to deflect meaningful conversations about white supremacy, racist ideology and domestic terrorism.


For those working in law enforcement, the Buffalo attack is another manifestation of what individuals like FBI Director Christopher Wray have warned the nation about. During the pandemic, Americans purchased record numbers of firearms and ammunition, all while spending inordinate amounts of time online absorbing terrorist theories and mired in a sea of disinformation and extremist propaganda.
After two years of the pandemic, Americans are anxious, well-armed and angry. This toxic combination, exacerbated by virulent racist rhetoric, has only begun to rear its ugly head. For now, we mourn, but at the same time, we wait helplessly for news of the next attack.

Colin P. Clarke is the director of research at the Soufan Group and a senior research fellow at the Soufan Center.
--
****
Juan
Only drug dealers, cartel bosses, scam artists, and other criminals trying to hide use burner phones.
Posted by 1ma2t