Something to Know - 8 April

Yesterday will be known as a milestone in the history of this country; the first woman of color confirmed to the Supreme Court.  For the story of how it came about on the floor of the Senate, with all of its nuanced posturing and confirmation into the annals of history, HCR has it here for you.   However, I am going to highlight the shameful sickness and disreputable conduct of some Republican senators as the nomination hearing and confirmation process rolled out.   How disgraceful can one get, as the eventual confirmation is predicted, and yet the preening and circus for what is commonly known as "the base" is your audience?   They may have forgotten that the eyes and ears of all Americans were probably watching this event, and that the embarrassment created will live on with a majority of the people across this land.  The sight of Republican Senators scrambling for the exit doors, as the applause of the chamber stood in applause as the 53-47 vote for confirmation was announced by the President of the Senate (the first woman of color), may have been too much for the Crows of Jim.
OPINION 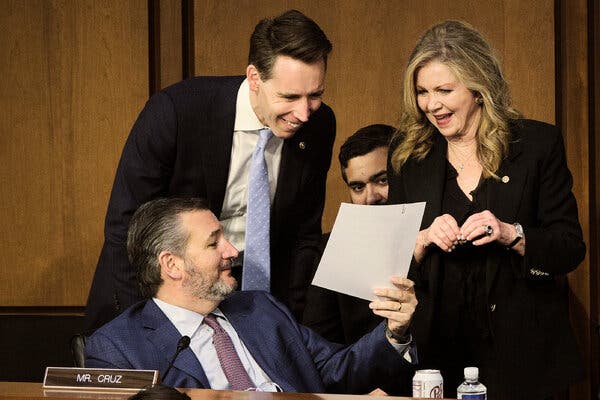 Although contentious — at times moronically so — the overall process to confirm Judge Ketanji Brown Jackson to the Supreme Court was relatively efficient, and the nomination was never in serious jeopardy. The final vote even wound up vaguely bipartisan, with three Republicans joining Democrats in supporting her.
But these high court confirmations also double as prime opportunities for members of the Senate Judiciary Committee — especially those harboring presidential aspirations — to strut their stuff for a larger-than-usual audience. When the nominee is mired in scandal or controversy, this dynamic can result in tense, illuminating exchanges. (Am I right, Justices Kavanaugh and Thomas?) But there wasn't that kind of grist with Judge Jackson, so Republicans went with misrepresenting her positions and blathering on about unrelated culture war controversies. Classic, if utterly predictable choices.
Top showboaters this time around included Ted Cruz, Tom Cotton, Marsha Blackburn, Josh Hawley and Lindsey Graham — a master of the self-righteous hissy fit. These folks really went the extra mile to turn the proceedings into a circus. So much performative outrage. So little interest in reality.
Surprising no one, Mr. Cruz was the most embarrassing of the lot. In a convoluted effort to paint Judge Jackson as a radical wokester (the asinine details of which are but an online search away for those interested), the senator whipped out a copy of the picture book "Antiracist Baby" and started tossing off bizarre, misleading questions such as, "Do you agree with this book that is being taught with kids that babies are racist?" (The book doesn't teach that.)

Perhaps Mr. Cruz was feeling nostalgic for his freshman year in the chamber, when he gave a dramatic reading on the Senate floor of another kiddie book — Dr. Seuss's "Green Eggs and Ham" — as part of a marathon speech protesting the Affordable Care Act. That speech is often mischaracterized as a filibuster. But a vote on the legislation had already been scheduled, meaning that nothing Mr. Cruz said, read or yodeled made a lick of difference. He was simply delivering an empty, blustery performance with an eye toward convincing his party's voters of his fighting chops.
Cruz and Co. played the same cynical game with Judge Jackson. They knew they didn't really have the juice to derail her confirmation. (Two cheers for Mitch McConnell for having killed the filibuster for Supreme Court picks?) They were just strutting and posturing and channeling Trumpian jerkiness to fire up the base: Check us out! Aren't we fierce and naughty?!
Happily, the clown show failed to disrupt the proceedings. This is in part a tribute to Judge Jackson's ability to remain chill in the face of even the most off-point questions. (What is her definition of a woman? Really?) It also helped that the finger waggers and foot stompers were so transparently self-serving that even their teammates recognized it. At one point, Ben Sasse felt moved to refer to "the jackassery we often see around here" with folks "mugging" for the cameras.
That said, the performers' shamelessness was impressive. After a testy exchange with the Democratic chairman of the committee, Mr. Cruz kicked back and lost himself in his Twitter feed. Nearby reporters noted that he appeared to be checking his mentions to see how he was playing on social media. Now there's a guy who takes his constitutional duties seriously.
But for Mr. Cruz, who labors under the delusion that he will one day be elected president, it doesn't matter much whether he wins or loses a particular fight or gets perpetually derided for being a self-absorbed goofball with baffling facial hair. It's all about preening for the base.

Mr. Cruz, to be fair, is hardly alone in this attitude. Even as Judge Jackson takes her hard-earned victory lap, her Senate antagonists will be congratulating themselves on all the MAGA love they surely earned. Perhaps they yearn for shout-outs along the lines of:
Thank you, @tedcruz, for exposing the antiracist baby scourge. Biggest story since Pizzagate.
Stand tall, @MarshaBlackburn. You are the definition of a REAL WOMAN. #BigHair4Eva
Don't feel bad, @LindseyGrahamSC. I often confuse Ketanji Brown Jackson with Janice Rogers Brown as well. #HonestMistake.
Hey, @SenTomCotton, I hear George Soros is a closet furry. Time for hearings? #AllDemsAreGroomers
And, of course:
You are a warrior and patriot, @tedcruz, but for the love of god get a decent shave.

You get the basic point. For those who brayed most loudly against Judge Jackson's nomination, there are plenty of rewards to reap. In today's MAGAfied G.O.P., nothing thrills quite so much as flamboyant jackassery.


The Times is committed to publishing a diversity of letters to the editor. We'd like to hear what you think about this or any of our articles. Here are some tips. And here's our email: letters@nytimes.com.
Follow The New York Times Opinion section on Facebook, Twitter (@NYTopinion) and Instagram.

Michelle Cottle is a member of the editorial board. @mcottle
--
****
Juan
Only drug dealers, cartel bosses, scam artists, and other criminals trying to hide use burner phones.
Posted by 1ma2t